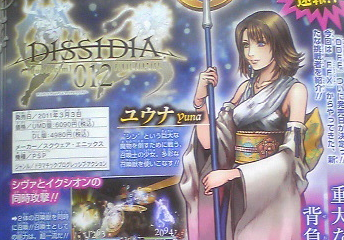 The latest issue of the Japanese gaming magazine Shonen Jump has confirmed that the Final Fantasy X character, Yuna, will be included in Dissidia 012: Final Fantasy.  A scan from the magazine shows a screenshot of the game, with Yuna controlling Shiva and Ixion for a double attack, while also summoning King Bahamut.

According to the magazine, Square have also included a new costume for the FF7 character Tifa. Also, we will be able to create our own individual quests in the game.

Dissidia 012 will be releasing in Japan on March 3, and in the US and UK this Spring.