Those who can’t do, coach.

Posted By Will Borger | On 11th, Nov. 2013 Under Article, Reviews | Follow This Author @will_borger

Like previous entries into the franchise, Football Manager 2014 charges you with becoming the head coach of any one (or more, should you so desire) of the world’s football clubs, and leading them to glory. As the head coach, you’re responsible for training your team, acquiring new talent, telling your scouts what, where, and who to focus on, working with the team’s board, assigning duties to your assistant coaches, dealing with the press, and any and all of the responsibilities that come with coaching a professional football (or soccer, depending on your location) team. 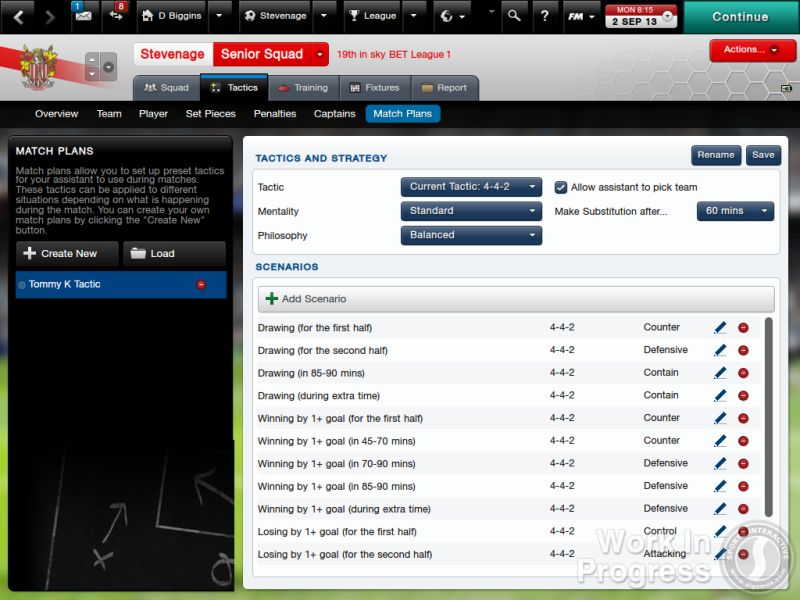 "Sports Interactive has also made everything easier to navigate, and you’ll no longer need to go through a series of menus to take actions that are offered or recommended by your inbox. Need to see a report from your scouts? One click from the email in questions sends you straight it."

As you might imagine, this can become extremely complex. Fortunately, Football Manager makes the process as easy as it can. The game features a robust tutorial which will walk you through most of the game’s menus, as well as an in-game manual that can be accessed from the main menu. No amount of tutorials or instructions can teach you everything however, especially in a game as deep as Football Manager, and new players will have to spend a significant amount of time with the game’s systems before everything clicks. As with any game, the best way to learn is to play.

Thankfully, the series has never been easier to get into. As usual, the inbox is where you’ll spend most of your time. From here, you’ll field emails from your assistant coaches, answer questions from the press, keep track of your upcoming games and scouting reports, manage your subscriptions, and much more. Things are more or less the same as they’ve been in previous years, though there have been some minor enhancements. Categories are now color coded, and emails with similar information are grouped together when possible.

Sports Interactive has also made everything easier to navigate, and you’ll no longer need to go through a series of menus to take actions that are offered or recommended by your inbox. Need to see a report from your scouts? One click from the email in questions sends you straight it. Need to make a change to the team’s training regime to take advantage of the other team’s weak defense? One click and your guys are focusing on their attacking. You can’t handle everything this way, but nearly everything, from the stats of an individual player to your schedule are a click away from your inbox. The menu layout here is extremely clean and easy to follow, even in the other areas, and finding things is a snap once you get used to the game’s layout. 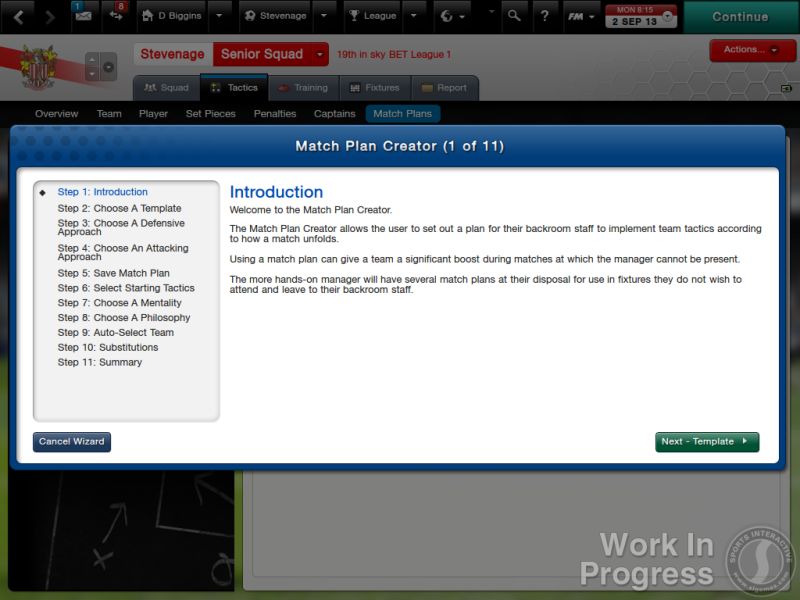 "You’ll have to understand your players, the board, the press, and your coaches to make the most of these interactions and while it’s nice to be able to address these things, the options are limited, and you’ll often find yourself answering the same questions the same way, over and over and over again."

When you’re not navigating your inbox, or telling your team what to focus on as they train, you’ll often find yourself in meetings with board members, players, your assistant coaches, and even the press. The game will provide you with various options to choose from, depending on how things are going in the game.

You’ll have to understand your players, the board, the press, and your coaches to make the most of these interactions and while it’s nice to be able to address these things, the options are limited, and you’ll often find yourself answering the same questions the same way, over and over and over again. Thankfully, this interaction is fairly limited, and like everything else, you can assign it to one of your other coaches if you don’t want to deal with it.

In fact, the only time you’ll really have to deal with the personalities of others is when you’re trying to acquire another player. While it largely comes down to the contract on offer, each player and agent have their own personalities. Some want trades to be done as quickly as possible, and as big of a cut as they can get. Others are aren’t trustworthy, and will talk up their players for far more than they’re worth. While you can delegate this to your other coaches, you’re more likely to close a deal yourself, so paying attention to these differences is crucial. 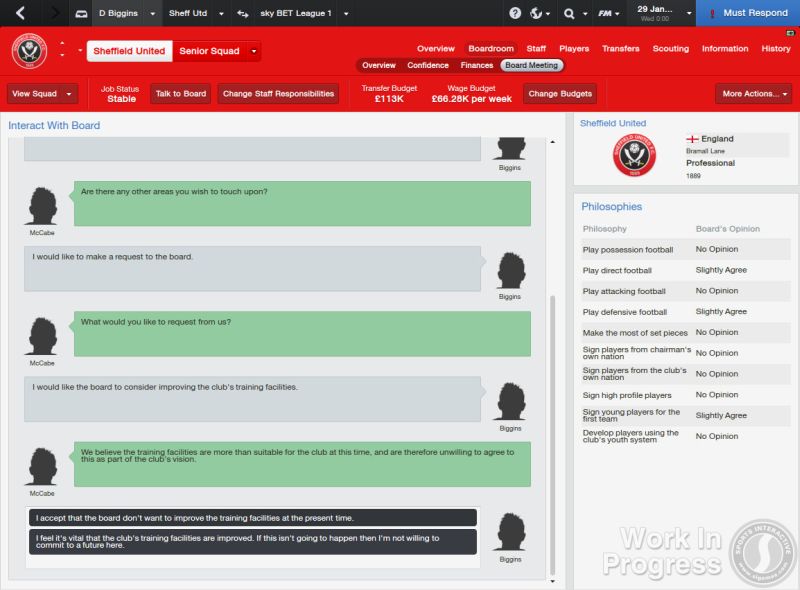 "Your assistant coach will feed you information throughout the match, ranging from how well a specific strategy is working to how well specific players are playing, and what the other team is doing well or poorly."

Of course, you’ll have to decide what to do with your players once you acquire them, and Football Manager is no slouch in that department, either. If they’re not good enough for your team, but have potential, you can loan them out to other clubs so they can continue to grow as players, or put them in as back up so they can gain experience with your team. Every decision you make in Football Manager has consequences, and you’ll have to take everything into account if you want to build the best team you can.

For example, it might be a great idea to sign a foreign player to shore up a weakness in your defense, but if he doesn’t speak the team’s native language, he may have a hard time acclimating to his new home. If, however, you have another player who speaks the same language he does, things are significantly easier. And of course you’ll also want to make sure a new acquisition gets along well with your team. A football team divided against itself cannot stand.

Once you’ve got your team set up just the way you want it, it’s time to play the game. You can change nearly anything about the way your team is playing at any time, and the interface itself is extremely easy and simple to use, and helpful to boot: the game will inform you if you accidentally make two decisions that conflict with each other, or you simply do something that you shouldn’t, such as playing someone in a position they are not comfortable in. In addition, your assistant coach will feed you information throughout the match, ranging from how well a specific strategy is working to how well specific players are playing, and what the other team is doing well or poorly. Similar to your inbox, all of your assistant coach’s recommendations can be implemented on the fly via a handy dropdown menu, meaning you can change major aspects of the game without leaving the match itself. 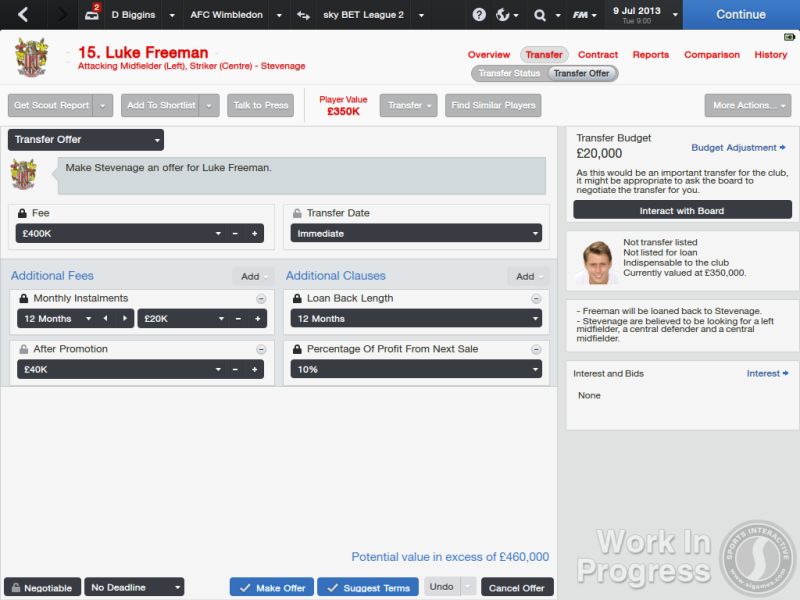 "Standard Career mode offers the most options and takes the most time, while Classic mode cuts much of the fluff, significantly reducing the amount of press interaction, meetings, and stat management, meaning you can complete entire seasons in a relatively short amount of time."

Of course, the enemy AI will counter any changes you make, and they’ll often do it in a frighteningly efficient manner, finding holes in your strategies with ease and managing to tie up games you thought were in the bag. The game itself is rendered very well in matches. The graphics are fairly rudimentary, and the players look awkward when they’re not on the field chasing the ball, but the game looks great in motion, and even better in slow motion replays. You can choose how much of the match to watch, and the speed at which its shown, allowing you to have as much or as little control over the match as you please, while maintaining a consistent visual standard. In all, it manages to look like football in a way few games can manage.

Of course, the game offers a variety of modes to play. Standard Career mode offers the most options and takes the most time, while Classic mode cuts much of the fluff, significantly reducing the amount of press interaction, meetings, and stat management, meaning you can complete entire seasons in a relatively short amount of time. There’s even an “Instant Results” option for the matches you don’t feel like managing. Classic mode also features a simpler interface that’s been redesigned to match its less-stat hungry style, and amazingly enough, it’s even better than the original.

Of course, you can take the game online, too, and it operates just as smoothly there as it does offline. The online mode includes both versions of Career mode, and also allows you to play one-off matches. Players can drop in and out as they please, and you can apply timers to ensure that someone doesn’t wander off while in a menu and stall the game indefinitely. There’s also a Challenge mode, should you be brave enough to tackle it, which offers a wide variety of situations for you to overcome. In addition, additional challenges can be created and shared in the Steam Workshop. 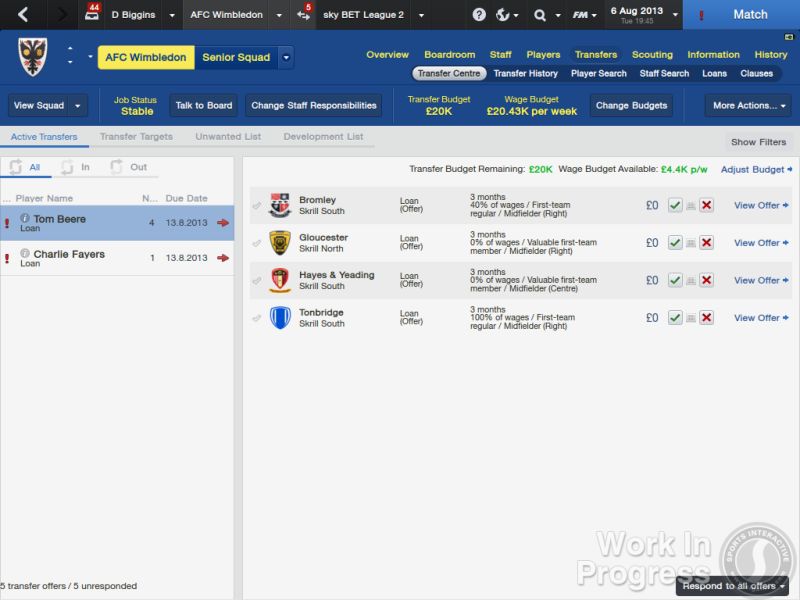 Unfortunately, no game is perfect, and Football Manager comes with a few disappointments as well. Crashes are frequent and auto-saves random, and there’s been more than one occasion where I’ve bested a difficult team only to have the game crash on me, and destroy my progress. In addition, the game’s sound design is severely lacking; you’ll only ever hear the crowd and the whistle during a match, and nothing outside of it. There’s not even any menu music. And of course, the learning curve is extremely steep.

Despite those flaws, however, Football Manager does the impossible: it makes navigating a bunch of menus fun. Managing a team is incredibly addictive and wonderfully executed, and the game rarely gets in your way. You have as much or as little control as you want here, and it’s incredibly easy to find yourself saying “Just one more match” well into the early hours of the morning. And all of this from just navigating a series on menus. If that’s not an accomplishment, I’m not sure what is.

Incredibly addictive tactical gameplay. Well-designed menu system. Managing a team is great fun. Matches are well animated. Freedom to have as much or as little control as you want. Meangingful difference between Classic Career and Career mode.

Football Manager won’t appeal to everyone, but the tactical gameplay here is well-designed and extremely addictive if you can get past the lack of “real” gameplay. 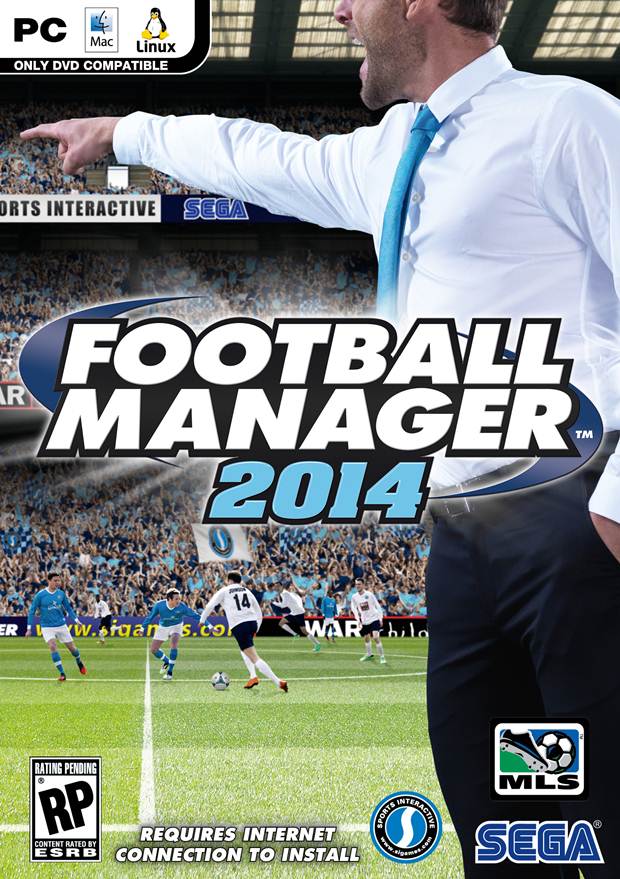