Forza Horizon 4 is simply beautiful and a blast to play.

There is something beautiful and intriguing about Playground Games and their ability to deliver high class looking open world racing games every two years or so. Their pedigree with the Horizon brand of the long running Forza series has been nothing short of astonishing. Beginning all the way from their first game in the series on the Xbox 360 to 2016’s exceptional Forza Horizon 3 on the Xbox One and later patched for the Xbox One X earlier this year, fans had many questions whether Forza Horizon 4 will truly surpass one of Xbox One’s best rated exclusive, and boy, they have not only managed to do that but they have also absolutely smashed the threshold set by it. Forza Horizon 4 is easily the best racing game of this generation and one of the most beautiful looking games you can play on the PC, Xbox One X and Xbox One.

When the game begins, you are introduced to four seasons giving you a taste of what is in store but once you are done you will have to gain Influence to unlock further seasons until making it to the Horizon Roster. From there on, the transition from one season to other will be seamless which will change every few days. The Seasons mechanism is easily one of the best and unique features we have come across in a open world game, be it a racing game or not.

Playground Games have also improved the engine’s weather system resulting into better looking rain effects which further impacts the tracks. Tire marks on muddy tracks look great thanks to an enhanced implementation of deformable terrain and parallax occlusion along with some of the most impressive world asset streaming tech we have seen in an open world game. No doubt, there is some texture pop-in across all three platforms but the streaming tech is fairly seamless and when you put it within the dynamics of four different seasons, the tech behind the same feels even more impressive.

Then there are the vehicles themselves and it goes without saying that they all look spectacular up-close. The cars are highlighted by high quality textures work coupled with material based shaders along with material reflection parameters result into extremely detailed body work. As you must be already aware, the Horizon engine is completed based off of physical rendering which allows the front and rear headlights and immediate area/object to accordingly react and reflect according to the light source. Furthermore, the case covering these lights have their own translucency property giving the cars a further boost in terms of detailing. Everything from the bumpers to the wheels, each car in the game feels ever so close to photorealism.

As noted before, we tested the game on all the platforms which are Xbox One, Xbox One X and a PC. Let’s talk about the PC version which to no one’s surprise is the platform to play Forza Horizon 4 on. The developers recommend a PC with specs that include 12GB of memory, NVidia GTX 970 OR NVidia GTX 1060 3GB OR AMD R9 290x OR AMD RX 470 and Intel i7-3820 @ 3.6Ghz. Our test build included a GTX 1080Ti, 16GB of GDDR4 memory and a Ryzen 1700x processor. It goes without saying that our build goes beyond the recommended requirements and we faced next to no performance issues. Although technically built for the Xbox One, Forza Horizon 4 on the PC features a wide range of graphics settings which includes but not limited to motion blur, deformable terrain quality, lens effect, SSR quality, particle effects quality, MSAA, FXAA, dynamic geometry quality, and night shadows. The game ran really well with absolutely no frame rate drops which isn’t a surprise given the specs that we were running this game on. 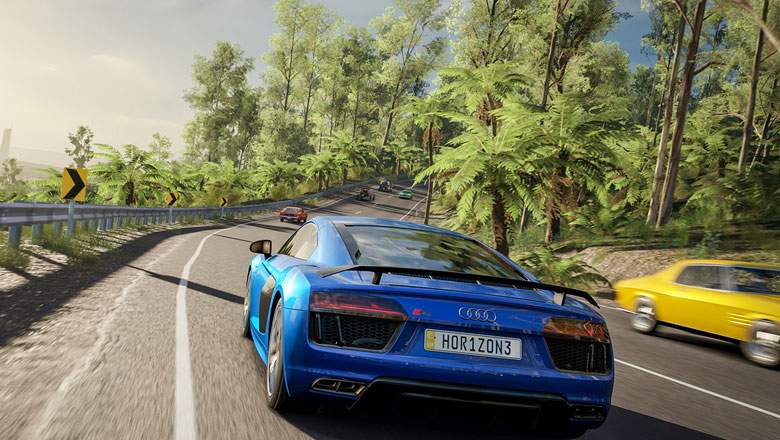 However, consoles are where things get a bit interesting. For the first time ever, a Horizon game on the Xbox One X features two different kinds of settings. Performance mode allows the game to run at 1080p and 60fps whereas the Quality mode renders the game in native 4K at 30 fps. For an open world game which is as intricately detailed as Forza Horizon 4, the inclusion of a Performance mode is a superb achievement by Playground Games and what is even more amazing is that the engine manages to achieve these targets regardless of how taxing the on-screen action could be. Yes, Forza Horizon 4 runs at a rock solid 60 frames per second at 1080p on the Xbox One X and we witnessed next to no frame rate drops.

The 4K mode also maintains a stable 30fps on the Xbox One X but is apparently the better mode in terms of visual fidelity and graphical parameters. Several parameters like motion blur, anisotropic filtering, reflection quality are much better in Quality mode. It’s hard to recommend which mode you should play on as each mode has its own advantages but the prospect of experiencing a brilliant open world racer at 60fps is definitely more enticing than 30fps. In terms of difference between the PC and Xbox One X versions, the former has better world asset streaming and improved draw distances along with enhanced motion blur compared to the latter.

The base Xbox One, purely from technical specifications point of view doesn’t really have the numbers of the Xbox One X and a high-end PC. Targeting a full 1080p resolution along with a 30fps cap, Forza Horizon 4 on the base Xbox One is still a looker. However, we noticed some frame rate drops during stressful situations but for the most part performance was fine. As expected, both the Xbox One X and PC versions have numerous advantages over the Xbox One build but when viewed in isolation, the game is an absolute stunner and perhaps one of the best looking games on the system.

In conclusion, whichever platform you play Forza Horizon 4 on, you are guaranteed to receive the best possible experience. There isn’t really a winner here since the game does justice to each platform it runs on but purely based on technical numbers, PC is the way to go if you have the hardware. For those who primarily play on the base Xbox One, Forza Horizon 4 is the best reason to upgrade to or buy an Xbox One X.