Forza Motorsport 7: A True Graphical Showcase For The Xbox One

Our graphical analysis of Forza Motorsport 7 on Xbox One which also includes a head to head comparison with the Xbox One. 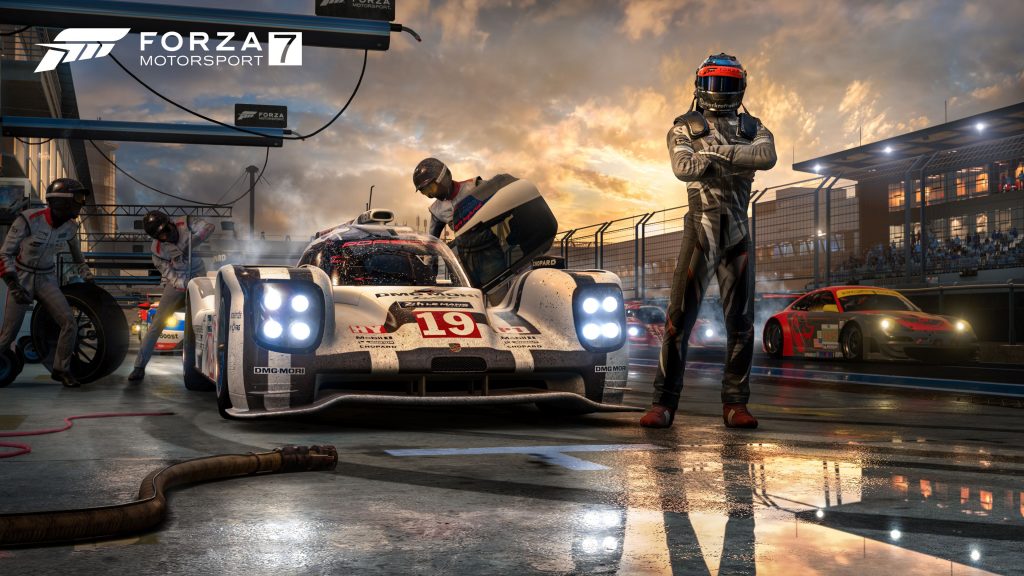 Let us get one thing right out of the way. Forza Motorsport 7 is the best looking racing game of this generation on any console. One look at the Xbox One version and you have to wonder how did Turn 10 studios managed to pull this off. It’s like the Xbox One has some secret sauce and Turn 10 managed to exploit it to deliver a phenomenal looking racer. The situation is even more amusing when one considers how the Xbox One was basically written off as a inferior console. As time goes by, developers get well versed with hardware…this is a well known fact and Forza Motorsport 7 is the ultimate testament to this.

Just like its predecessor, Forza Motorsport 7 runs a native 1920 X 1080 resolution with a rock solid 60 frames per second. Even during the most intense situations, even when the player selects 24 cars on the grid and even during stormy weather, the game manages to look stunning at an almost flawless 60 frames per second. With beautiful and smooth gameplay, controlling cars in the game feels like a dream. Forza Motorsport 7 almost feels like a next-gen game on a current gen console and we can’t wait to see how it performs on the Xbox One X.

Forza Motorsport 7 is also a part of Microsoft’s Play Anywhere initiative. So if you buy the game digitally on either the PC or Xbox One, you can play and continue your progress on either platforms. Forza Motorsport 7 is by far one of the best looking PC games of this generation, and this is expected given how gorgeous Forza Motorsport 6 looked on it. However, in order to truly enjoy the game in its full graphical splendour, one needs a rather beefy PC. The developers recommend an NVIDIA GTX 670 or NVIDIA 1050 Ti, 8GB of memory and an Intel i5 4460 clocked at 3.2GHz. The graphical settings are quite deep as well. This includes resolution scale, particles resolution, car model quality, mirror quality, MSAA quality up to 8x, procedural quality and much more. Turn 10 have really poured their love into the PC version and the amount of options really shows that. However, performance, unfortunately, is a totally different story.

Look, our test build absolutely smashes the recommended requirements. Our PC includes a NVIDIA GTX 1080Ti, 16GB of GDDR4 memory and a Ryzen 7 1700 CPU. Suffice to say, this is essentially a 4K/60fps ready build and it shouldn’t have many problems to max out most games at Ultra setting at 1080p resolution. Unfortunately, Forza Motorsport 7 on this PC ran into a number of problems. First up is performance. For the most part, we are largely looking at a locked 60 frames per second experience but we witnessed numerous drops, reducing the average frame rate to below 60. Furthermore, the game crashed once. We weren’t able to found the exact cause behind this crash but it happened while a race was going on. With such an impressive build, our expectations were sky high when we benchmarked Forza Motorsport 7 at 1080p/60fps. The end result is rather disaappointing. As of right now, Turn 10 are working on improving the PC version but given the feedback they received from Forza Motorsport 6 and to an extend from Forza Horizon 3, we thought they were better equipped to handle these kind of situations with their latest game.

However, a side by side comparison between the PC and Xbox One version clearly indicates the superiority of the PC version. On the one hand, we have the Xbox One suffering from jaggies, lower quality reflections and particle resolutions and on the other we have the PC version which is heads and shoulders above its console counterpart with improved lighting, texture quality and filtering. This is rather amazing becase as we mentioned before, the Xbox One version looks amazing but the PC build takes that and adds more layers of visual enhancements on top of it.

So overall, we are very pleased with the console version of Forza Motorsport 7. At this point, we will recommend the Xbox One version due to its stable performance. Obviously, the PC version totally trumps its console counterpart, but its performance issues is currently dragging down the experience.