A very straightforward remake misses some opportunities, but delivers a fun enough outing for genre and series fans nonetheless.

The Switch has become a veritable cornucopia of strategy RPGs and tactics games, a genre that has otherwise been dreadfully underserved in the console space. Just this year alone, it’s received the excellent Triangle Strategy and the compelling and experimental The DioField Chronicle. And now, we have a remake of one of the pioneers of the genre hitting Nintendo’s system.

Front Mission 1st, which was a remake of the Super Nintendo original game, is hitting the Switch, with a surprising amount of care and effort having been put into making it look modern. In terms of graphics and presentation, it obviously does not stand toe to toe with modern, big budget productions in the genre, but it looks surprisingly good, and its SNES and PS1 roots (the PS1 being what the remake hit in 2003 – Square Enix really hasn’t handled this IP too well) aren’t immediately apparent (and quite possibly not apparent at all if you’re not familiar with them to begin with) – which is pretty much the highest praise I can give a graphical upgrade like this.

It’s also loaded with content. The original Front Mission followed the story of Captain Royd of the OCU, one of two warring entities in the near future comprised of various countries coming together, on a quest to track down the one responsible for the death of his fiancé in an ugly mission gone bad. It was a meaty story in and of itself, but the remake added to that further, by adding a second campaign where you follow the USN (which, it goes without saying, is the second of the two factions). Both campaigns are available here, and to have a proper understanding of the story, it is greatly recommended that you go through both. Each gives you half the picture of what really is going on in this surprisingly intriguing near-future Earth that the games set up, and to truly understand, you need to play both campaigns, and piece together how the stories and revelations of each fit with the other. 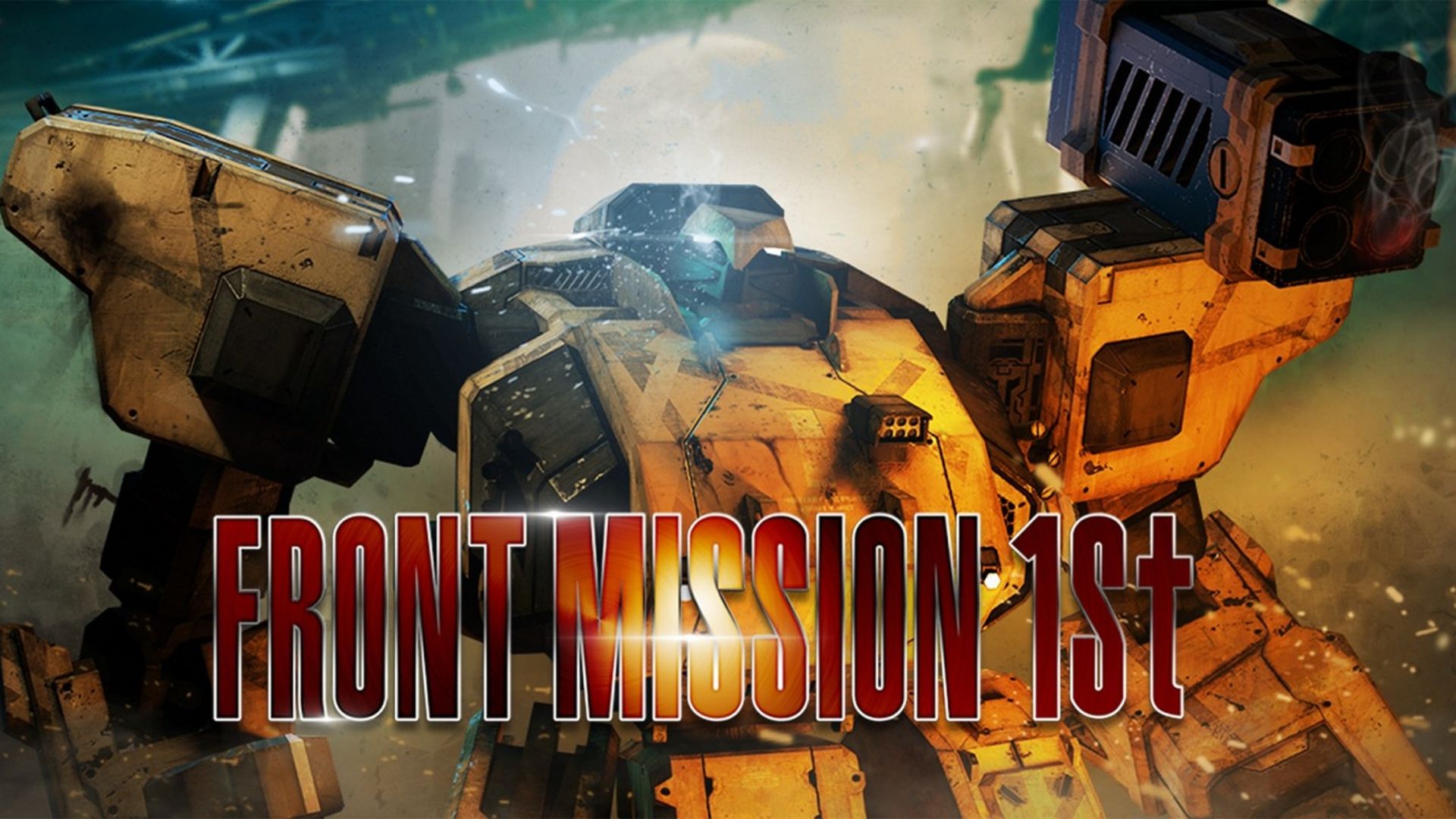 "Front Mission 1st shines when it lets its character and world take the centerstage, particularly with the upgraded visuals, which put a better face on the game than it has ever had before. A remixed soundtrack also helps, with its rousing melodies adding heft and nuance to the events depicted on the screen. However, one big miss here is the lack of full voice acting."

This remains the game’s strongest point – Front Mission 1st shines when it lets its character and world take the centerstage, particularly with the upgraded visuals, which put a better face on the game than it has ever had before. A remixed soundtrack also helps, with its rousing melodies adding heft and nuance to the events depicted on the screen. However, one big miss here is the lack of full voice acting. Given that the game’s strongest point is very literally the story, no voice work here puts a dampener on things. It’s something that stands out even more when you consider that Square’s other great strategy games this year benefitted from stellar voice work. Front Mission 1st‘s remake was licensed to a third party, and very clearly not a high budget production – which is presumably why it lacks the voice work that would have otherwise further elevated one of the game’s strong points.

The fact that it was made on a budget shows in other places too. Chief of these is the gameplay and mechanics – these have seen no change. While the strategy and tactics RPG genre lay dormant for a while before this current resurgence, it has still come a very long way from the original Front Mission, or even the PS1 remake, and those things are simply not accounted for by this new release, which plays and is balanced like an early 1990s strategy RPG would be expected to be.

This isn’t a huge issue in and of itself, especially if the core gameplay is fun to you – which it certainly is to me. Front Mission allows a frankly overwhelming amount of options and variables for the player to consider. From being able to build out your mech suit in extremely granular detail between battles to make it a force to reckon with, to battles against other Wanzers (the mechs in this game) having you keep track of multiple different health bars (one for their body, and then one each for their limbs, with the health bar you take out deciding how the opponent gets damaged – disabling a limb means they won’t fire with the weapon in that hand, while to truly defeat them, you need to take their body HP down to 0). This adds an element of dynamism to combat, in theory, and makes battles a tense affair with a lot for you to keep track of.

It’s not a perfect system – in part because you actually get no control over it. See, you can’t really choose what to target, your weapon randomly locks on to a limb or body part to target. This can lead to some awkward situations where you are this close to destroying an opponent, but simply can’t because your weapons refuse to lock on to the body core and keep targeting other limbs instead. It’s actually not the worst, usually I found things to be delayed by a turn or two at worst, and the unpredictability was adding enough dynamism to battles that I didn’t hate not having this control – but any serious play of this game would fall apart right at this step. You cannot expect the player to properly plan and strategize if they can’t even control their own moves. 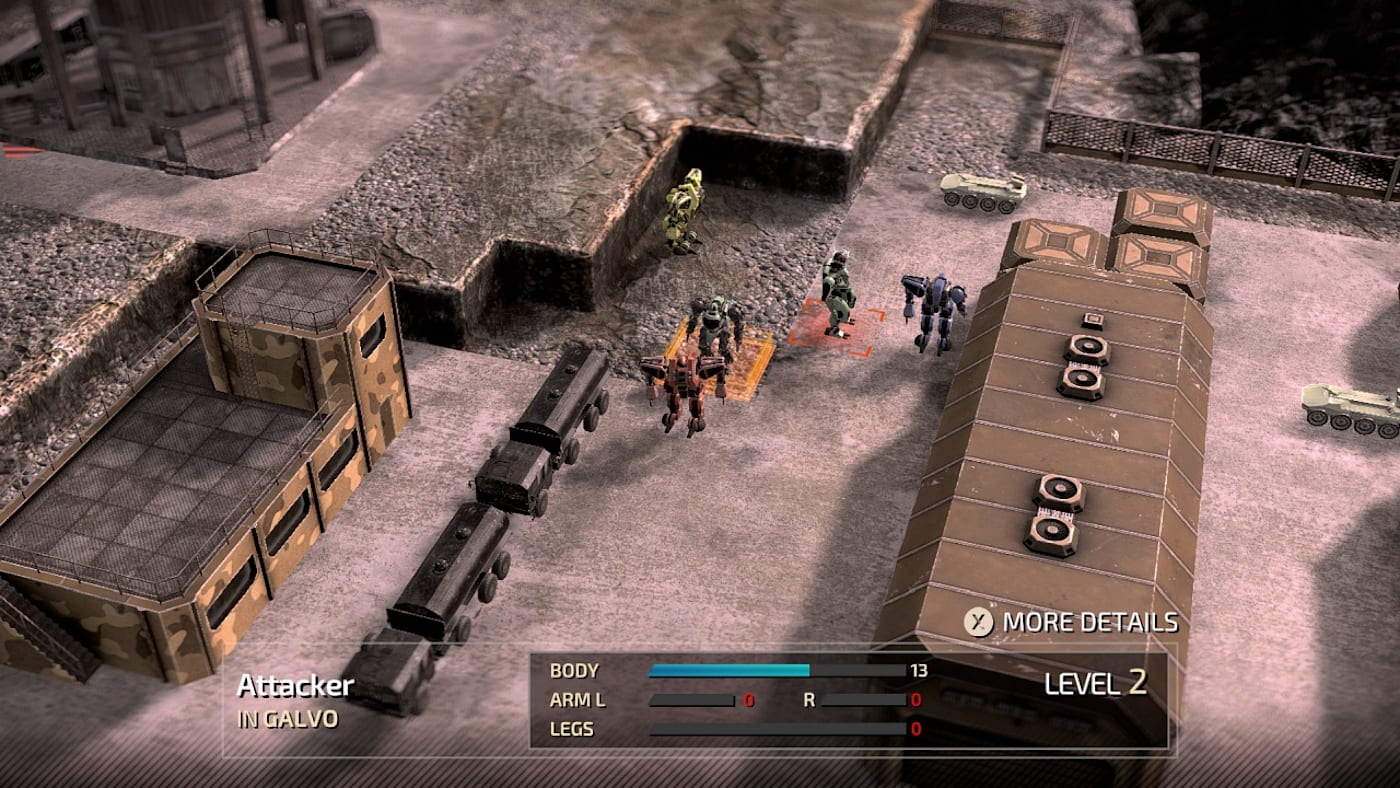 "Whether or not you like this comes down to your own personal tolerance for not having total control."

Whether or not you like this comes down to your own personal tolerance for not having total control. Personally, I didn’t mind it. Like I said, it kept me on my toes in battles, kept things unpredictable, and typically I got the outcome I wanted at most a turn or two after I had originally planned on it. But, equally, as I said, if you want to engage with the game seriously, then it becomes much harder to do when it’s not exactly playing fair.

This early 1990s era balance is evident in other areas too – the map design is fairly standard, and isn’t an active factor in battles as much as it would become in future games in the genre. The game allows multiple options to totally undermine its economy, with a facility that allows you to grind for funds with pretty much no limit (on the flip side, brute forcing your way through the game with overpowered mechs remains endlessly entertaining, and can also help sand over some of the previously mentioned balance issues as well). The 1990s era design is apparent elsewhere too, such as with the UX and UI, which lack a lot of the QOL that future games in the genre would go on to have.

Honestly, Front Mission 1st could have used a proper, full remake that also modernized its mechanics, balance, and UX, added in some voice acting, and generally overhauled the game to match modern standards. I would have loved to play that. What we get here instead is sort of like a time capsule – it’s a very old game given to us almost as is, just in a shinier wrapper so that we don’t realize it until it’s too late. It’s not a huge issue for me, because the game at its core remains fun enough that I don’t mind putting up with some of the more abrasive eccentrics, and because the story and characters are surprisingly compelling and enough of an incentive to keep going – but anyone who chooses to get into this game should first calibrate their expectations.

One day, whether by way of a full fledged proper remake, or a new entry in the series, we might get that modernized take on the Front Mission formula that series and genre fans want so badly. For now, this is what we get – Front Mission 1st Remake on the Nintendo Switch is a fun enough game for genre fans and enthusiasts, one that gives us a look at the early days of the genre without really messing with things much.

The lack of voice acting hurts the game's biggest strength; the lack of modernized balance, UX, UI, and mechanics can be frustrating for new players.

Final Verdict:
GOOD
Front Mission 1st would have benefitted from a full remake to address a lot of quibbles that are holdovers from the era it is originally from; however, even as-is, warts and all, the premise and core loop remain fun enough that series and genre enthusiasts, at least, will get a fair bit out of it.
A copy of this game was provided by Developer/Publisher/Distributor/PR Agency for review purposes. Click here to know more about our Reviews Policy.