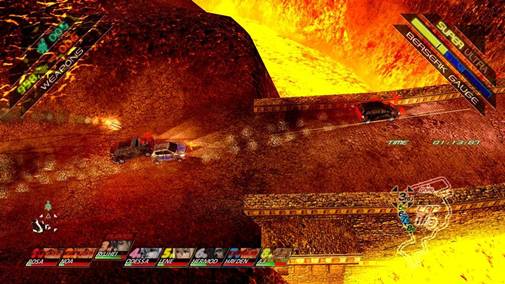 I-Friqiya has announced a racing game: Fuel Overdose, for Playstation 3 and PC. The game has been in development for 18 months. Check out some details for the game from the press release below:

What is Fuel Overdose?
Fans of action racing games for ages, we have played a lot of them over the last 15 years and we started our journey wanting to bring back a certain idea of the genre but also to propose something completely new and fresh. We focused our efforts on trying to provide innovative and fun action/combat game mechanics and bring in a tactical touch to the genre.

Put simply, we like to think of Fuel Overdose as a “Tactical- Action-Racing” game:

Action: From the large array of upgradable weapons one can expect for such a game, Fuel Overdose also features innovative and fun weapons and game mechanics such as a grapple that can be used both offensively and defensively, bomb detonators along the road, and a whole fighting system that offers unique skills moves and attacks to each character of the game.

Tactical: With Fuel Overdose, the choices made before and during the race have a real impact on your chances of success. The game leaves no room for luck and features a resource management system for the vehicles and weaponry, a super/ultra attack gauge inherited from the versus fighting genre as well as auction events than can bring a decisive edge to win races.

Racing: Fuel Overdose is not a combat-arena game, it is, as its core, a racing game that requires driving skills and that allows and values different racing styles and a diverse garage of vehicles, themselves all customizable to improve their driving and performance.