Posted By Shubhankar Parijat | On 02nd, Jan. 2012 Under Feature, Slider 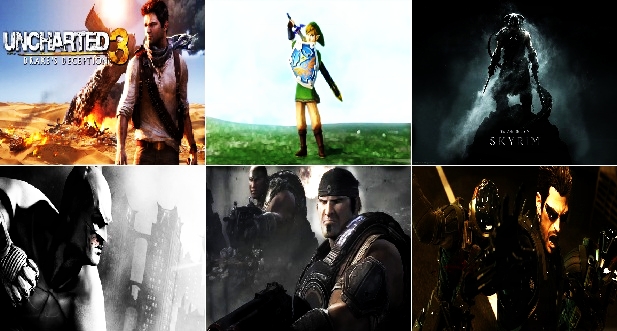 I think you’re all pretty tired of hearing just how great a year for gaming 2011 was by now. That face has been pretty much established by now. We’ve done so many lists and features over the past one month, recapitulating everything that was good about 2011, but the one thing we haven’t done, surprisingly enough, is talk about what were the best games that we played in the past 12 months. To be truthful, many of us have been avoiding that topic, because it’s hard to pick just a set number of games. 2011 was, at the risk of being repetitive, an absolutely wonderful year for gaming, and we got to play so many good games. Picking just a few of those (25, in this case) and actually ranking them would be a huge pain in the ass, and we would have to, no matter how much it hurt us, leave out a lot of the games that may deserve to be up here, if not as much as the ones that did make it.

But we managed to do it, somehow. It was hard. As I said, we left out plenty of games, and we weren’t all too happy about not including them, but at the end of the day, picking just 25 good games out of what is nothing less than an entire battalion can be a bit tough. So if you don’t see a lot of games up there that you might be expecting (Mortal Kombat, Marvel vs Capcom 3, Saints Row 3 and others), don’t get mad at us. Just leave us your feedback and let us know which games we missed out. That’s why we have a comments section, after all!

Bastion is, most probably, one of the best Xbox Live games ever, up there in the rankings with the likes of Shadow Complex, Limbo and Braid. It’s action packed, it’s deep, it’s addictive, and it hasimmense amounts replay value- you’ll be returning not just to play through the multiple endings, but to start a new game with your old data via “New Game +” as well. One thing is for sure- once you bask in the glory and magnificence of Bastion, you won’t want to pull out (no innuendo intended).

The team at Creative Assembly have truly whipped up a masterful game this time round. Setting out to restrain some of the excesses of previous titles, Shogun 2 takes a step back and retreads the ground of its youth in Feudal Japan. A game as smoothly coded as it is streamlined, it is easily the most immersive Total War since Rome and will delight long-time fans of the series and invigorate an entirely new set of followers.

Dead Space 2 is a game that you should invest your money in, without any second thoughts. The single player campaign is exhilarating with even more scares and chills than there ever were in the first game. The game also manages to take a look at the tragic life of Clarke and hence puts more emphasis on the storyline this time around, one of the things that we think was missing in the original. Add to that some amazing zero gravity sections and insane weapons, and you have a winner on your hands. It will be interesting to see what direction the series will take with the inevitable Dead Space 3.

FIFA 12 is about as close a football game can get to realism without being on the field itself. With a host of new features, the same great presentation that FIFA is known for and a ton of refinements to the already strong gameplay of the FIFA series, FIFA 12 is a must buy for all people who have even the tiniest bit of knowledge of the sport. FIFA 12 not only manages to beat FIFA 10 as the best in the series, but also comes out as the best game in the sports genre yet.

Revelations is a great game, an excellent game. It does nothing new, it’s very formulaic and very similar to Brotherhood and Assassin’s Creed II, and the engine is definitely starting to show its age- but at the end of the day, all that is far outweighed by the pros of the game. An excellent story, memorable characters and great mission structure make Revelations a force to be reckoned with, and the best game in the Assassin’s Creed series, better even than the awesome Assassin’s Creed II.