Gears 5’s Microtransactions Feel Egregious, But Are They Part of a Bigger Plan?

The curious case of monetization and live service ambition in The Coalition's latest.

Gears 5 finds itself in a rather odd quagmire these days. It’s proclaimed as an excellent game, one with a memorable campaign that’s well worth your time and money. Considering you could get it for peanuts on Xbox Game Pass – especially with a killer deal that provided two months of Game Pass Ultimate for just $2 – the deal becomes even sweeter. However, on the opposite end are the numerous problems that have cropped up with the game. The glitches, crashes and infinite loading screens in the campaign. The server troubles that rendered early access moot and prevented anyone from really enjoying online co-op or multiplayer over the launch weekend.

And then there are the microtransactions. 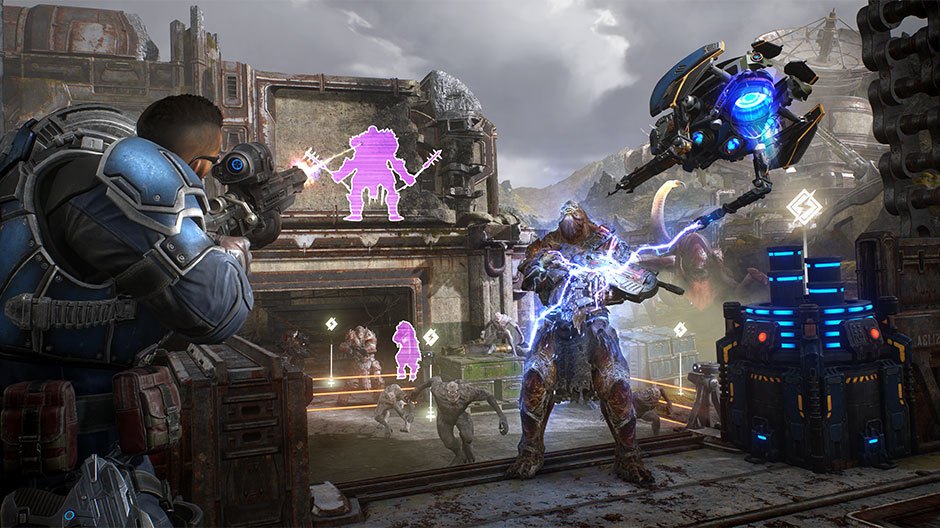 For years now, ever since the debacle with Star Wars Battlefront 2, we’ve heard the slogan “No loot boxes” to help market a game. “It doesn’t have those evil things, we swear!” Gears 5 was one of the many games to hop aboard this train, forgoing the loot boxes and Season Pass of the previous game for more direct purchases and a battle pass-like Tour of Duty system. The Coalition’s multiplayer design director Ryan Cleven even went as far as to state to GamesIndustry.biz that, “We really think we’re ahead of the industry here in getting rid of loot boxes and making sure that we can both service people that are looking to accelerate their progression or earn cosmetics using money but also keeping the integrity of the game experience.”

Unfortunately, the implementation has left some wanting. Yes, you can directly purchase cosmetics in Gears 5 and yes, they’re completely separate from those offered in Tour of Duty. Yes, you could grind out all the cosmetics in Tour of Duty, doing only three challenges per day while simultaneously grinding out the long-term challenges, over the season. However, the “free” rewards have become a joke since the only outfits you get are from the campaign as opposed to anything unique. Yes, you guessed it – to really get something special and “new”, you need to use Iron, the premium currency.

Iron can be earned through the Tour of Duty but even after extensive grinding, you’ll be lucky to have 250 Iron on you. Most cosmetics in the store cost a whopping 1,000 Iron which is close to $10 and there are skin packs which are going for $35. It’d be one thing if the cosmetics were something truly cool or unique but you can get a Thumbs-up emote for $7. Also, have you wondered why the multiplayer roster feels thin compared to previous iterations? Or why characters like Baird and Cole, staples of the multiplayer experience, and very much present in the campaign are missing? That’s likely because The Coalition will sell them separately as new seasons arrive.

In response to the status of certain characters for co-op and multiplayer, the developer responded that, “We know you’re itching to play some of the characters from Campaign and classics from previous Gears games. Just remember that with our focus on gameplay-based characters – each with their own unique playstyle, Ultimates and Skills – we need to develop those features and ensure they are well balanced before they are ready for release.” This is based on the availability of characters for Horde and Escape. Of course, the community isn’t too happy with this response since it conveniently side-steps the argument of making them available for Versus where the skin would be completely cosmetic.

There’s also a completely arbitrary-but-still-important system called Supply that doles out cosmetics based on time spent with the gam. In case all of this wasn’t confusing enough already. You can buy Boosts to speed up XP gain and the Supply drop rate, though the jury is still out on whether the latter actually works.

Many other outlets and players have covered the system in far greater detail but it’s easy to see the outrage behind this. Why does a $60, full price game have such hefty microtransactions? It’s a question that’s plagued many triple-A titles, from Assassin’s Creed Odyssey to Call of Duty: Black Ops 4. Additional revenue for offsetting costs (especially with the lack of paid DLC) and funding updates is a cited reason but it’s easy to see the live service elements that Gears 5 is going for. New seasons, new maps, new characters, new Horde Operations, new modes, more features for the Map Builder – they may be “free” but there’s still very much a price attached.

However, Gears 5 isn’t from a third party publisher like the above mentioned games. It’s the result of a first party studio, developing a new sequel for an IP owned directly by Microsoft. The same Microsoft that leverages revenue from Xbox Live Gold subscriptions, game sales, platform licensing, the list goes on. Oddly enough, it’s the same Microsoft that’s received both criticism for how it handled microtransactions in games like Halo 5: Guardians while simultaneously receiving praise for efforts like Sea of Thieves (the latter being Rare’s work but still). Plus, when you look at other first party titles with multiplayer – like Nintendo’s ARMS, Splatoon 2 or Super Smash Bros. Ultimate – you’ll find other examples of titles with no microtransactions receiving extensive post-launch support (aside from paid DLC). So what gives? 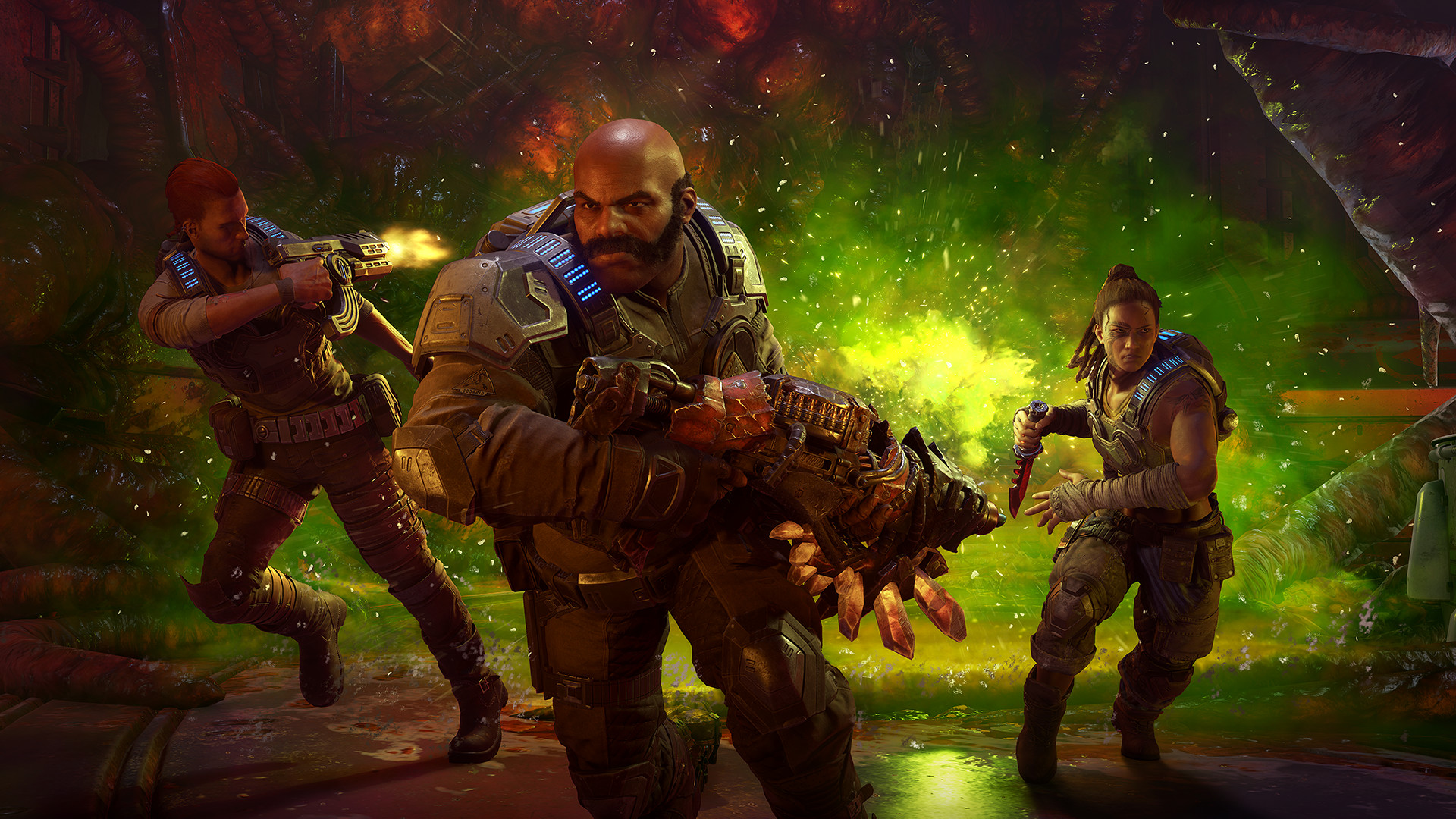 One theory could be that Microsoft is gearing up for the inevitable future of Xbox Game Pass. A service which renders full price purchases obsolete and needs additional revenue from elsewhere to survive. In that respect, if you’re playing on Game Pass but find yourself hooked on the multiplayer, then Gears 5’s microtransactions are a way to get at you. What about those who bought the full price game and expect a product without such hefty microtransactions attached? “It’s just cosmetic” is probably the argument thrown about.

Make no mistake – despite personally having so many issues with Gears 5’s campaign, I think it’s worth paying $60 for. If not that, I feel it’s worth giving a good 12 to 15 hours of your time to play through it via Game Pass (heck, play it twice if you want). The problem is that Gears 5 wasn’t just marketed as a $60 campaign. It was presented as having all these different modes and features, some which face a number of issues but which are very fun overall.

Complaints regarding the cosmetics could be disregarded, if you so wish, by stating that they’re just cosmetic. And that’s fine – different strokes for different folks. But what about those who don’t want these addictive elements in their game? What about those who are used to the way things were and now find themselves on an annoying grind – that too where progress sometimes doesn’t save due to glitches – just to get some bare-bones cosmetics? Is that worth all the free content, which itself is inevitably being used to push even more microtransactions? Does Microsoft even care when it needs to make up its bottom line because putting first party titles on Game Pass is a lot more costly than it initially envisioned?

None of these are easy questions to answer but one thing is for sure: The live service space is crowded enough as is and Gears 5 isn’t doing favors to long-time fans by trying to compete.