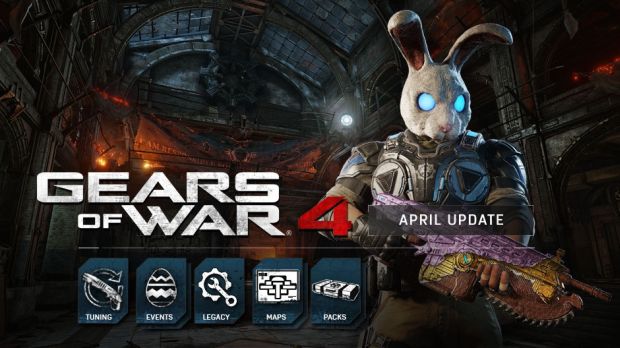 Another update is en route for Gears of War 4’s multiplayer. Microsoft has announced on Xbox Wire that the April update, which lands on April 14th, will feature new maps, a new mode and much more.

The new mode, dubbed Bunny Hint, will see players donning bunny masks. Up for grabs are five chocolate Easter egg skins for weapons. What you have to do in the mode is yet to be revealed but Microsoft will have more information next week. As for the new maps – Hotel and Slab – they’re from Gears of War 3 with updates and refinements for the current game.

Season Pass owners can venture into the Developer Playlist and try these new maps now with double XP and 20 percent Credits boost. April 11th marks the day that these maps will be available for all. There will also be a new COG character added to the Legacy Character line-up and the Kantus coming via Gear Pack. New Horde and Versus events are also scheduled for April 21st and 28th respectively.

If that wasn’t enough, the April update will also contain some weapon changes, serving as a “major’ update for Core and Competitive modes. Stay tuned for more information on the update in the coming weeks.

Tagged With: gears of war 4, the coalition, windows 10, Xbox One