Game Informer has brought forward a ton of new information about the upcoming Gears of War 4 and among that swath of information are a couple of screenshots showing off what the game will look like. If the screenshots are indeed in game, then this game is going to be stunningly good looking and could bring quite a few people over to the Xbox One.

To some degree, this game is going to be a fresh start for the series, since it takes place years after the end of Gears of War 3. The characters that players will be able to take on are entirely new and it appears there are going to be some new enemies as well. The weather itself is going to be an impressive adversary after a massive weapon has changed the way the planet itself behaves. There are going to be some massive storms and it appears at least one of the pictures just released is of one of those storms.

Also included in the screenshots is a closeup of one of the enemies, as well as one of the new heroes of Gears of War 4 taking on an enemy. There is also a really nice looking shot of the backdrop for this particular battle. to some degree, the shots appear to be indicating almost photo-realistic graphics. The shots, as well as the other information made available by Game Informer could get people quite excited, even those who aren’t normally fans of cover shooters. Gears of War 4 doesn’t have an official release date but it’s expected later this year. 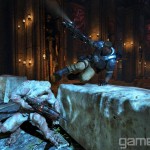 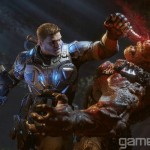 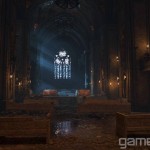 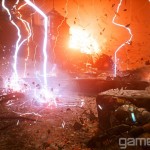