Gears of War 4 Was A Lot Like Star Wars: The Force Awakens, Says Series Creator Cliffy B

‘Maybe the next game can take more risks.’ 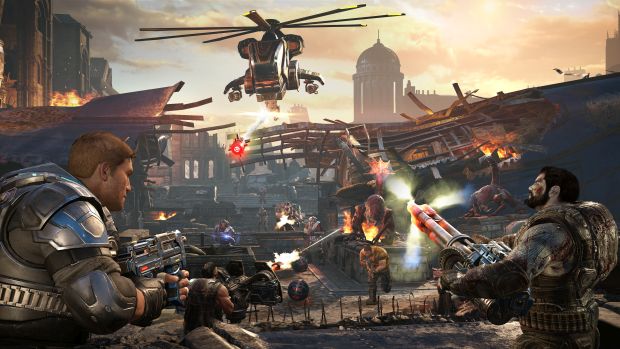 Cliff Bleszinski helmed the Gears of War series during his time at Epic- he’s since broken away and is now working on Lawbreakers, an arena shooter that’s more his own thing. Epic, meanwhile, have gotten out of the traditional AAA gaming business entirely, having sold the Gears of War franchise to Microsoft. Microsoft in turn tasked the studio The Coalition with managing the Gears franchise- and The Coalition turned out Gears of War 4 last year, the first numbered entry in the series since 2011’s seminal gears of War 3 concluded the original trilogy.

The new game was received largely well, but reception was notably more muted than the rave critical acclaim that the original games garnered. A lot of this had to do with the feeling of sameness that pervaded the game. Speaking on that, creator Cliff Bleszinski had his own take, likening Gears of War 4 to Star Wars Episode 7: The Force Awakens, which was a similar belated revival of a beloved franchise.

“What [Gears of War developer and The Coalition boss Rod Fergusson] did was give the people what that want. He did the J.J. Abrams Episode 7,” Bleszinski said to Gamespot, referencing Star Wars: The Force Awakens. “I’ve watched Episode 7 five times. I still get misty-eyed and get all excited but when I think objectively about it, I’m like, ‘There wasn’t a lot of risk there.’ So I’m hoping they take a little bit more risk in the future.”