Sucker Punch's latest is an absolute masterclass in visuals.

When Sucker Punch announced Ghost of Tsushima a few years ago, many outlets assumed that the game, nominally releasing on the PlayStation 4, was in fact a teaser trailer for PlayStation 5 tech.

Two years down the road, Ghost of Tsushima finally released – albeit, months before the PlayStation 5. Somehow, Sucker Punch managed to fit this remarkable technical showcase into a package that runs on ageing 2013-era hardware. In many ways, this is the most remarkable feat of late-gen first party work we’ve seen since Halo 4 redefined what was possible on Xbox 360 back in 2012.

Ghost of Tsushima is built on the same core technology powering inFamous: Second Son. This is fundamentally the same variety of open world Sucker Punch action we’ve seen since the PlayStation 3’s inFamous. However, the change in setting to medieval Japan has necessitated big changes: dense urban environments give way to rich foliage. While NPC counts are pared back somewhat, the increased attention to detail and the seemingly flawless LOD transitions more than make up for this.

Ghost of Tsushima utilises a deferred renderer. While in inFamous: Second Son this allowed for some over-the-top lighting effects during fight sequences, the fully dynamic realtime lighting here is used to create a much greater sense of atmosphere. Blazing fires, lanterns, and other point light sources cast light and shadow. The game makes excellent use of these in stealth sections, where the player flits from shadow to shadow.

In terms of material rendering, the physically based material rendering pipeline introduced in inFamous Second Son makes a return here. Across the board, materials look excellent, from the metallic sheen of black Mongol armour to woodwork and paper. The materials, together with impeccable texture work, really convey a sense of wear and tear in the game’s battle-worn environs. 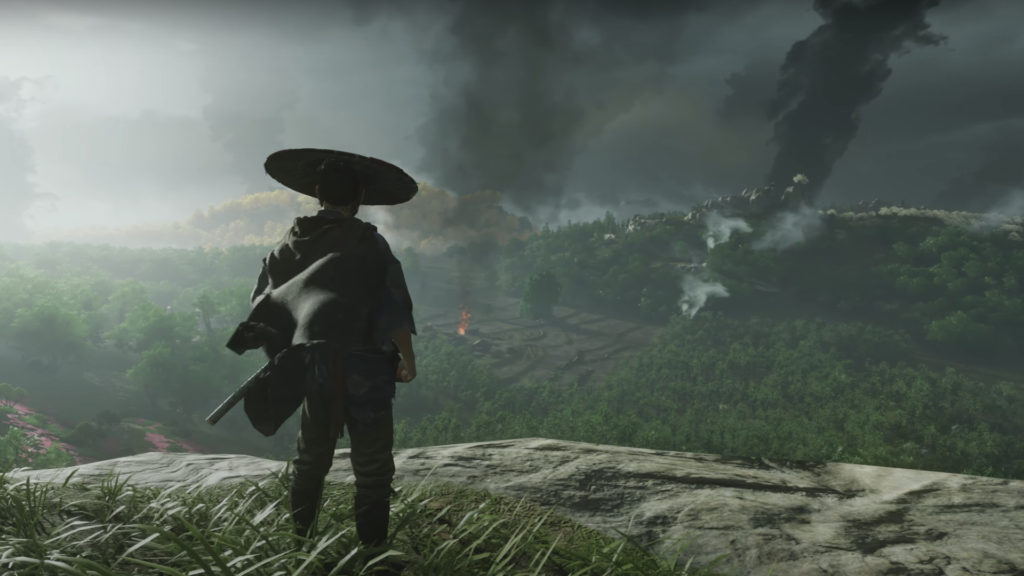 Before we proceed ahead, a note for you. We analysed the game’s performance by taking some sample scenes from the game and running it through trdrop, an open source software. Note that this tool gives us a mere demonstration of the game’s performance, because an exact 1:1 representation of performance can only be provided by the developers themselves since they have access to vast of array of tools and profilers.

The PlayStation 4 outputs a native 1080p and targets 30 FPS. However, intense scenes – especially with a high volume of particle effects – see it drop well under into the high-twenties. This can be a slight annoyance, especially during combat.

The PlayStation 4 Pro offers two modes which are higher resolution mode and better frame rate mode. The former opts for a conservative 1800p checkerboard output. This looks better than 1080p, of course, and together how the excellent AA, holds up reasonably well on a 4K panel. However, other titles like Horizon: Zero Dawn deliver noticeably better image quality. Moreover, PlayStation 4 Pro performance isn’t quite where it could have been – at 1800p, we see a few drops below 30 FPS. 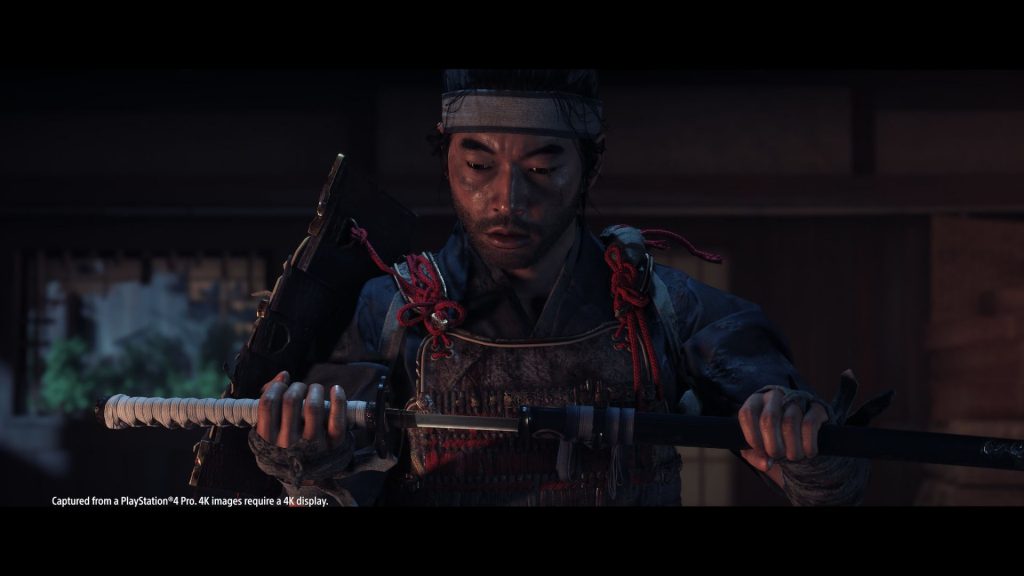 Sucker Punch has always delivered industry-leading character rendering quality, right from the first InFamous. Second Son, the PlayStation 4 outing of the series delivered characters with polygon counts in excess of 60,000 – the most detailed characters in the industry outside of Naughty Dog’s domain. With Ghost of Tsushima, we see an iterative improvement to an excellent pedigree of character work. Jin Sakai – the main character – is lavishly rendered. Individual plates of his lamellar armour show up as real geometry.

Together with high quality textures and material rendering, the armour itself – and armour and clothing on other key characters in cutscenes – looks photorealistic. Facial rendering tech is an iterative upgrade to the work in inFamous Second Son. The large polygon budget really helps here with being able to capture fine nuances of emotion. Many cutscenes in the game default to an over-the-shoulder camera view a la Fallout 4. While this is disappointing, the quality of facial animation tech makes up for it – those close ups of NPC faces look great and subsurface scattering works to realistically highlight light transport through skin.

While we aren’t quite out of the uncanny valley – and while titles like The Last of Us 2 go a step further in terms of sheer character rendering fidelity, this is excellent work as far as an eighth-gen game is concerned. As an aside, characters look noticeably more detailed than those in Assassin’s Creed: Valhalla, an actual ninth-gen title. 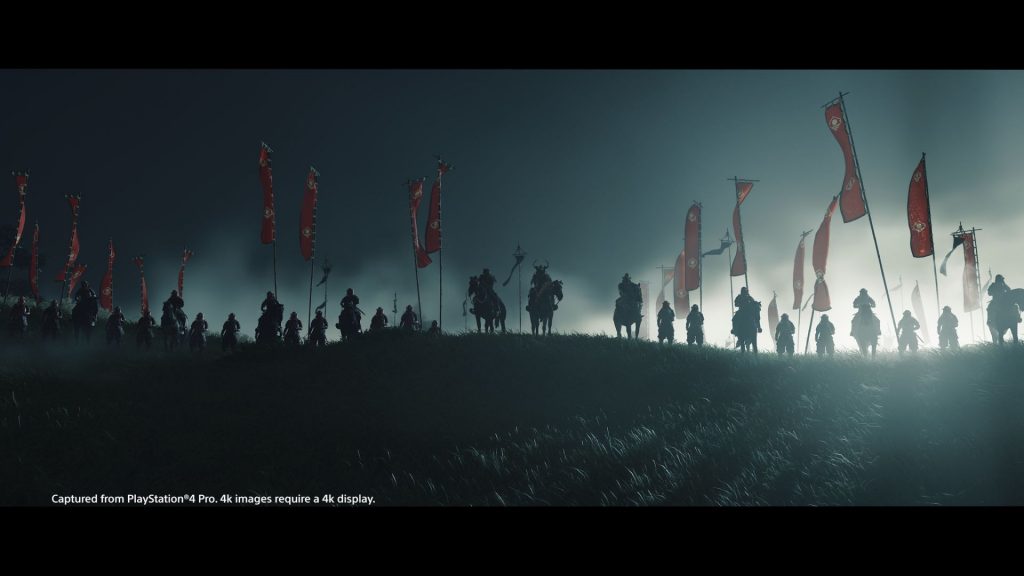 Particles and transparency effects are a strong suit for Sucker Punch’s engine. The particle rendering model was built around the need to accommodate those explosions and electrical effects. As a game set in medieval Japan, there aren’t exactly that many use cases where huge, over-the-top particle effects make sense. However, Sucker Punch has adapted its tech to closely fit with the new environment. GPU accelerated particles make a comeback here. But instead of large-scale explosions, players are treated to literal clouds of leaves and debris whirling through the environment. Leaves and debris move around as your character moves through the environment, adding a much-needed element of dynamism, even in low-key stealth sections.

The particle effects pair well with a best-in-class weather system. Volumetric cloud rendering and a dynamic wind system – affecting the direction of foliage movement – pair with the high LODs and excellent environmental rendering quality to make even the most desolate in-game scenes dynamic. In some ways, this is the inverse of the approach in Second Son: while NPCs and urban environments have been taken out of the picture, Sucker Punch adds vibrancy and dynamism to nature. Volumetric particle volumes are also deployed to good effect – the sun and other light sources illuminate clouds of dust and ash to create an ever present haze in certain areas – adding layers of atmosphere. 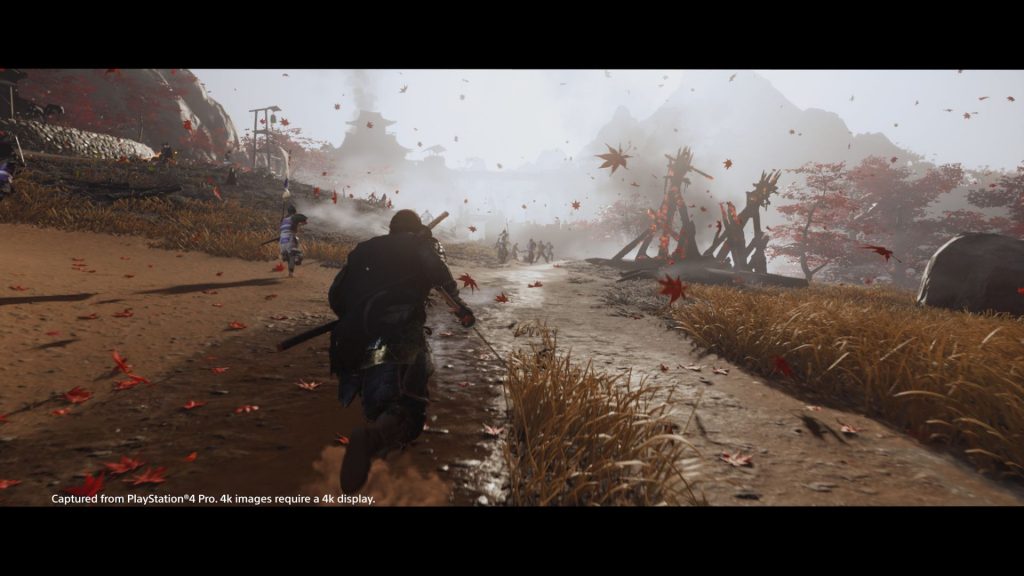 Ghost of Tsushima builds on the excellent anti-aliasing solution we saw earlier in inFamous Second Son. Essentially, we’re looking at something akin to the post-process AA + TAA solution many recent games have implemented, but without a significant hit to image sharpness. Transparencies and model edges receive excellent coverage across the board and this is managed without the annoying Vaseline smear effect a number of games introduce.

At times, the temporal component of the anti-aliasing solution chokes – this is noticeable in scenes with fast-moving objects where you’ll see a bit of ghosting and a loss of sharpness around the edges. However, by and large, anti-aliasing is excellent here. This is all the more important since Ghost of Tsushima’s vast fields – showcased early on – would’ve exhibited an unbearable amount of shimmering without TAA.

All in all, Ghost of Tsushima is a remarkable technological achievement and a swan song for the PlayStation 4 in almost the same way as The Last of Us 2. Combining vast open-world environments with attention to fine detail and a remarkable particle rendering system, Ghost of Tsushima reminds us of just what the PlayStation 4 can accomplish when first-party studios work with mature tech. It also offers us a glimpse of what Sucker Punch has in mind for the ninth-gen.