God of War: Ragnarok – 10 Biggest New Details You Should Know About

Sony has finally lifted the lid on God of War: Ragnarok, revealing several new details- here's everything you need to know.

At long last, Sony has formally unveiled God of War: Ragnarok – and yes, that is indeed it’s official name – and they’ve done so in pretty comprehensive fashion. On top of showing quite a bit of gameplay footage and dropping new story details, Sony also revealed plenty of other new information in a PlayStation Blog update and a post-show interview with the game’s developers following the PlayStation Showcase. As such, we’ve learned quite a bit about God of War: Ragnarok recently, and here, we’ll be going over the ten biggest pieces of info that you should know about. 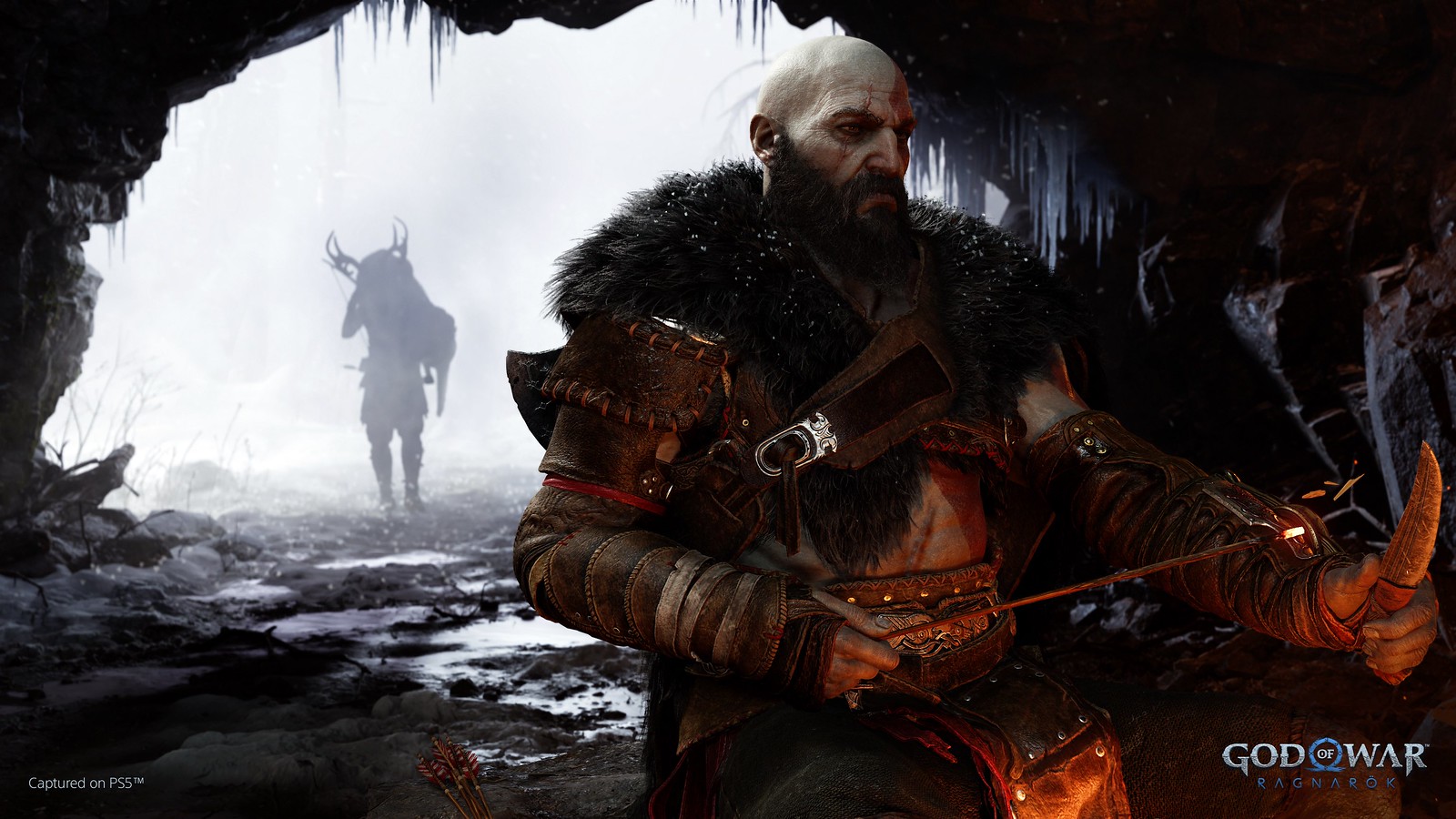 Cory Barlog had a huge part to play in the massively successful reinvention of God of War, and to date, remains the only person to have directed to games in the series. It seems, however, that his third isn’t coming just yet. Barlog is being replaced as director by Eric Williams, who’s been at SIE Santa Monica Studio since 2004, and has served various roles as designer on every mainline game in the series. We don’t yet know how involved Barlog is in Ragnarok’s development, if at all, and in the aforementioned post-show interview, he remained tight-lipped about what he’s currently working on. 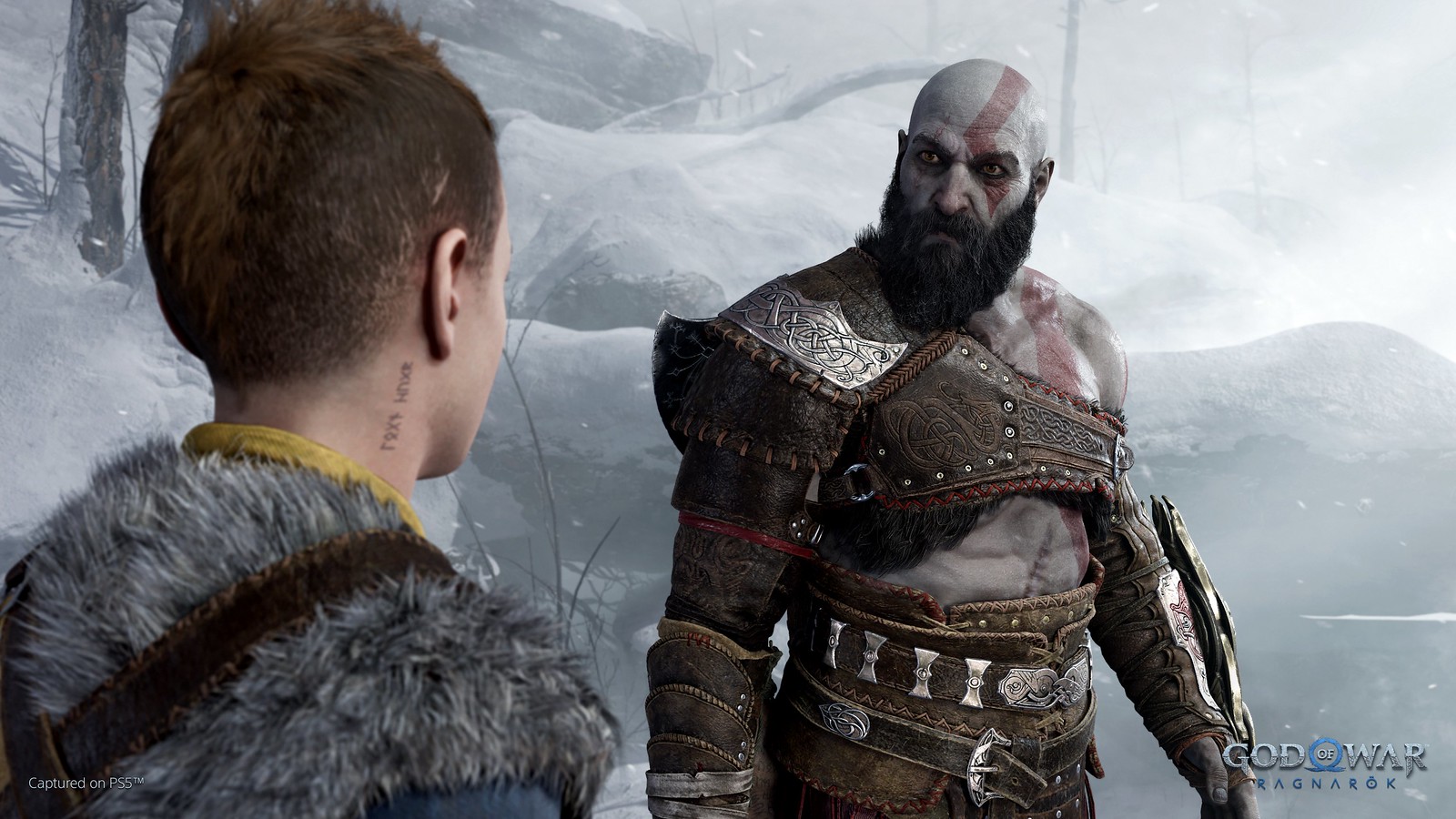 God of War: Ragnarok is set a few years after the events of the first game- which is evident in Atreus’ voice. He’s clearly grown quite a bit. Fimbulwinter has come to Midgard, completely freezing everything over, but Kratos, Atreus, and Mimir have been surviving together in the harsh cold for a while. But of course, once Fimbulwinter ends, Ragnarok will come, and there, Kratos and Atreus have differing views on how to deal with the impending situation. Atreus refuses to sit idly by while the world is consumed by Ragnarok and wants to learn more about his identity as Loki, while Kratos only wants to protect his son. Director Eric Williams says that Ragnarok will tell “a very heartfelt and epic story”, and while Kratos and Atreus’ strained relationship and how it evolves will continue to be pivotal to the narrative, we’ll also see the large-scale impacts of their efforts to prevent Ragnarok. 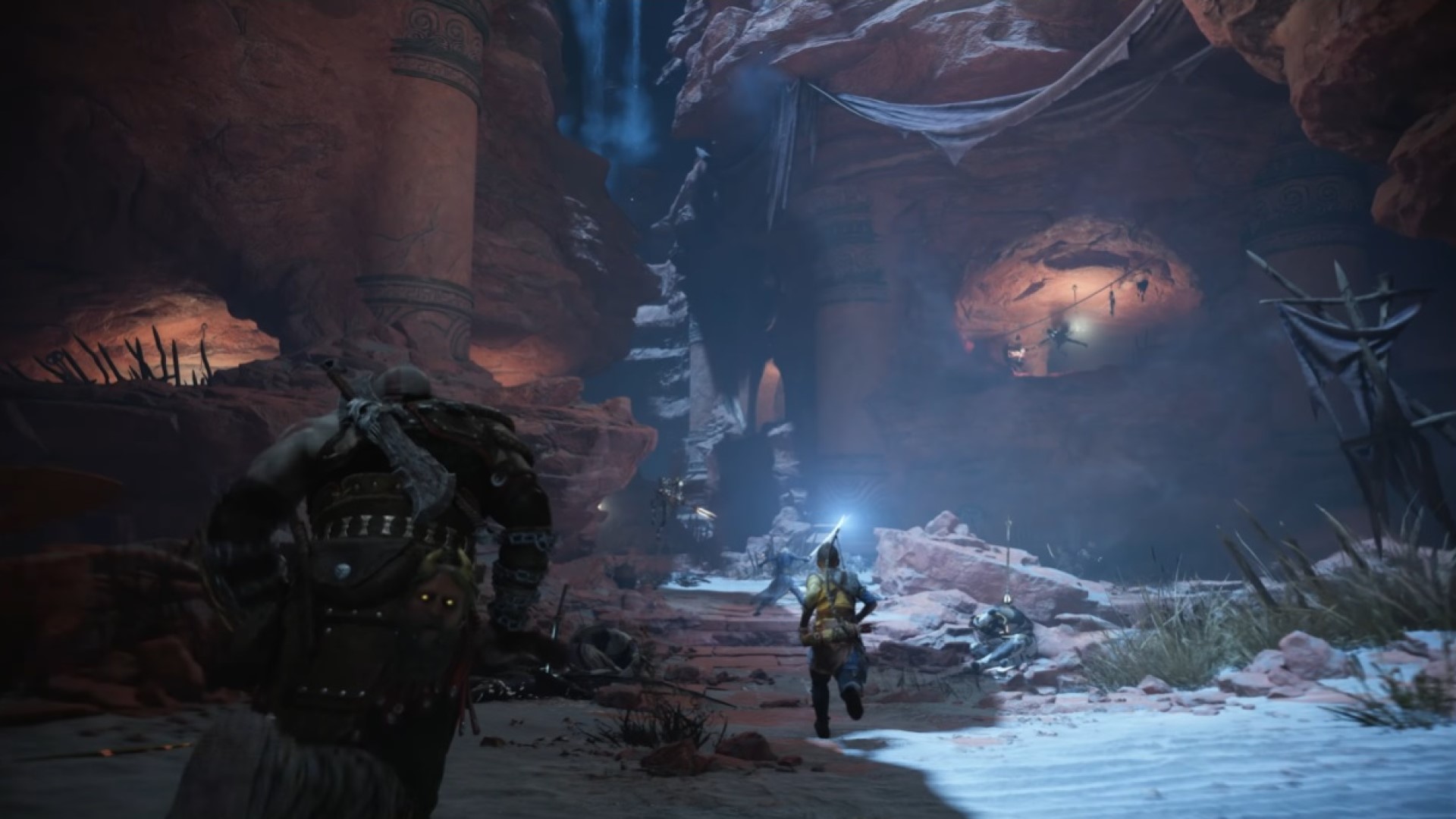 This one sort of caught us by surprise. You would have thought that God of War’s Norse saga would be a trilogy, but it turns out that Santa Monica Studio is wrapping it up in just two games. God of War: Ragnarok being billed as a conclusion to the series’ Norse saga, which, of course, does make sense when you think about it- after all, where do you go after Ragnarok, right? PlayStation Studios head Hermen Hulst says that Santa Monica Studios has “prepared quite a few twists and turns for players” in the finale of the Norse saga. Meanwhile, Williams says: “You can’t call the game God of War: Ragnarok and not have Ragnarok happen in the game. It’s gonna happen. We’re gonna cap off the Norse series with it.” 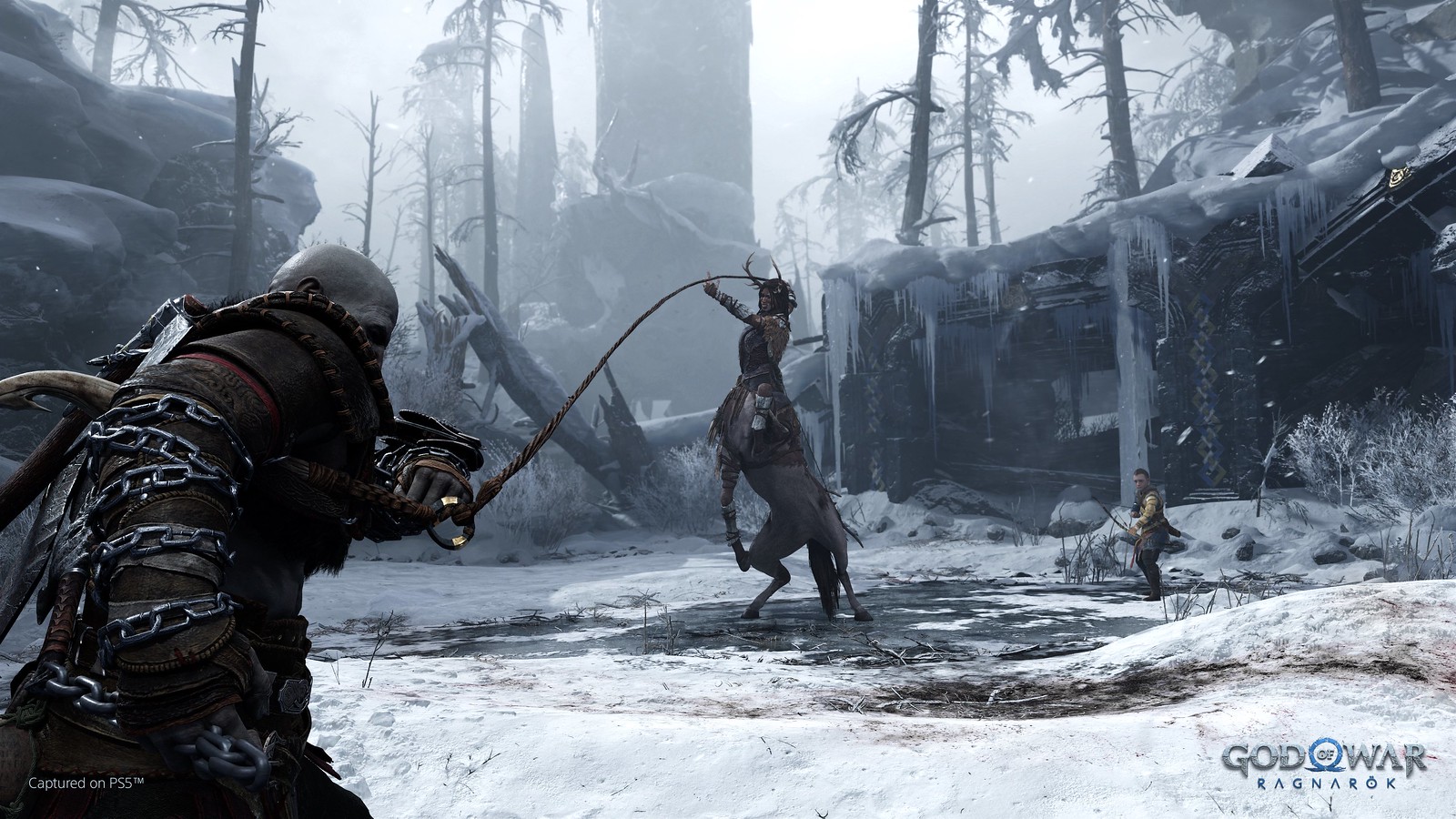 We’ve also learned quite a bit about some of the characters who’ll serve as the main players in God of War: Ragnarok’s story. In terms of returning characters, Kratos and Atreus are, of course, coming back, as is Mimir. In the trailer, we also saw Dwarven brothers Brok and Sindri, who, interestingly enough, seem to be in the company of a new character who has a squid on his arm. And of course, Freya is also returning, to no one’s surprise. Plenty of new characters have also been revealed, including Tyr, the old Norse God of War who was thought to be dead; Odin, the King of Asgard and the Aesir; his son Thor, the God of Thunder; and Angarboda, one of the last remaining Giants. There’s more to talk about with some of these characters though, so let’s get to that. 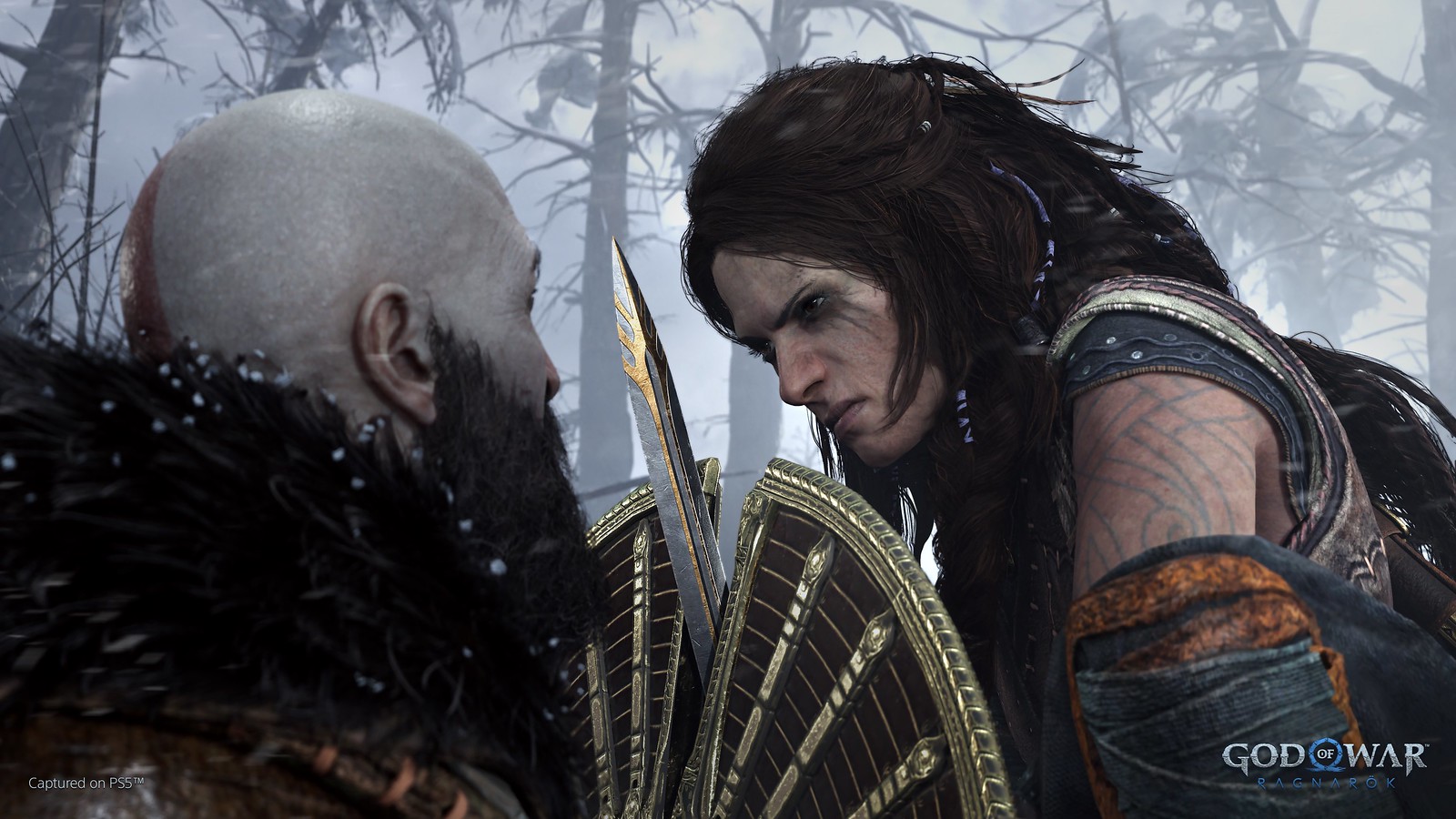 Given how God of War (2018) ended, there was absolutely no way that Freya wasn’t going to be a crucial part of the sequel’s story, and she is, of course, going to have a big role to play in Ragnarok. In fact, according to Santa Monica Studio, she’s going to be one of the game’s two primary antagonists. She’s sword vengeance against Kratos following the dead of Baldur, and, according to the developer, “will turn every weapon at her disposal towards her son’s killer.” The developer says: “We wanted to remind players that Freya isn’t just a terrifyingly powerful user of Vanir magic, but also that she’s a formidable warrior in her own right.” 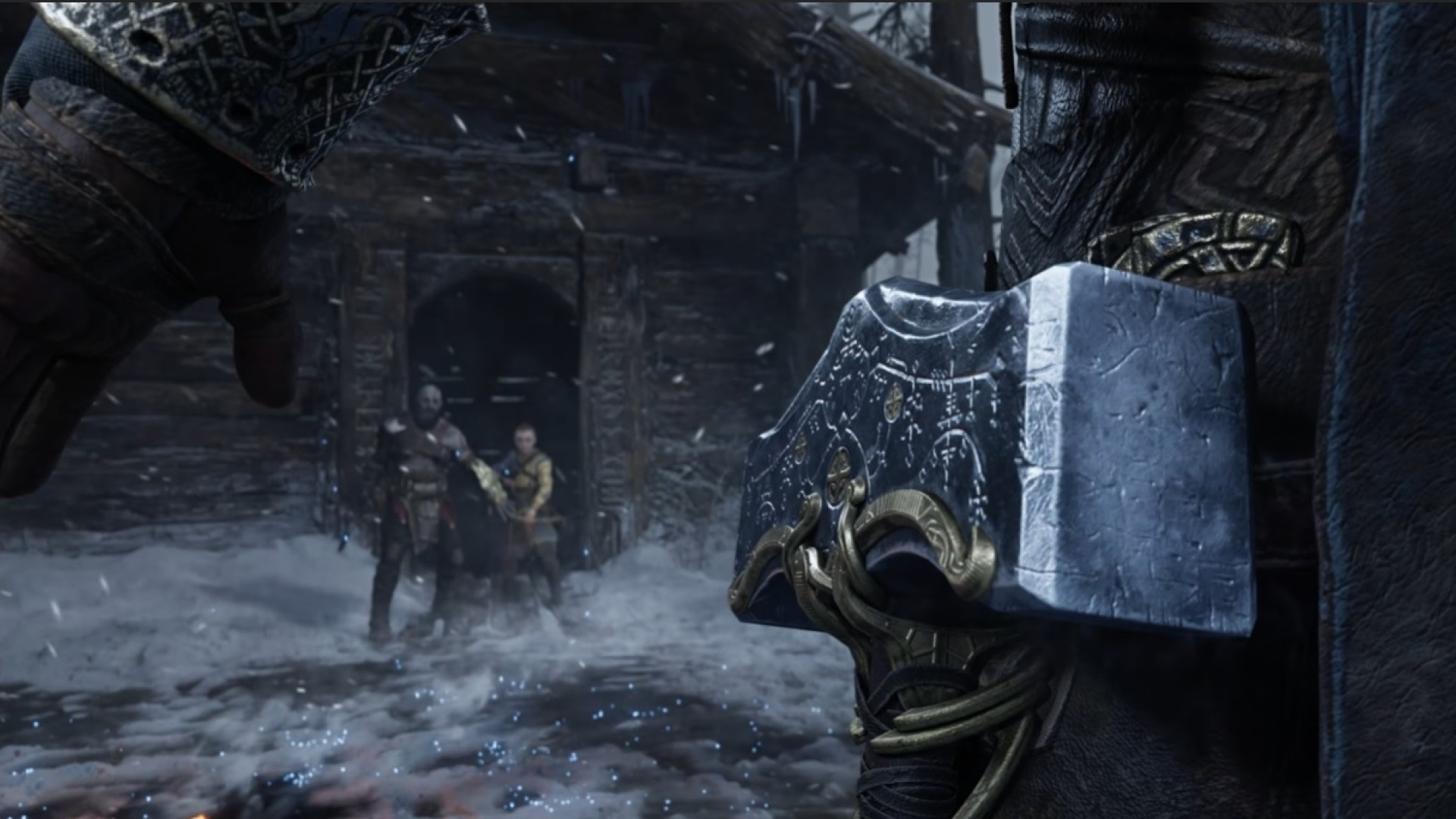 Just like with Freya, it’s been pretty much guaranteed thanks to the hidden post-game scene in God of War (2018) that Thor is going to be looming large in God of War: Ragnarok, and the developer has indeed confirmed that he and Freya will be the main antagonists. Seeing as Kratos killed Thor’s sons and his half-brother, he has his own scores to settle with him. Williams revealed in the post-show interview that Thor is being played by Ryan Hurst, and says that Ragnarok’s take on the character will be much closer to the Norse mythology version. He describes Thor as “a big, burly, hedonistic man-child, red-haired, left-handed, just a little off-kilter than the Thor that a lot of people know right now.”

Of course, Thor is not the top rung in the ladder of Asgard’s hierarchy- given the fact that God of War: Ragnarok is about, well, Ragnarok, Odin is obviously going to be in the game as well. He’ll be played by Richard Schiff, and according to Williams, will play a big role in the story. Talking about the character and his role in the game, Williams said, “It’s a very different take, again, much like Thor. He’s like an old man who’s just kinda busy with his own things and doing whatever he wants. He doesn’t live in a castle or anything like that.” 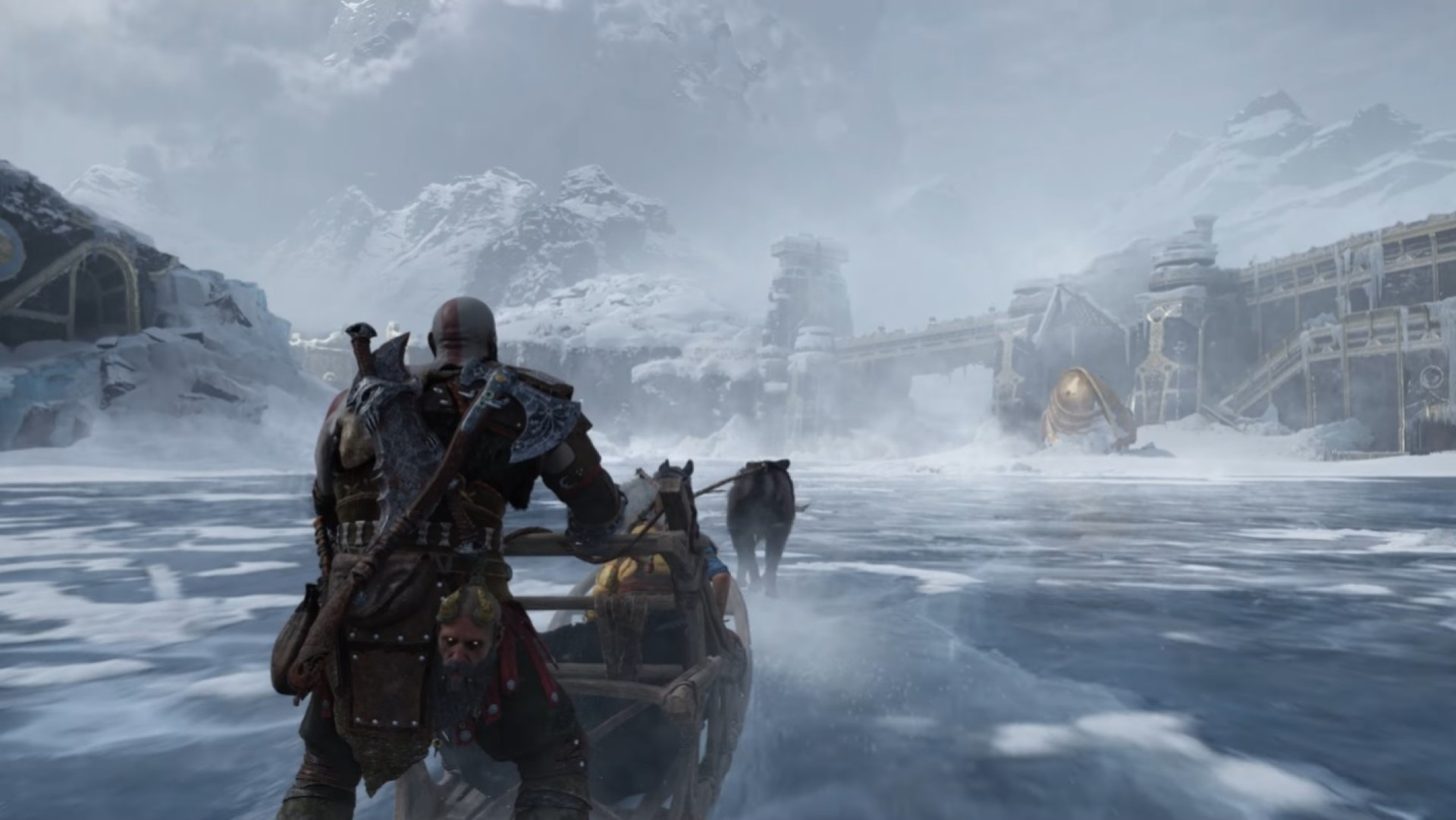 God of War: Ragnarok’s reveal trailer had quite a few glimpses of new mechanics, and it seems traversal in particular will see some additions. The boat will return, of course, but at one point, we also see Kratos on a sled being pulled by wolves. Interestingly enough, it seems like he’s sledding on a completely frozen Lake of Nine- which makes sense. It’s Fimbulwinter after all. Another scene in the trailer also shows Kratos throwing the Blades of Chaos into a ledge and the pulling himself up to it, so it seems like the Blades might also serve the purpose of a hookshot. 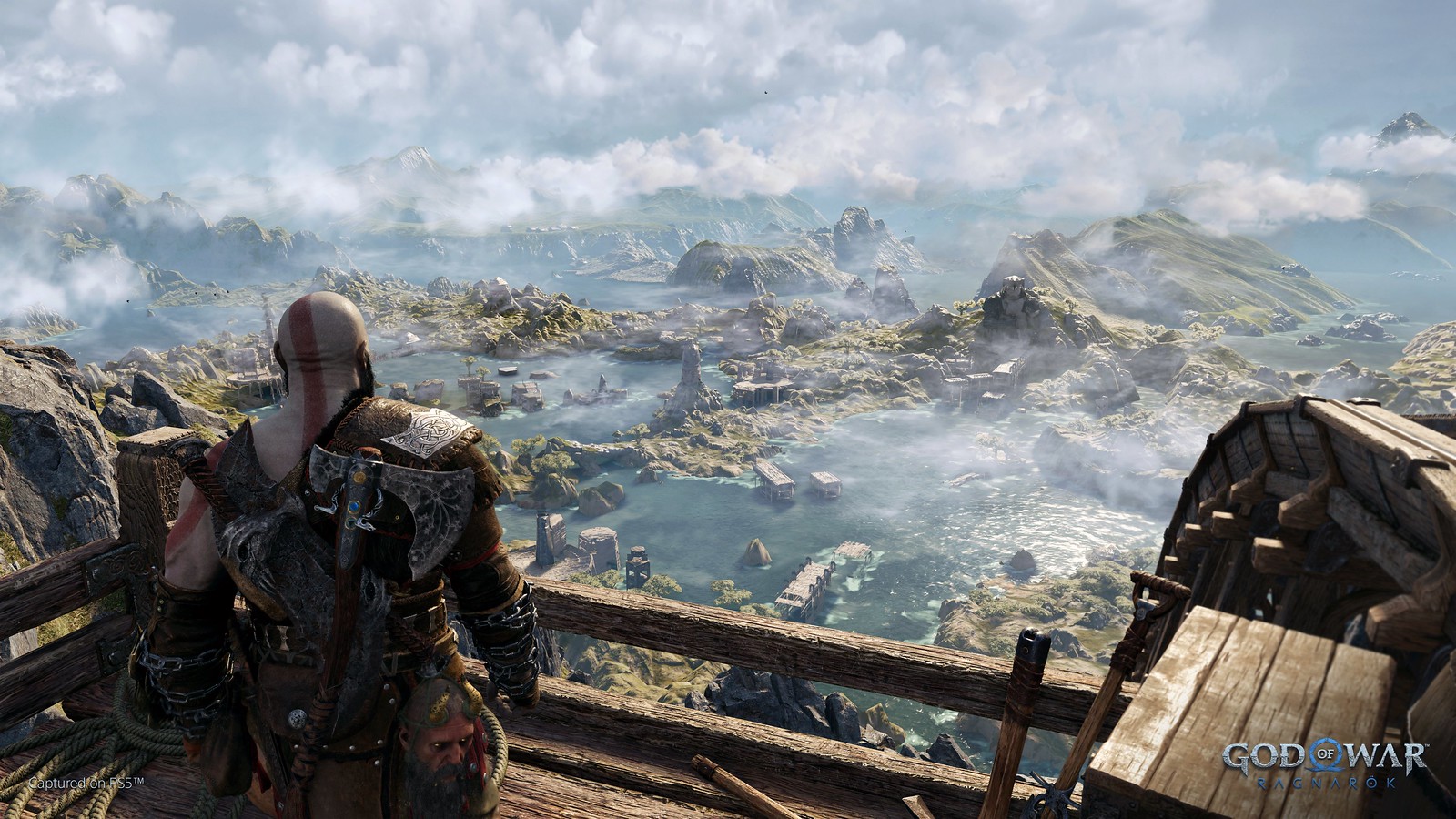 Given God of War: Ragnarok’s very premise, it goes without saying that it’ll be leaving no stones unturned when it comes to scale, and it seems that’ll apply to new locations in the game as well. While God of War (2018) allowed players to go to six of the Nine Realms, God of War: Ragnarok will let players go to all nine of them, which means Vanaheim, Svartalfheim, and Asgard are being added as new locations in the game. Meanwhile, old locations and realms are, of course, also returning, but they will also feature completely new areas.

Interestingly enough, it seems variety is going to be quite a focus in Ragnarok’s world design. On the PlayStation Blog, Santa Monica Studio’s senior community manager Grace Orlady wrote: “Exploring the realms will take you everywhere from verdant, otherworldly jungles to intricate subterranean mining networks. This next installment in the series will bring you a more diverse, beautiful, and mysterious variety of locations than in any other God of War game.” 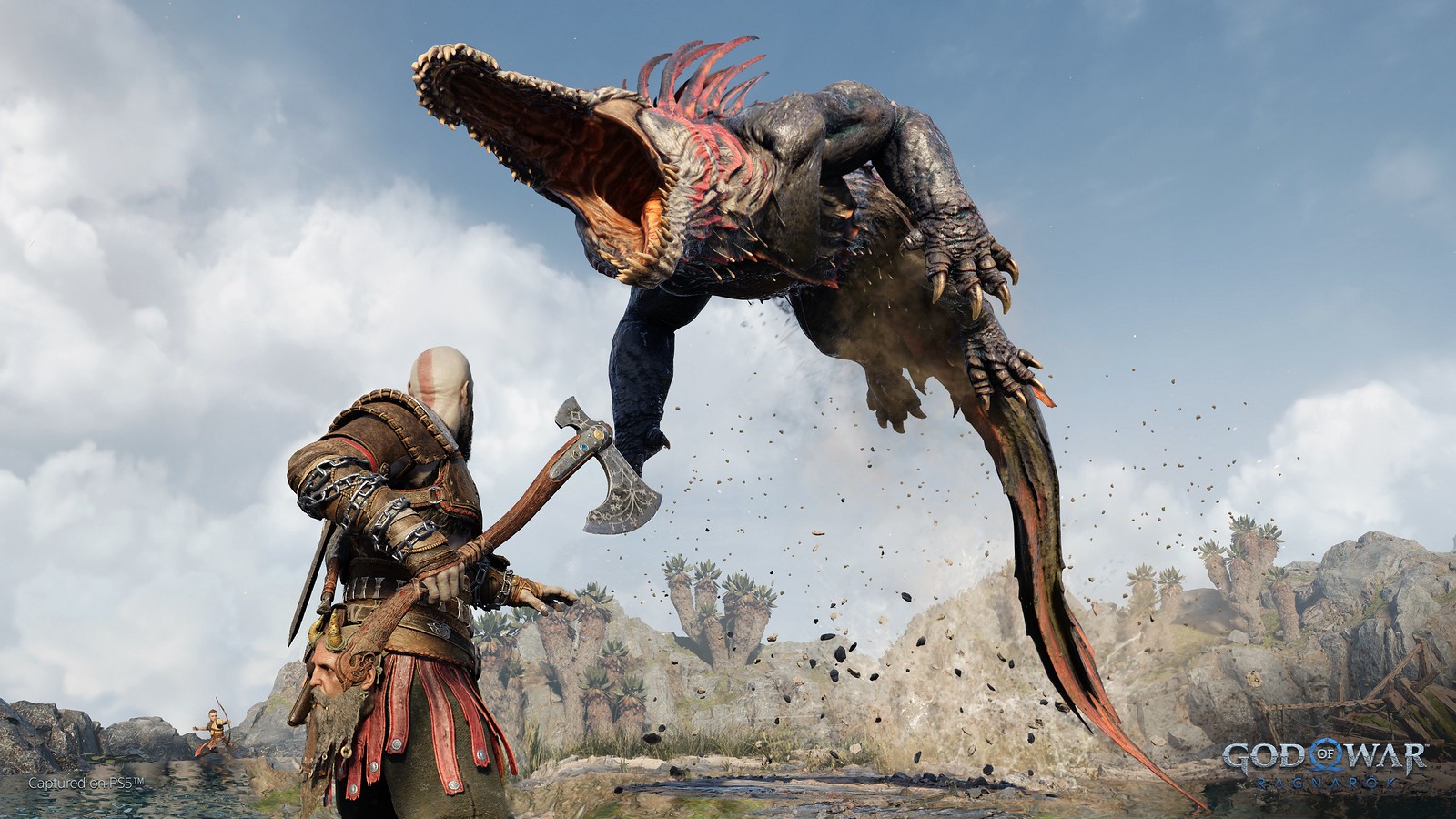 Of course, we can’t talk about God of War and not discuss the combat. The 2018 game pretty much nailed its mechanics in the combat department, but as you’d expect, Santa Monica Studio is looking to turn things up a notch in the sequel. There will be new abilities, new Runic summons, and more, while several new enemy types are also being introduced. We even saw some of these in the trailer, such as the giant lizard-like creature leaping at Kratos, known as a Dreki, or the centuar-like creatures called Stalkers. What’s most interesting, though, is that God of War: Ragnarok’s combat is going to put quite a bit of emphasis on player choice. Orlady wrote in the aforementioned PlayStation Blog update: “With God of War Ragnarök, one of our main goals was to push player choice in combat. Whether it’s through hard hitting combos, a mastery of elements, or clever defensive tactics – you will find plenty of opportunity to fight alongside our duo in a way that feels uniquely expressive.”