NOTE: There are spoilers ahead for God of War Ragnarok.

Before God of War Ragnarok launched, many of us had an idea in our heads of how its story would go, and how it would conclude the series’ Norse saga. As is often the case with hugely popular story-driven franchises, theories were a dime a dozen about more than a few unresolved plot threads. Sure enough, some of those theories turned out to be accurate- but it’s fair to say that in some of its biggest and most pivotal moments, God of War Ragnarok defies expectations. From beginning to end, its plot keeps finding ways to unfold in ways that we don’t see coming, and introduces several major elements that define the narrative’s flow in fundamental ways.

The biggest and most prominent of those elements is, without a shadow of doubt, the mysterious mask. About halfway through the game, one of Atreus’ playable sections sees him traveling to Asgard, where he hopes to put up a ruse of friendship with Odin while attempting to find a way to defy the predicted death of his father. When he arrives in Odin’s keep, the Allfather takes him in with open arms, even knowing that Atreus (or Loki, as he and the other Aesir call him) intends to betray him. He does that because he’s so thoroughly confident that once he shows Atreus what he has to show, the young half-Giant will willingly begin working with him.

And what he shows him is a strange rift, one that appeared in this place a long, long time ago, and above which Odin went on to build his keep and his kingdom after he first found it. The rift is a essentially a tear in reality, giving of a green hue and emanating a strange light, and Odin tells Atreus that looking into that rift will grant infinite knowledge and provide all the answers to every conceivable question about existence, about their purpose- about everything imaginable. To someone as obsessed with having knowledge of everything as Odin is, you can imagine how that is an alluring prospect.

Actually looking into the rift, however, is easier said than done- Odin tried to do it once, and he lost one of his eyes in the process. The only way to look inside and actually be able to understand what one is seeing and coming back intact is to look through an ancient mask that’s just as mysterious as the rift itself, one that’s broken in three pieces, that Atreus spends the rest of the game reassembling. And both the mask and the rift are massive question marks, because even by the time the game comes to an end, every question we had about them when they were first introduced remains unanswered.

The biggest and most obvious question is- what the hell even are they? Everything else in God of War Ragnarok is obviously inspired by the proses of Norse mythologies, but nowhere in the eddas is there any mention of a mask. Sure, the titular mask in the Jim Carrey-starring 1994 movie The Mask is said to be the mask of Loki in the film, but I think it’s safe to say that there’s no connection here, other than maybe a cheeky easter egg. But while the appearance of the mask might be an easter egg, its nature and existence are far too pivotal to the story to be that- so what the hell is it? Where did it and the rift come from?

By the time God of War Ragnarok’s story comes to an end, the mask and the rift are both gone. Rather than being lured by Odin into putting it on, Atreus breaks it into two pieces, at which point both pieces fly into the rift, and the rift closes behind it. And even if the rift hadn’t closed, Asgard has been well and truly destroyed, so there’s no way of being able to find it again. And yet, even so, we have a strong feeling that both the mask and the rift are going to be crucial plot elements for the God of War franchise as it moves forward into its next era. 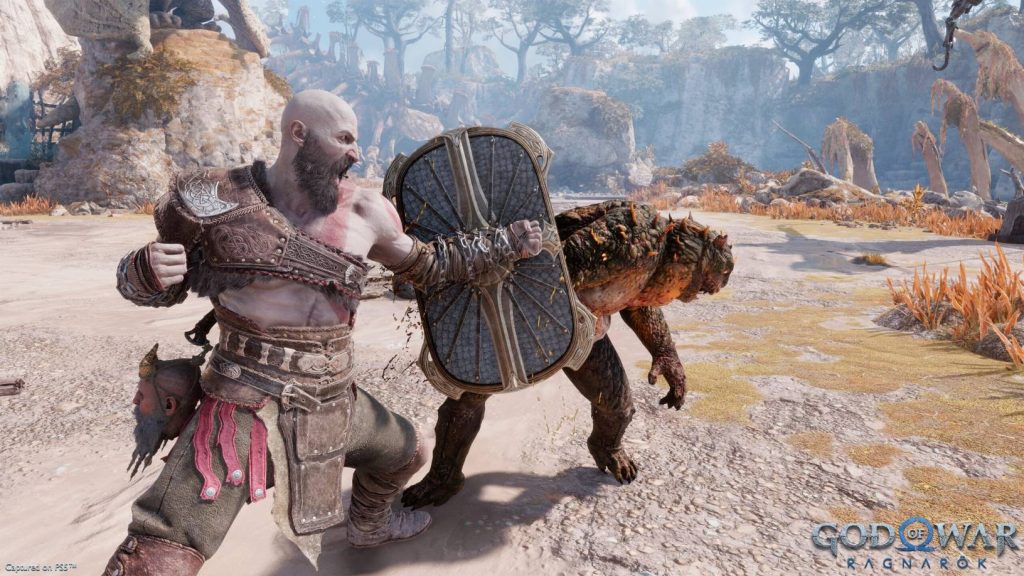 More than once, Odin refers to the rift as a tear in reality and a gateway to other realms and planes- could it be, perhaps, that the rift is how the series will travel to its next mythological setting? Say, Egypt? We think that’s quite likely- and it may even be intrinsically tied to Atreus’ story, and the journey he goes on at the end of the game. Odin tells Atreus that he, as the Champion of Jotnar, is the only one who can put on the mask and look inside the rift, which would also explain the strange attunement it has to the object, which no one else seems to have. Meanwhile, at the very end of the game, Atreus tells Kratos that he has to leave find other Giants who’re out there, and he has a pretty good idea of where to start looking.

Is it possible, then, that those other Giants – the ones who didn’t whisper their souls into marbles and are out hiding in the world out there – are in God of War’s next mythological setting? Maybe they’ve find refuge from Odin in Egypt? Maybe Atreus has a hint of where they could be because of his attunement to the mask, and maybe his journey will also bring the resolution of the purpose of the mask and the rift, and maybe that will be how the series connects its Nose saga with whatever the next one might be.

Interestingly enough, game director Eric Williams recently told Kinda Funny in a spoilercast that while he had plenty of creative control over God of War Ragnarok’s story, he was told by Santa Monic Studio creative director Cory Barlog to ensure that three things happened in the game, one of which was Atreus leaving at the end and going off on his own. Of course, that could be for any number of reasons, but maybe it’s because a story revolving around him is how the series will transition into its next phase. It certainly fits- Atreus’ story, the mask, and the rift are all some of the biggest lingering mysteries that still exist after God of War Ragnarok’s ending. A game with Atreus as the protagonist that brings those loose ends together and ties them all together while simultaneously laying down the foundation for the franchise’s next arc may very well be the dream scenario.

While there’s no shortage of things related to the mask in God of War Ragnarok that remain unclear, what’s unequivocally clear is that it’s going to be central to the series’ larger story. Now, there is a very real possibility that we turn out to be wrong and neither the mask nor the rift are ever mentioned in future God of War games ever again- but that would seriously surprise (and disappoint) us.