As the first ever game to be officially confirmed for the PS5, Godfall has been something that many have had their eye on for nearly a year now. Its self-dubbed looter-slasher premise, high fantasy setting, and melee-focused combat has looked intriguing in all that we’ve seen of the game so far, and Counterplay Games will be hoping that their first AAA game lives up to the hype they have been drumming up for it.

Recently, we got a chance to send across a few of our questions about the game to its developer to get a better idea of what players can expect from it when it launches not long from now. You can read our interview with senior technical producer Dick Heyne below.

"With Godfall being a new IP, we couldn’t take anything for granted when it came to world building and storytelling. The world of Aperion is completely new to players. If narrative and storytelling didn’t play a central role in development, we knew we’d run the risk of creating a world that felt hollow."

Godfall sees a pretty significant leap from Counterplay Games’ previous title, Duelyst, as a full-blown AAA action-RPG. How was the processing of transitioning between two very different productions?

It was for sure challenging, but a very rewarding experience. I remember the early days of Godfall, three or four years ago, when we were a much smaller operation. Half the team worked out of a humble little office, the other half were scattered across the world. Our team size was roughly around 15 to 20.

The team was very eager to try something new and embraced the challenge from day one.

We tried to set ourselves up to be ready to scale up when the time came. This was probably our greatest production challenge. Godfall is just significantly more complex than what we’ve worked on in the past. We spent a lot of time making sure we were focusing our energy on features and initiatives that actually resulted in a more positive experience for the player.

While the transition was a significant one, the entire team really rose to the occasion and pulled off what a lot of outsiders told us was impossible.

Narrative and storytelling don’t usually take centre stage in loot-driven RPGs- what is Godfall’s approach to this?

With Godfall being a new IP, we couldn’t take anything for granted when it came to world building and storytelling. The world of Aperion is completely new to players. If narrative and storytelling didn’t play a central role in development, we knew we’d run the risk of creating a world that felt hollow.

We didn’t feel as though this would result in a meaningful looting experience. Who cares if you look like a badass if you aren’t invested in your character or the world they exist in?

Beyond the campaign, we wanted to make sure there was a rich world that players could continue to sink their teeth into even after they defeat Macros and the credits roll. We worked hard to create an expansive codex filled with rich pieces of Aperion’s history, enemy intel, and other tidbits of lore.

Since Valorian knights express themselves through combat, we also made sure that every weapon had its own story/ lore attached to it.

All of these pieces tied together create a one-of-a-kind universe, and we can’t wait to watch players explore and uncover the mysterious history of Aperion. 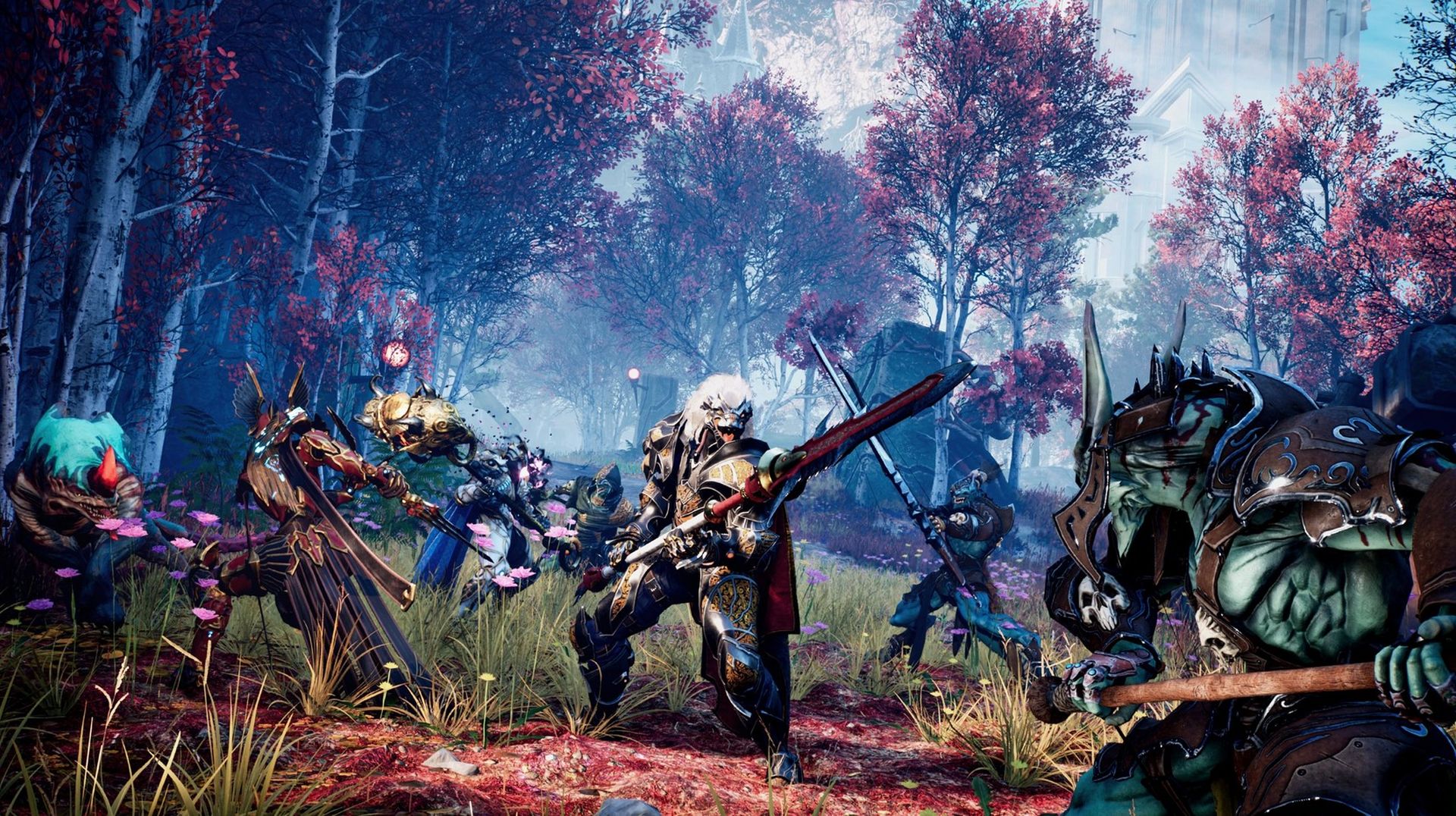 "My hope is that our players will feel their way is the ideal way to play Godfall, and they have absolute agency to decide what their way is."

Godfall does allow players to play through it solo, but given how important co-op seems to be, would you say that’s the ideal way of playing the game?

I’m hesitant to say “ideal” because I think that discourages players who might want to play solo. I think the ideal way to play Godfall is whatever the player finds the most fun.

Personally, I love playing co-op. I find that my clears are a bit faster and it is always a blast theory crafting synergies with whomever I’m playing with. We’ll look at each other’s builds, try to identify any gaps we might have, and tune/ tinker until we feel like we have everything we need to dominate the battlefield.

That said, sometimes I want to move through a mission/ level at my own pace. Solo is great for that.

My hope is that our players will feel their way is the ideal way to play Godfall, and they have absolute agency to decide what their way is.

Godfall is, of course, an RPG, and one that focuses is on loot-driven progression, which in turn means that players will have certain expectations from the game, in terms of, say, how all pieces of gear look, or what utility they will have. Can you tell us about what players should expect to see from Godfall in that area?

Sure. Godfall has over 120 weapons. Beyond that, you have a plethora of augments, trinkets, banners, and lifestones that will ultimately all play a crucial role in the build you land on.

Players can expect a lot of visual variety between our weapons. We really wanted to cover a wide range of looks and feels to ensure that no matter what the player’s preference was, they would find weapons that visually resonated with them.

Similarly, the utility provided by your loot is incredibly varied. The central idea is that loot can enhance the tools the player has (Soulshatter, Breach Damage, etc.). But some loot can also add tools to the player arsenal. Some gear will mark enemies with various debuffs, including the Mark of Lifetap which will heal any allies who attack that marked enemy. The player can also enhance themselves with unique blessings with certain pieces of loot, providing them temporary buffs in the heat of combat.

We don’t want to completely lift the veil, but needless to say, Godfall’s loot is a robust playground filled with possibility.

Godfall has what looks to be a very rich high fantasy setting. What can players expect from the game in terms of things such as lore and world-building?

I mostly covered this above. Players can expect a rich world with diverse environments as they ascended the Skybreaker Monolith.

Players can also look forward to our rich cast of characters. With over 70 unique enemies, Macros has plenty of pawns at his disposal.

"Players can expect a lot of visual variety between our weapons. We really wanted to cover a wide range of looks and feels to ensure that no matter what the player’s preference was, they would find weapons that visually resonated with them."

What are your plans for Godfall’s post-launch support? Is that something you’ve planned for at this stage?

It is something we have for sure planned for, the Ascended Edition of Godfall comes with the first expansion of the game.

Planning for the future of a new IP is interesting because of course you have to have a game plan. But we also want to stay vigilant and make sure that our future efforts are reactive to community/ player feedback.

I’m personally very excited for Dreamstone mode. This is one of the endgame loops we’ve talked about in past interviews. It was a blast creating a mini-rogue-like experience within Godfall.