Gods Will Fall Review – A Smorgasbord of Different Influences

A tightly designed game with multiple elements working in tandem.

Gods Will Fall has a rather unfortunately generic name, but that belies how interesting and intriguing it really is. Gods Will Fall also looks like a smorgasbord of differing influences from various popular games of the last few years. That, also, belies how unusual it is with all its different pieces coming together in concert.

So, what is Gods Will Fall? It can best be described as a hack and slash, with elements of action RPGs and roguelikes thrown in for good measure, contextualized by storytelling taken right out of Dark Souls and Hollow Knight, wrapped up in a jarringly incongruent artstyle that would be better suited in something like Fortnite than this. Except for that last element, everything else comes together surprisingly well. The game gives you control of eight heroes, who are on a mission to take on the gods of their world, who, over the millennia, have become oppressive and cruel, tormenting their followers and raining misfortune on the land.

These eight heroes (who are randomized on each run) end up washed up on the island populated by their gods. Each god populates one dungeon, and one of your eight heroes can enter a dungeon at a time. Gods Will Fall, much like Hades before it, sidesteps one of the most common issues with roguelikes (their reliance on procedural generation) by having each dungeon be handcrafted, and fixed between runs. The layout and aesthetic of a dungeon never changes.

"Gods Will Fall’s true stroke of brilliance is in the push for emergent storytelling it represents, which builds upon its permadeath system."

What does change each time is the difficulty of a dungeon. A dungeon that might have been the easiest during your previous run might end up being the hardest this time around. The difficulty influences which enemies you encounter inside as well, meaning that while the layouts are fixed, the actual enemies you encounter in a dungeon will vary from one run to the other. There’s no way to know what difficulty a dungeon has without actually going in once – which leads to some extremely interesting situations thanks to the game’s death and relationships systems.

The way the game handles death is a blend of permadeath and the kind of corpse running popularized by Dark Souls, and then emulated by games such as Hollow Knight. Once your hero steps into a dungeon, the only way they can get out is if they get to its end and defeat its patron god. If they die, they’re stuck in there. But, they are not lost to you. If another hero enters the dungeon and finishes it successfully, they end up saving all the heroes who may have fallen in that dungeon before. So no death is truly permanent – unless all eight of your heroes end up trapped in these gods’ realms, in which case it’s game over, and this run is done for.

Gods Will Fall’s true stroke of brilliance is in the push for emergent storytelling it represents, which builds upon that permadeath system. Your eight heroes have different relationships with each other, different backstories, and different relationships with the gods. You may have a hero who is tormented by a specific god in his dreams each night, who ends up being terrified once you near that god’s dungeon. In this case, you will find their stats suffering from a debuff if you attempt to use them against that god. Conversely, they may want to prove themselves against their tormentor, and see a buff to their stats. Even heroes who may share no special relationship with a god could find themselves buffed or debuffed – if, for example, a friend of theirs went in, and didn’t emerge out (meaning they died inside), they could get demotivated, and suffer depressed stats. Or they could want to avenge that friend, and find their stats getting a boost.

These systems mesh together really well to create an interlocking framework of emergent narratives, that combine to help each run feel different from the last. Much like Hades before it, Gods Will Fall achieves this by relying on contextualization to achieve the variation, so that it can deliver a roguelike without forsaking hand crafted level design. 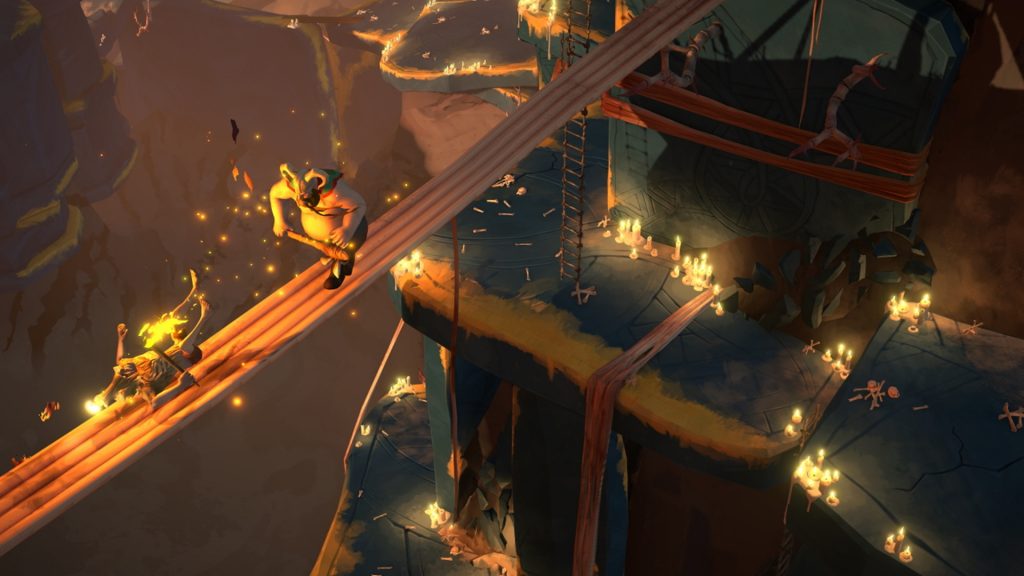 "These systems mesh together really well to create an interlocking framework of emergent narratives, that combine to help each run feel different from the last. Much like Hades before it, Gods Will Fall achieves this by relying on contextualization to achieve the variation, so that it can deliver a roguelike without forsaking hand crafted level design."

Gods Will Fall uses other systems married with its narrative design to support its gameplay as well. For example, to discourage turtling and defensive play (which is an issue that often plagues combat focused games), Gods Will Fall ties each dungeon’s boss’ strength to the number of enemies still left alive in that dungeon. In other words, the more enemies you kill, the easier the final boss fight for that dungeon becomes. To encourage offensive play, the game also has a “Valor” system, where even when you lose health, being offensive in combat nets you valor, that you can then convert to lost segments of health (meaning very literally, offense can often be the best defense in Gods Will Fall). Gods Will Fall also makes its dungeons not caves or grottos physically situated on the island you are on, but separate realms in other dimensions accessed by portals on the island – which means that the game is freed from the obligation of adhering to physical coherence, and each dungeon can have lots of variation in aesthetic and theme.

As much as Gods Will Fall gets right, there are definitely some missteps too. The biggest one here is the art style. The art style feels very bright and plasticky, like something you might see in a mobile game, or Fortnite, or Orcs Must Die. That is incongruous with the tone the game wants to strike, but in and of itself, that doesn’t have to be a problem. The trouble is that the game itself calls attention to it by having a gorgeous art style it uses for its storytelling and world building segments, that adequately strike the balance between feeling dark and foreboding, while also looking like something out of folklore. The game starts with that art style, and then abruptly switches to the Fortnite look. Which, it’s fine, and it looks good for what it is, I just don’t feel it is as much in tandem with the rest of the package as everything else is.

Gods Will Fall also suffers from some bugs (including at least one I encountered as early as the tutorial, where I basically got stuck in a room with the way to move forward not opening, forcing me to restart), though I have hopes that these may be addressed in future updates. The controls can often be annoying, especially the parry, which relies on you rolling towards the enemy at just the right time, an exercise in frustration, especially when compared with the game’s lack of a lock on (which otherwise isn’t a problem at all, but does exacerbate the trouble with the parry system).

The issues the game does face, however, don’t really detract from what it does achieve. Gods Will Fall has an unfortunately bland name, but underneath that unappealing and generic moniker is a tightly designed game with multiple elements working in tandem and marriage to deliver a one of a kind experience that further helps evolve roguelikes, and remove the traditional frustrations associated with them.

Final Verdict:
GOOD
Gods Will Fall's smattering of influences and banal title undersell some of its more brilliant design decisions, all of which work together to deliver one of the more imaginative and accomplished roguelikes in recent memory.
A copy of this game was provided by Developer/Publisher/Distributor/PR Agency for review purposes. Click here to know more about our Reviews Policy.