Gotham Knights Guide – Best Gear and Weapons, and How to Unlock All Suits

Having a tough time against Gotham City's crooks? Here are some of the best weapons and gear in the game, along with all the different suits to unlock. 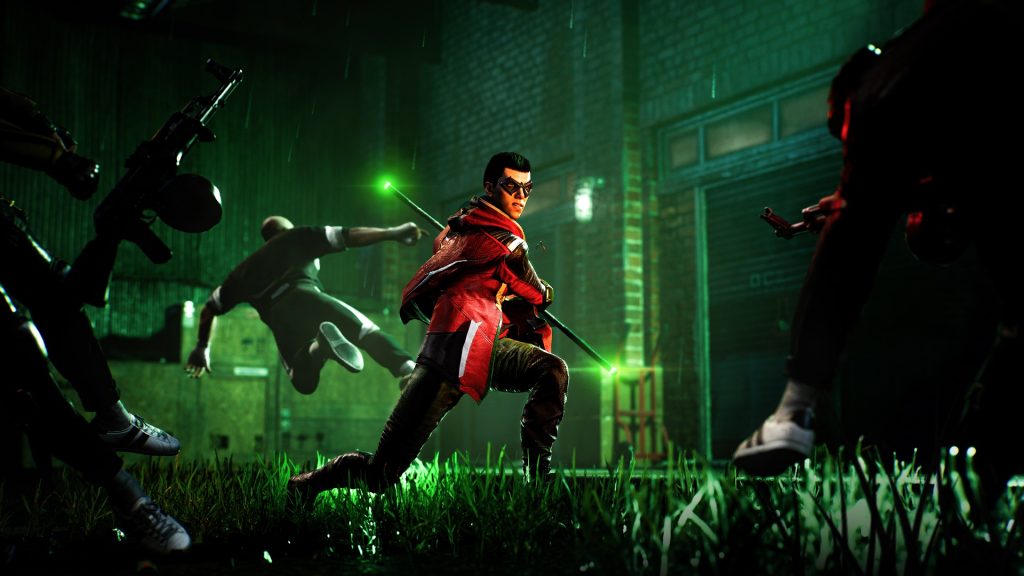 Since it’s an action RPG, Gotham Knights has a fair bit of loot, from gear to melee and ranged weapons. They can either drop randomly from defeated enemies, as rewards from missions, or obtained through crafting. Let’s take a look at some of the best items for each character, starting with Robin.

Robin is highly recommended for those seeking a stealthy approach in combat. You’ll want to go with the Linked Suit due to its three mod slots, granting invulnerability to the next hit after KO’ing an enemy with a perfect attack and briefly increasing damage dealt after using his Ultimate. Of course, providing health to Robin and his allies on revive isn’t too bad either.

For weapons, the Modular Concussive Bo Staff is great since it has three mod slots. If you KO an enemy, you gain increased critical damage and double elemental damage on your next hit. You can pair this with the Cryogenic Slingshot for freezing enemies (and gaining Momentum upon KO’ing foes with a perfect attack) or the Team-up Incendiary Slingshot for Incendiary damage.

Nightwing is more evasive and provides some great support abilities for other heroes. As such, going high defense is advised, which means the Reinforced Suit is the best choice. It offers a whopping 6800 Defense and three mod slots, along with healing over time after an enemy is KO’d. Perfect evades increase critical damage, and when your health is low, you gain more defense. Truly an all-in-one solution.

The League Basic Escrima Sticks will increase critical hit chance and damage but are also best for dealing Incendiary damage. Since the Toxic Darts deal Poison, you can essentially build up these two status effects to slay even the toughest enemies.

Red Hood specializes in ranged damage, and the Gold Pistols with Gold Rounds are especially good for Cryo damage. By equipping mods for elemental build-up, you can easily freeze enemies and cause massive damage by meleeing them. If you prefer to stay at range, the Critical Momentum Pistols are also good. Upon using a Momentum ability, you gain an increased critical chance. Critical hit chance also increases when scoring headshots on enemies. Pair these with Overtime Effect Rounds for health over time and Momentum generation upon executing a Perfect Evade.

As for armor, the High Ultimate Suit should be your priority. Not only does it have three mod slots, but it also increases damage and grants some health back when using a Knighthood ability. If you want to lean further into Cryo damage, then the Gold Armor is worth equipping.

Finally, there’s Batgirl, a Jill of all trades thanks to her proficiency in fighting, stealth, and even hacking. The Counter-Talon Suit provides a hefty amount of defense and health but the Cryogenic Suit is also recommended, due to its strong resistance to Cryo (making it great against Mister Freeze). In terms of weapons, the Modular Incendiary Tonfa is good due to its Incendiary damage, which combines well for more critical hits. The Overtime Effect Batarang is recommended for ranged combat since it restores Momentum and grants extra critical hit chance and damage.

All Suit Styles and How to Unlock

There are multiple different suits to unlock throughout the game, but each has unique Suit Styles which could be used for transmog purposes. This allows for using the stats of specific gear while keeping the look of a suit. Each suit has its own unlock and transmog requirements, so let’s first take a look at all of the different types in the game.

There are four suits per hero in each type, and some are locked behind the Deluxe Edition and Visionary Pack DLC. Along with dropping randomly from enemies and as mission rewards, they can also be crafted. For more details on obtaining each suit, check out the video below by Batman Arkham Guides. It also showcases the different customization options and colorways.

Gotham Knights is out now for Xbox Series X/S, PS5, and PC. Check out our official review here.