Releasing on March 4th for PS4 and PS5, Polyphony Digital's gorgeous racing sim is packed to the brim with new features and things to do.

With roughly a month until release, Polyphony Digital’s Gran Turismo 7 has received tons of new details courtesy of the latest State of Play. From hyper-realistic visuals to new features, Sony’s flagship racing title is looking to be an instant classic. Let’s take a look at 15 new things you should know before its release on March 4th for PS4 and PS5.

Originally reported and now officially confirmed, Gran Turismo 7 will have over 400 cars. These include brands like Aston Martin, Alpine and Alfa Romeo to BMW, Bugatti and Ferrari. Whether you’re a rally racing fan who embraces Peugeot and Lancia or a Volkswagen and Chevrolet fan, there’s bound to be a car for you. 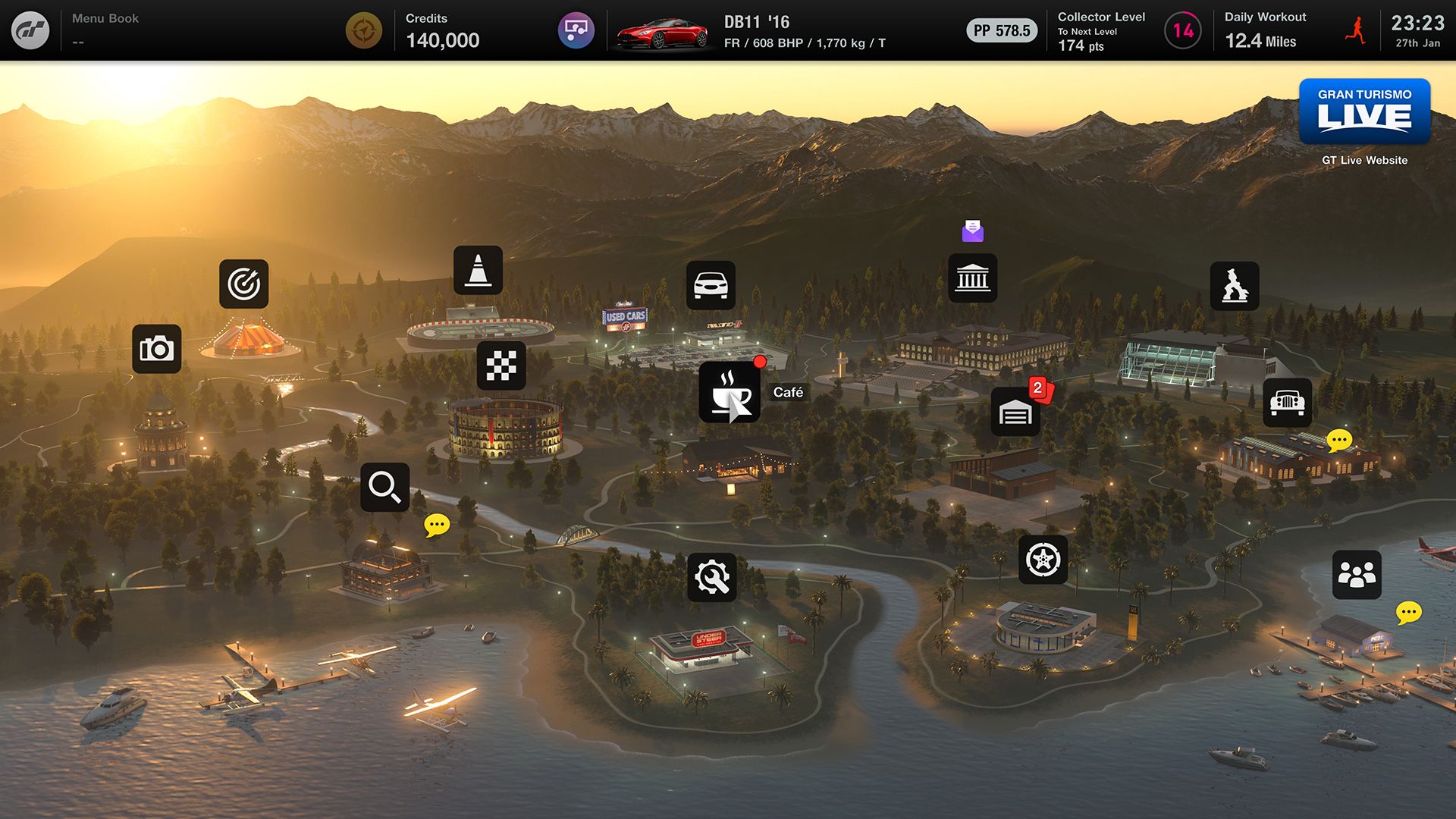 One of the many key aspects of the title is its car collecting mindset – it wants to emphasize the unlocking and earning of each car. One of the avenues for earning new cars is Brand Central. It offers some 300 cars that can be purchased, with models from over 50 brands available. As you race and earn credits, you can stop by and pick out some new vehicles. 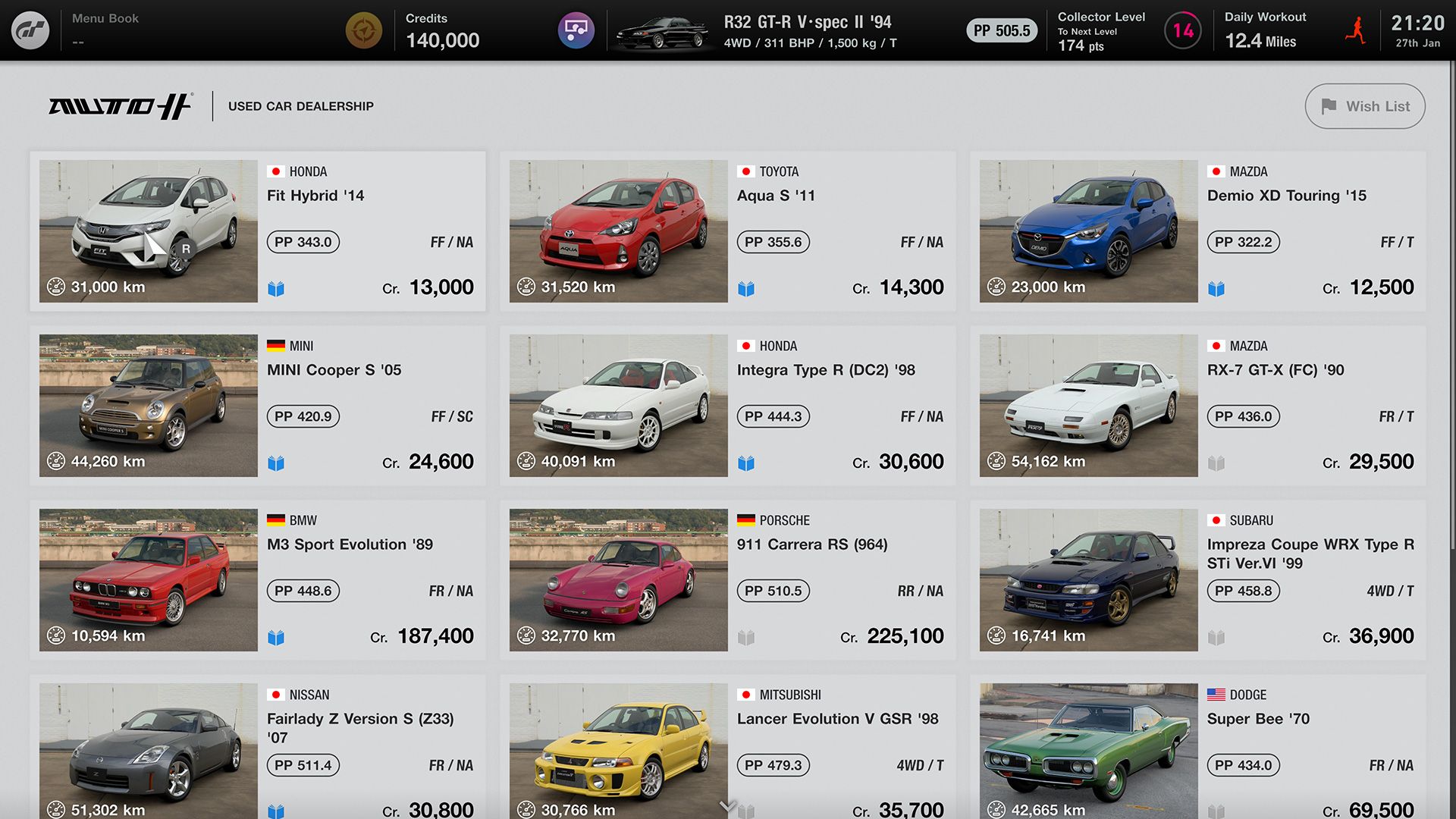 Whether you’re short on cash or just seeking out the best deals, the Used Car Dealer is also worth a look, providing certain vehicles at lower prices. Its lineup is updated each day but beware – certain used vehicles, especially Japanese sports cars from the 90s, may end up being more expensive based on current trends. For those seeking the most iconic vehicles, there’s also the Legendary Car Dealer. The choices here range from the Porsche 917K ’70 for a whopping 18 million credits to the Aston Martin DBS ’64 for one million (with the lineup also updating daily). Suffice to say, this is a more exclusive selection for car enthusiasts with enough cash to spare. 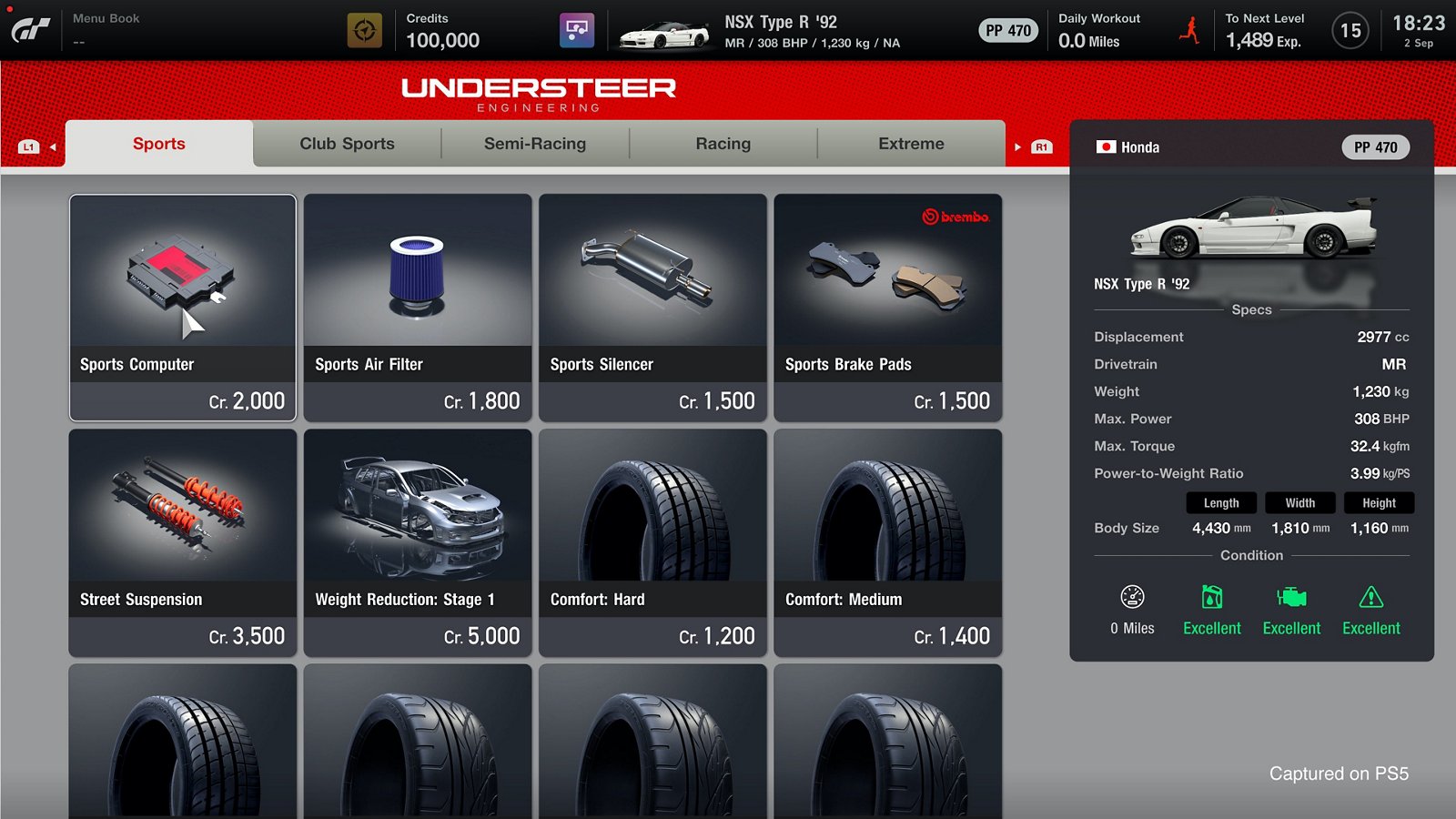 Polyphony Digital previously claimed that Gran Turismo 7 would have the most number of parts for tuning in the series yet. Shock of shocks, it wasn’t kidding. Each car has 60 performance part types, whether you’re adjusting its appearance from numerous wheel types and over 1,200 colors or customizing the suspension, rims, or adding modifications like roll cages. There’s “several thousand” customization parts in total, ensuring that players find their ideal set-up while also offering lots of room to experiment. 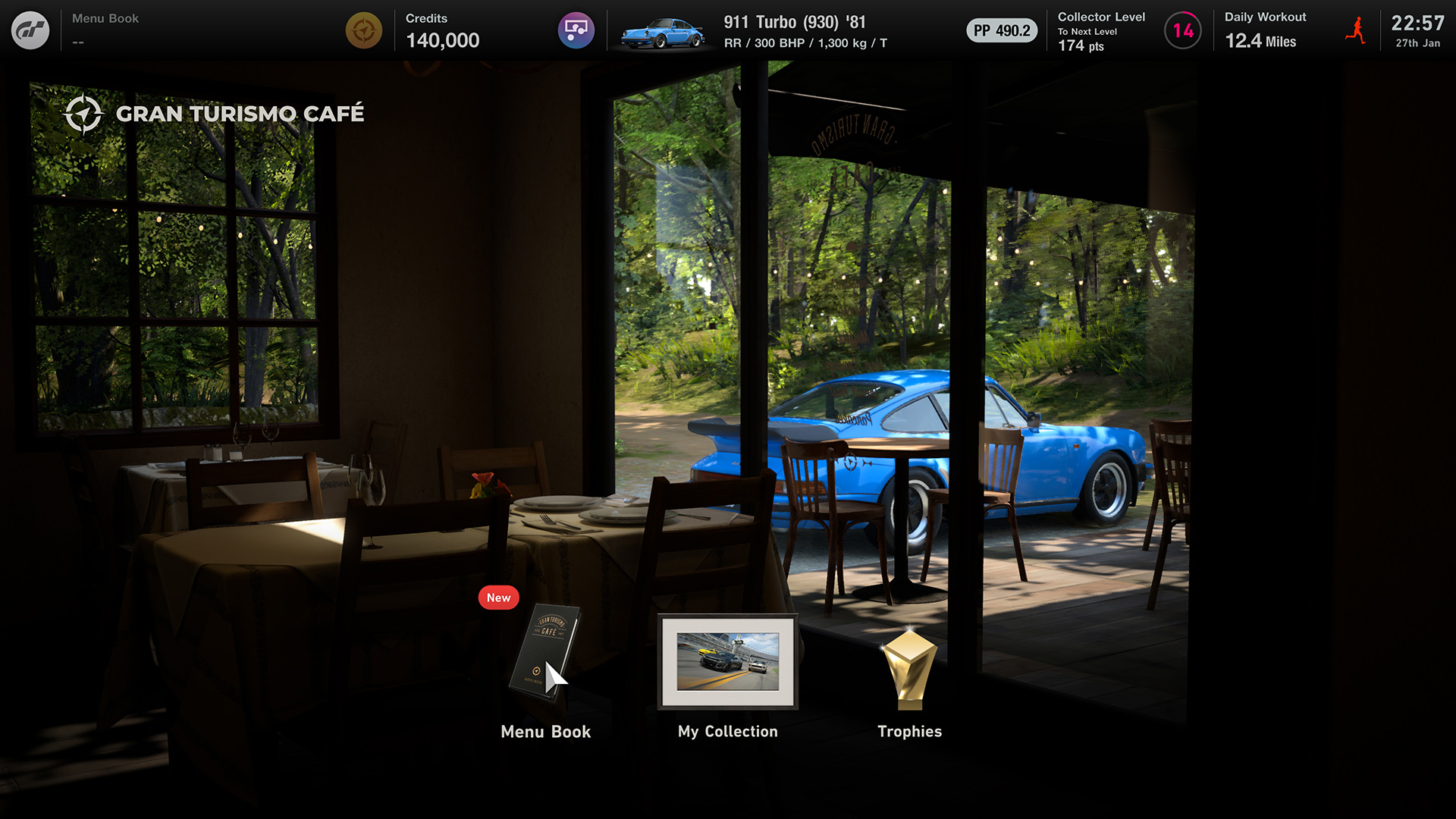 The return of a proper campaign will no doubt please fans, especially given its absence in Gran Turismo Sport. Situated in the center of the World Map, the Gran Turismo Cafe takes a very interesting approach. It essentially provides a Menu Book with missions for a specific car like, say, the Porsche 911. There are 30 Menu Books in total and as you complete different tasks (like collecting three different Porsche 911 models), you’ll learn more about the history of different vehicles. You’ll even meet the designers themselves in the Cafe, who will offer their own perspective on each car. It’s a more personal approach that immerses players in both racing and the overall culture surrounding the cars.

If you want even more information on the history of specific brands like Mercedes Benz, Dodge and Porsche, the Museum is also a great place. Along with timelines for each, detailing major events like the birth of their creators and the introduction of specific vehicles, there’s tons of archival images and designs to flip through. Once again, the idea is to create a more personal connection to the cars and a deeper appreciation for the culture as a whole. 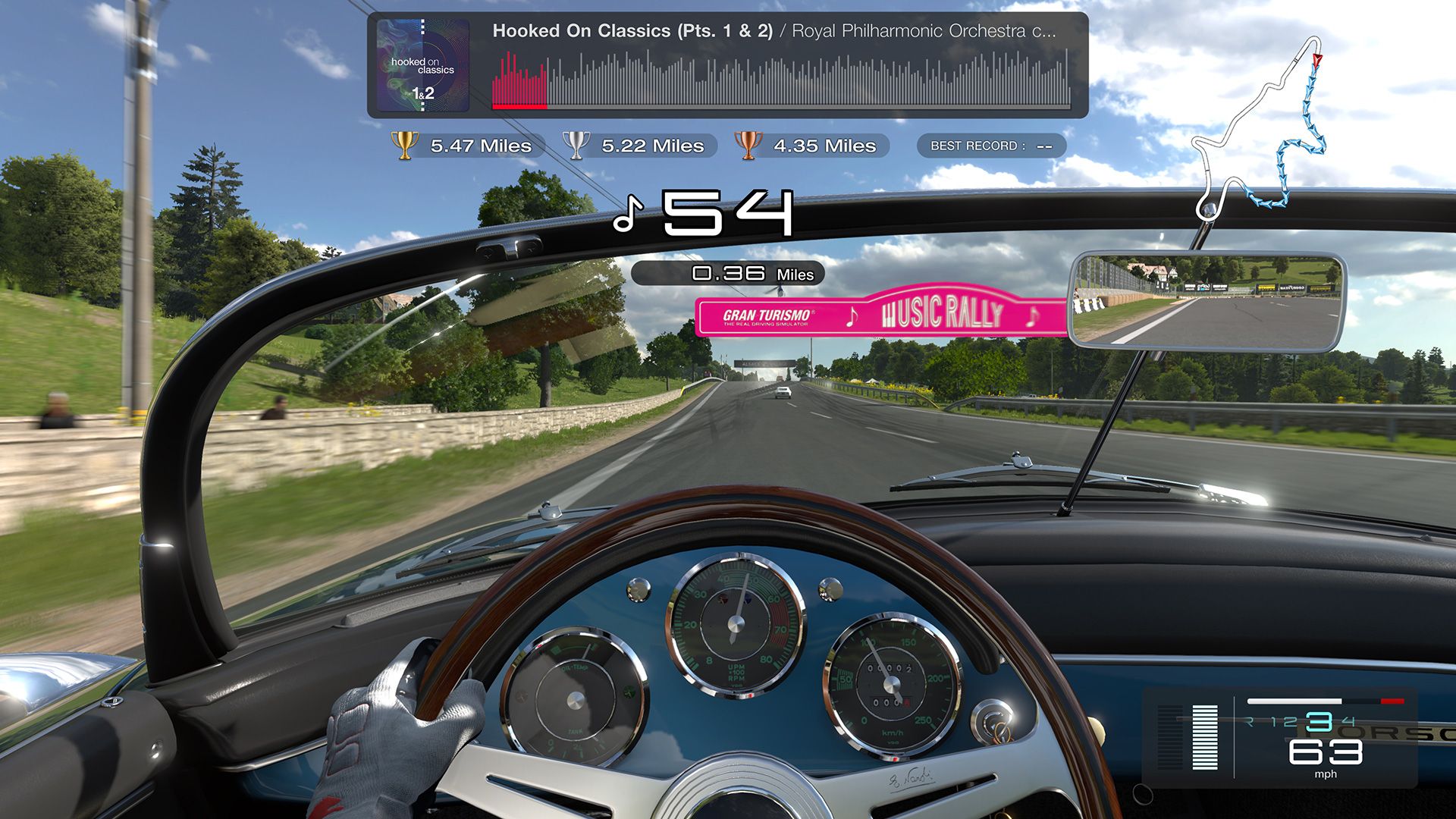 While time trials and the like are featured, Mission Races provide a bit more spice. This is where special race types like drag racing and Drift Trials await, the former testing your knowledge of throttling and tuning for speed while the latter is all about drifting skill. License Tests also make a return, pushing you to test your knowledge of different techniques, from the basic to the most advanced. And yes, you can once again struggle to achieve a Gold in each test, just like the good ol’ days. There’s also Music Rally where the player must race through different course markers to the beat of a song, providing a more casual experience. 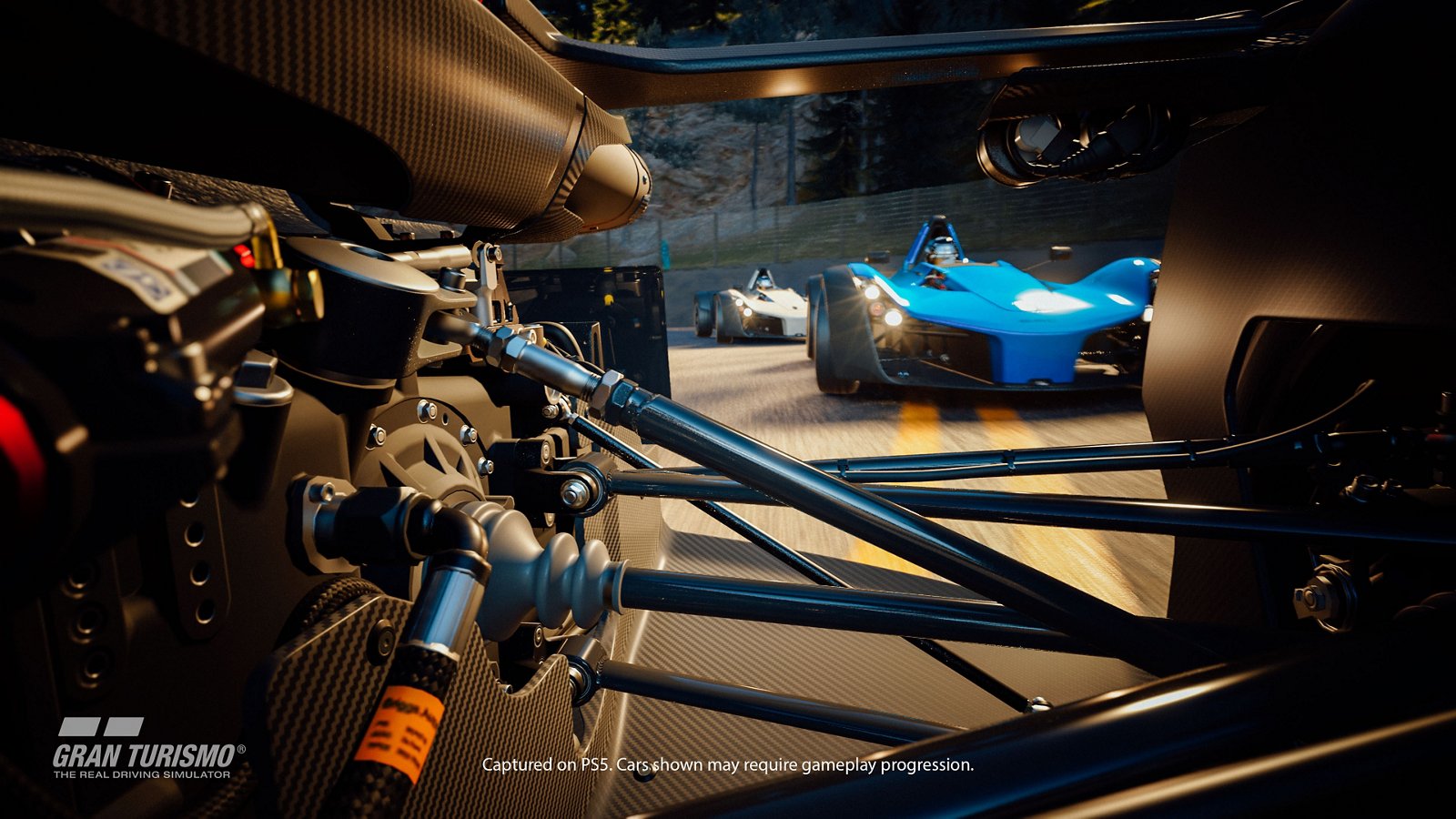 Dynamic weather and time of day make a return in Gran Turismo 7. But if you want to specifically set weather conditions for a race, then the Custom Race Mode will help in that respect. It’s also possible to adjust the level of AI drivers, number of laps, the course and so on. Other options have yet to be fully showcased but it should provide enough opportunity for players seeking the right challenge and conditions.

34 Locations and Over 90 Track Layouts 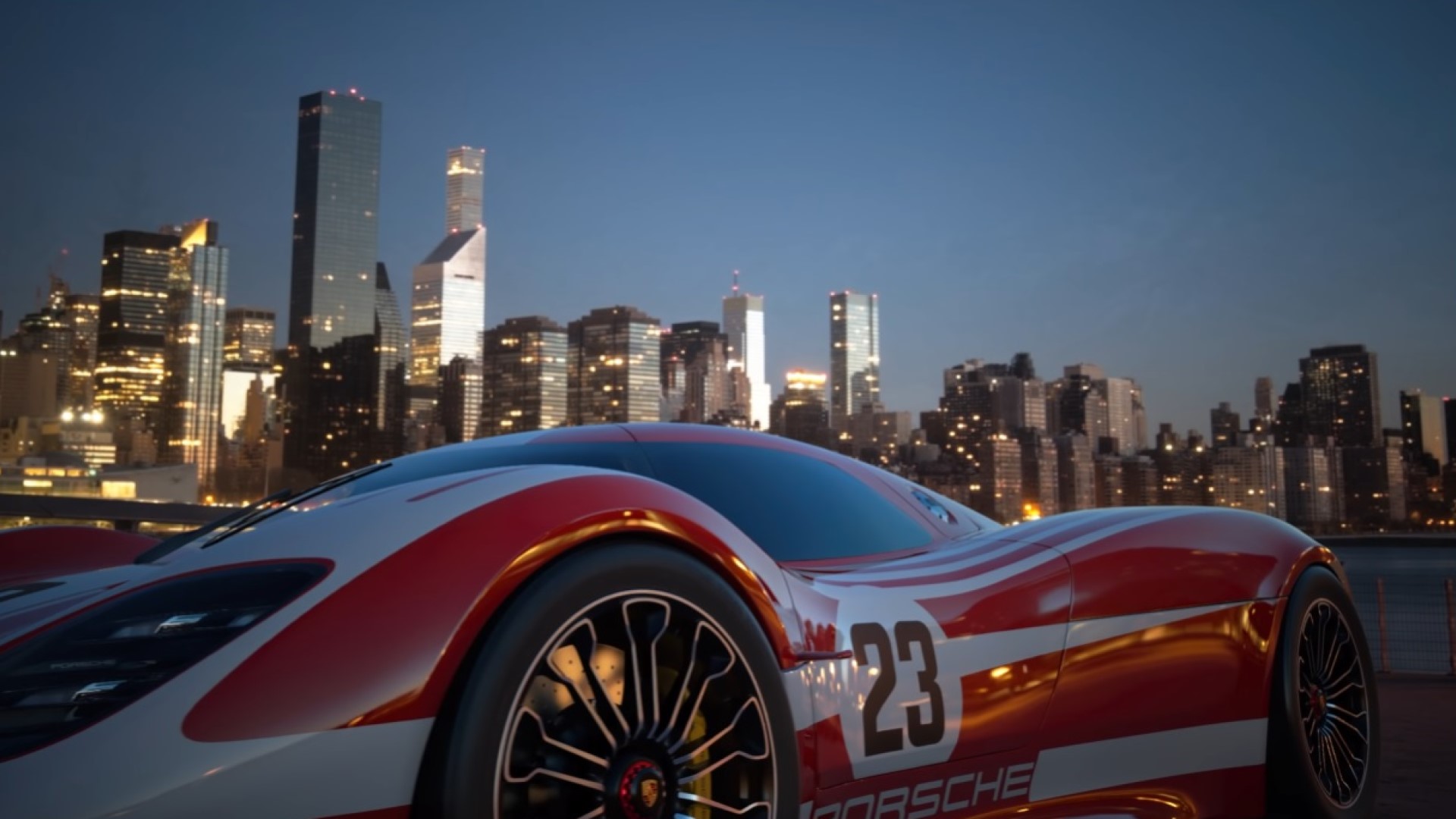 The World Circuit offers 34 locations throughout the world with over 90 track layouts. Iconic tracks like Blue Moon Bay Speedway, Daytona International Speedway, Nurburgring, Tokyo Expressway and many more are confirmed. Fans can also look forward to the return of classic tracks like Trial Mountain, Deep Forest and High Speed Ring. 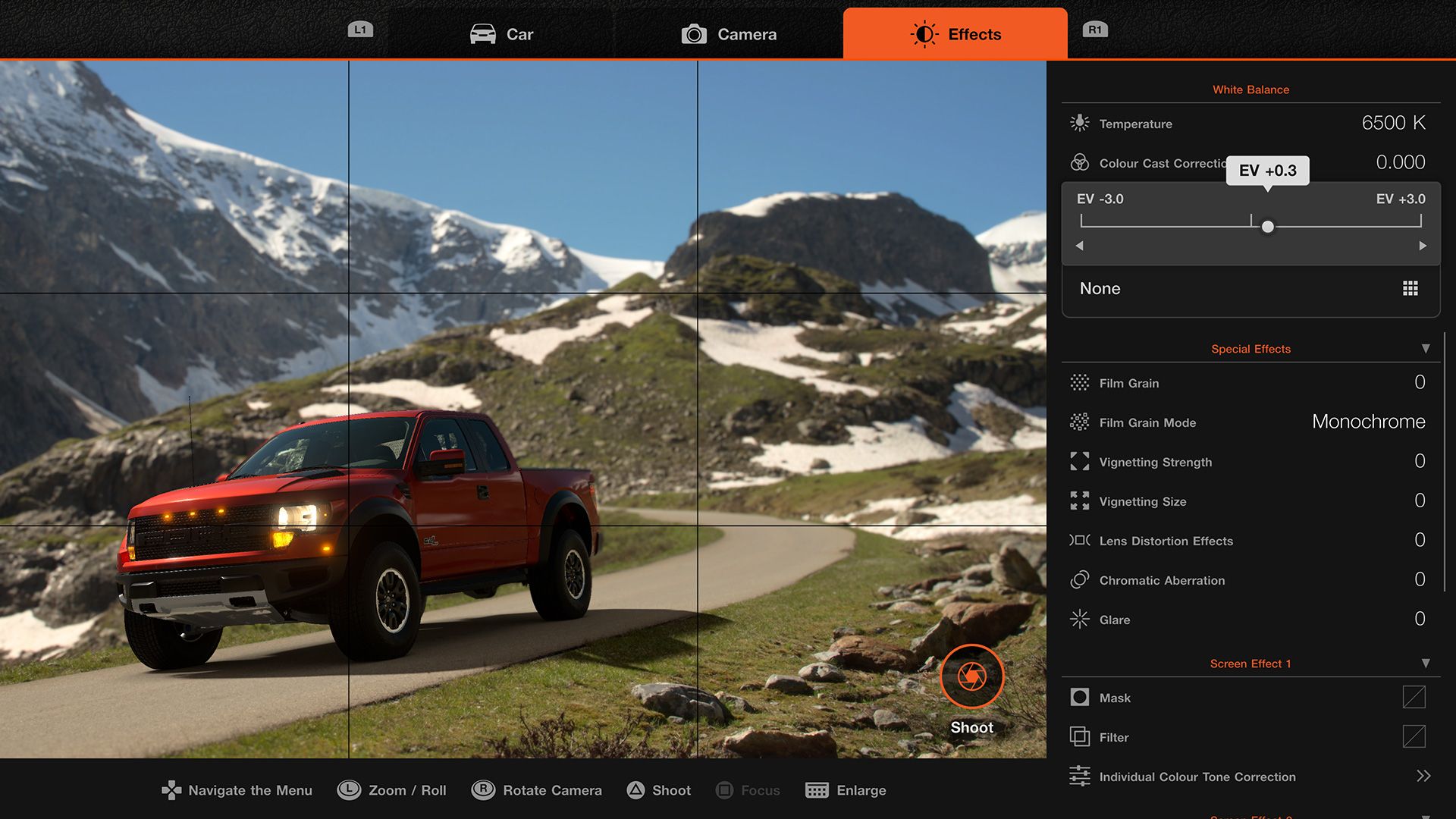 Scapes returns in Gran Turismo 7, offering players a tool for photographing their cars in various real-world locations. There are over 2500 locations to photograph in, which is a pretty big jump compared to Gran Turismo Sport’s 1017 locations (and more will likely be added post-launch). So if you want to see how your favorite vehicle looks in a variety of settings with sleek HDR, then Scapes should provide plenty of enjoyment. 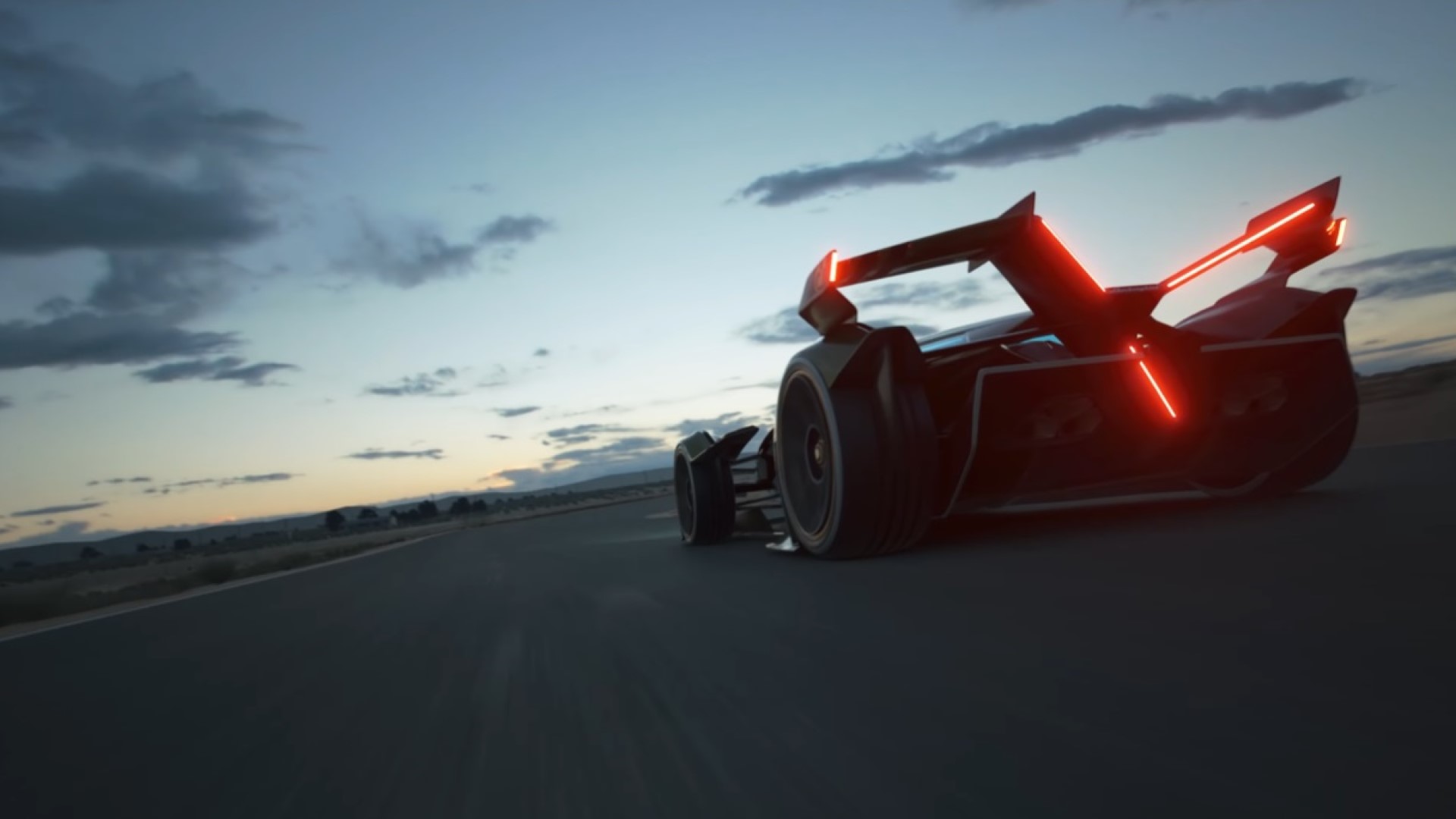 A lot of work has gone into the implementation of time of day changes and weather. Drawing upon weather data to capture the specific composition and colors of the sky for each region, along with rendering the placement of stars based on their locations at specific times of day are just a few details to look forward to.You can expect the Moon to rise and set along with the stars’ color to change based on the atmosphere. Weather changes will also affect a track, especially when certain sections are dry and others are wet, affecting tire grip and engine power among other factors.

The series’ physics simulation has always been top-notch and the sequel is no exception with the likes of Lewis Hamilton and Michelin providing feedback. But it’s interesting to see how the PS5’s DualSense is used to simulate different phenomena in a race. The adaptive triggers and haptic feedback simulate tire lock while braking along with the feel of front tires when taking a corner at high speeds. 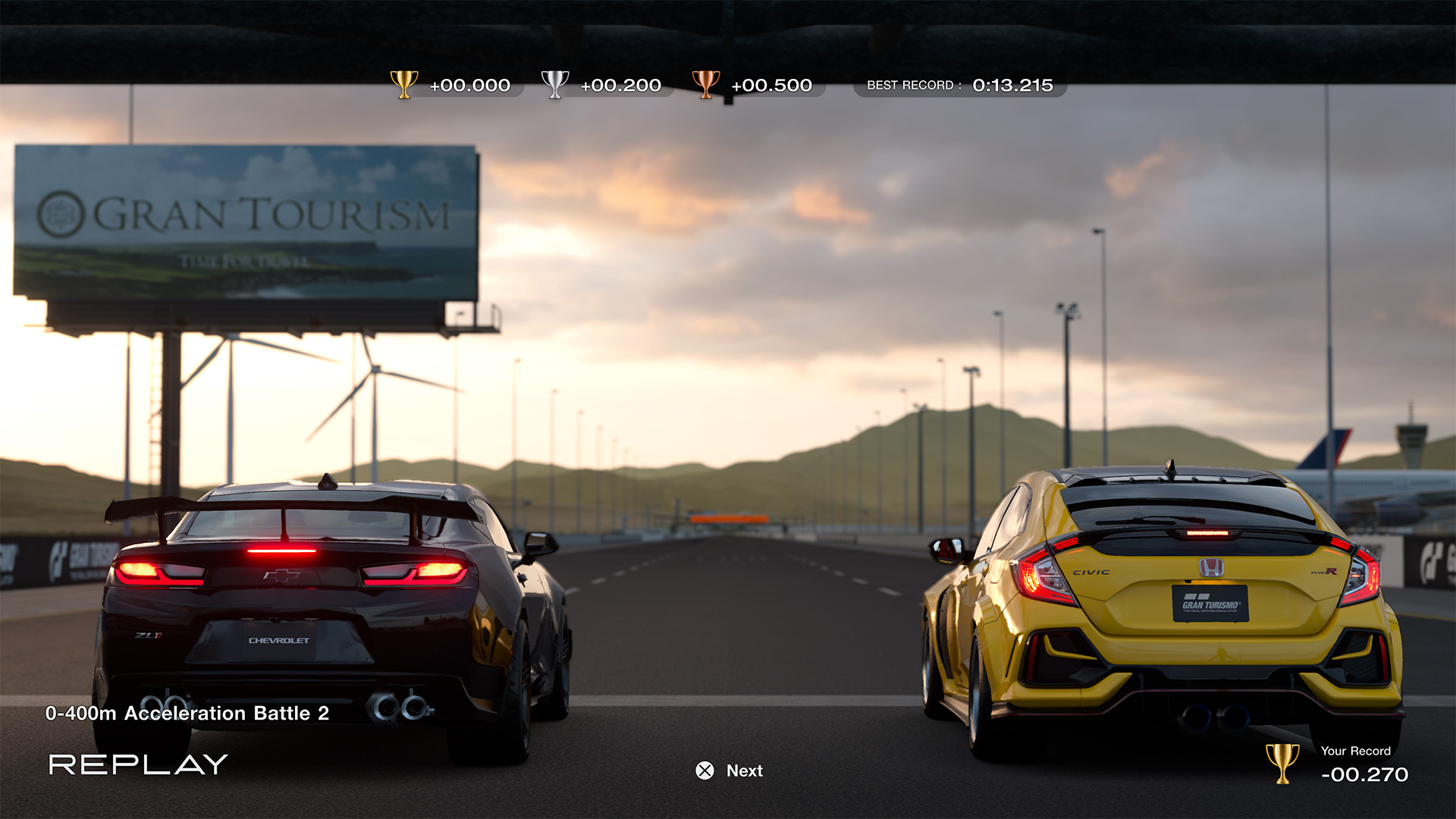 Aside from Scapes, there’s a lot to love about the content creation options available. Race Photo allows for capturing images from any races you’ve been in while Replay Mode allows for going back and watching a race in full detail with ray tracing enabled. The most interesting new option is Music Replay which generates a replay with cuts, transitions and camera positioning based on the background music. With over 300 songs by 75 artists, there are a number of possibilities.

Polyphony Digital previously confirmed feature parity for the PS4 and PS5 versions, which means cross-gen multiplayer will be available. It also noted that players can host Lobbies and interact in various Meeting Places. There’s also Sport Mode which seems to be a more competitive-minded mode since it offers “serious racing” with others. But if you’re not interested in online multiplayer at all, then good news – two-player split-screen is confirmed, allowing one to play in the comfort of their home with friends. 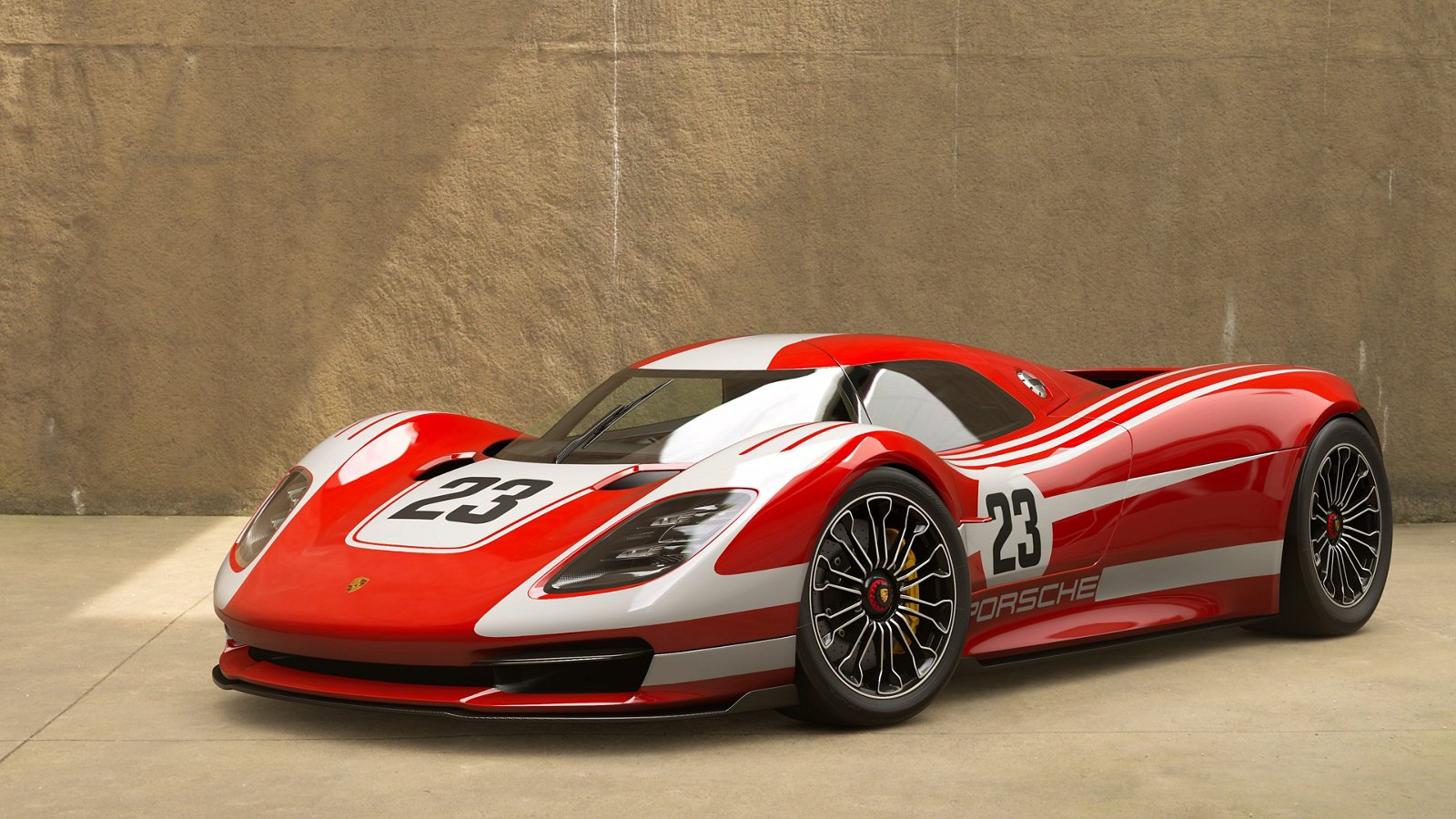 For all of the content that one can create in Gran Turismo 7 – whether it’s photographs from races or in Scapes, livery designs, or replays – there’s the Showcase. Players can share their work online, favorite others’ pieces, filter through different kinds of content, look through Recommended and Trending content, and much more.