Escape your pursuers by siccing rival gangs on them.

Revealed via an update on GameStop’s official Facebook page, it seems there’s a new way for one to outrun the authorities in Rockstar Games’ upcoming Grand Theft Auto 5. 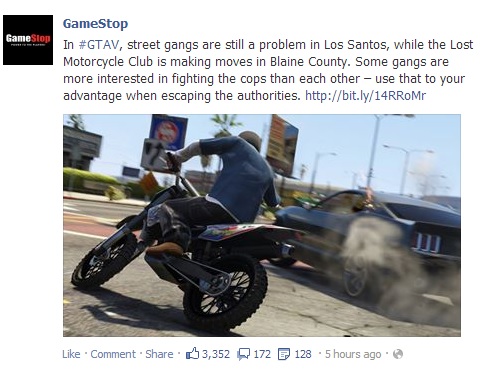 “In #GTAV, street gangs are still a problem in Los Santos while the Lost Motorcycle Club is making moves in Blaine County. Some gangs are more interested in fighting the cops than each other – use that to your advantage when escaping the authorities.”

This is highly reminiscent of the Saints Row franchise, wherein rival gangs will immediately begin fighting cops if you enter their turf, guns blazing. Given the size of GTA5’s world though, one would hope that you won’t need to run all the way out to the countryside to get some help from the Lost.