Guacamelee was a pretty damn good game when it was released last year, originally for the PS3 and PS Vita. A few months later, it was also released for the PC over Steam, and we found that its quality hadn’t degraded at all in the intervening time period– rather, the additional goodies that were included in the package made the appropriately titled Guacamelee! Gold Edition the definitive way to play the game.

Now, wanting to capitalize on the launch of the new consoles, the developers, Drinkbox, have ported it to pretty much every other gaming platform as well- the hilariously titled Guacamelee! Super Turbo Championship Edition has come to the PS4, Xbox One, and the Wii U, and in the process, they’ve gone back to the drawing board and made this new edition a bit, well, more of everything it was that made the original game so good. There’s enough new stuff here to warrant a playthrough even if you have already seen all that Guacamelee had to offer before this. If you haven’t had a chance to play the game yet, well, this new edition is the best place for you to jump in. 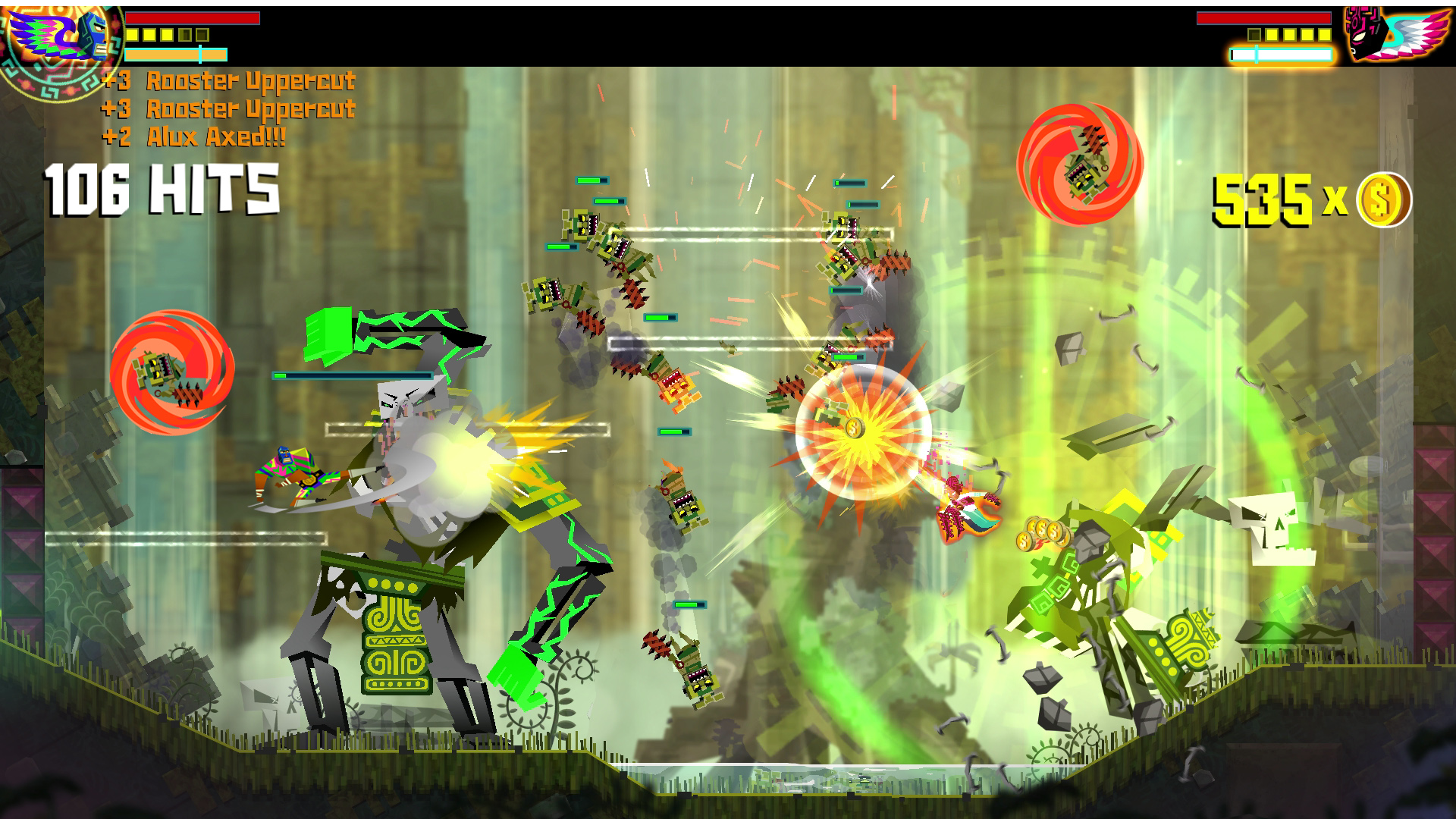 "Fundamentally, Guacamelee! Super Turbo Championship Edition remains the same game that we fell in love with last year. So everything that we enjoyed about the older game is back here in full force, and it's as good as ever."

Fundamentally, Guacamelee! Super Turbo Championship Edition remains the same game that we fell in love with last year. So everything that we enjoyed about the older game- the the great soundtrack, the witty dialog, replete with references to Nintendo classics such as Metroid and The Legend of Zelda, and the tight if slightly forgiving platforming- is back here, and in full force, and it’s as good as ever. If you want to learn more about exactly what kind of game Guacamelee is, I direct you to my review for the Gold Edition on Steam (linked above), or to GamingBolt’s review for the original release on the Vita and PS3 (also linked above). Both will tell you a whole lot about the game Guacamelee! is, and will save me the trouble retreading old ground again. For the purposes of this review, suffice it to say that the game is a Metroidvania, an excellent Metroidvania, with some dashes of Zelda thrown in.

What I will focus on here are the differences from the original game. Like the Gold Edition on Steam, Super Turbo Championship Edition comes with all of the DLC that the original game had included in the package right off the bat. That right there provides some great value and some neat new platforming fun, but this edition also includes the El Infierno DLC pack, that was made available for the original game in the form of post launch paid content. El Infierno adds a series of challenge rooms that present the player with various platforming challenges to overcome, and is a substantial dose of additional content to the base package here.

Guacamelee doesn’t stop there, either. It adds some all new areas and levels within the core game campaign itself, which are at least as high quality as the original content, if not even better. The new areas see you take on a whole host of platforming challenges and new enemies, which weren’t actually available in the original game, as well as a new boss, who is probably the hardest boss in the entire game so far (and, in some ingenious and witty retconning, actually manages to work his way into the main overall story as well).

But that’s still not all Guacamelee adds to the overall package. it also includes several smaller, quality of life enhancements, such as health bars over enemies (so you know how close you are to taking them out), and an all new Intenso mode, which is basically a mode that grants you fill invincibility for a while. To go ‘Intenso’ you need to fill out a bar- once filled, you essentially go nuts, and are able to dispatch enemies with ease. The Intenso bar can be upgraded by finding secret collectibles hidden all over the world, and while Intenso mode makes the game’s easy combat even easier, it also addresses a key issue that we felt the original game had- the combat eventually devolved into repetitive button mashing, things became rote, and the fighting tended to drag the rest of the admittedly excellent game down a bit. Here, thanks to the Intenso mode adding some variation and spice to the combat (and also a new risk/reward dynamic- do you want to go out of your way to fill up the bar, but risk danger along the way?), that problem is no longer a consideration. 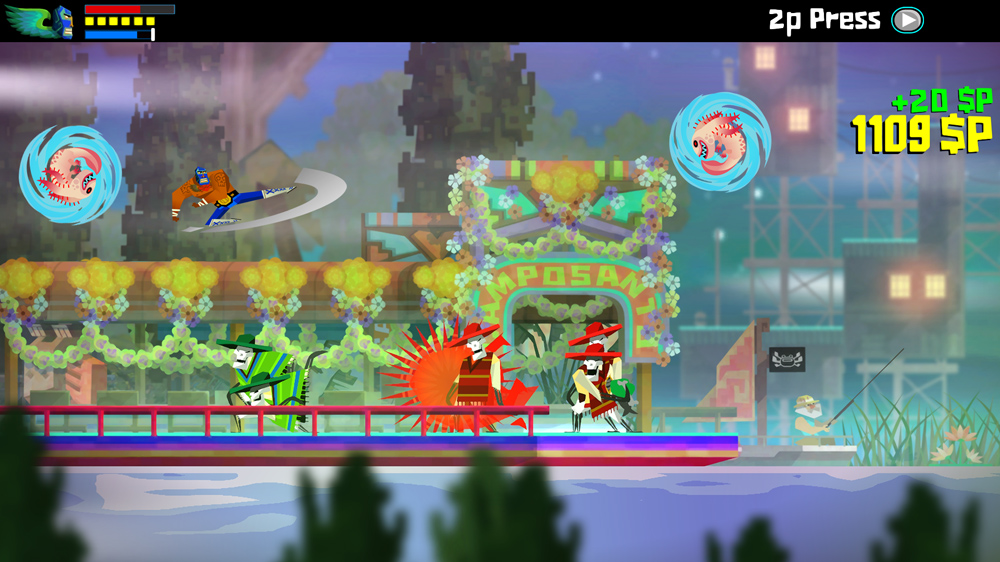 "Guacamelee! is a fun, high quality, surreal romp, and it showcases some of the best flexibility that its genre has to offer."

An unexpected downside of this all, however, tends to be sped up combat. People familiar with the original game will probably recognize why this is an issue, but to specify- Guacamelee! is a short game. Combat tended to drag things out, yes, but it also slowed things down. Nonetheless, this was an artificial lengthening of the game, it amounted to padding of the worst kind, so it’s kind of nice that that issue’s been addressed to an extent. That, in conjunction with the fact that there are now so many extra additions that all add to the meat of the package, do address one of the other major flaws that both the releases of this game last year had- they fix the issue of this game’s longevity and length. You will now get even more bang for your buck with Guacamelee! than you previously did.

Ultimately, this is a very heavily recommended purchase. Guacamelee! is a fun, high quality, surreal romp, and it showcases some of the best flexibility that its genre has to offer. If you haven’t yet played the game already, this new release is the best place to jump in. If you have either a PS4, Xbox One, or Wii U, and are looking for a high quality game to play, look no further than Guacamelee! If you already played through the original release, Super Championship Turbo Edition is still highly recommended, simply because it enhances the original’s experience so much.

The same humor, the same great platforming and Metroidvania design, the same great soundtrack and the bizarre trip through video game pop culture, along with a host of new additions such as all the DLC, an all new mode, and minor changes to the game experience, all of which collectively make this the best Guacamelee! has ever been

If you've played it already, you might not want to go through it again

Final Verdict:
SUPERB
Guacamelee! Super Turbo Championship Edition is simply the best the game has ever been.
A copy of this game was provided by Developer/Publisher/Distributor/PR Agency for review purposes. Click here to know more about our Reviews Policy.