Muse Games have announce a new MMO, Guns of Icarus Online. The first teaser trailer, press release and concept art are below.

Guns of Icarus Online is a multiplayer airship combat game where you will attempt to survive and thrive in the post apocalyptic wasteland, moving from town to town, trading and collecting resources, outfitting your ship, and battling deadly pirates.Visit the website for a look at our beautiful teaser and find out more about the game.

The wasteland is a tough place, but you won’t be alone. Every ship can have multiple human or NPC crew members.With a flexible skill and leveling system, every crewman brings something unique to the ship. No one sits idly during a firefight. Expect to find your pilot putting out a fire or your mechanic manning the guns at any moment. With many airships to outfit, each with its own strengths and weaknesses, it will take a competent captain to make the most out of each trip. Dangers will be lurking everywhere and they won’t just be pirate ambushes; expect to find opposing players out hunting for your cargo as well.

Each town competes and trades with its neighbors to survive in the wasteland. Your reputation will rise and fall with your actions in each town, opening and closing new options elsewhere for profit. Don’t like how the towns run things? Soar into the unknown and find new resources to establish a town of your own. Join other players to make your town prosper while defending it from raiders who want to plunder your riches. 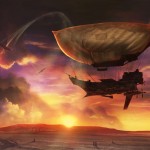 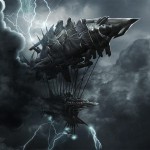