H-Hour: Worlds Elite Wiki – Everything you need to know about the game

Everything you need to know about H-Hour: Worlds Elite.

H-Hour: Worlds Elite is an upcoming first person and third person shooter that is currently in development by SOF Studios, an “indie game developer for PC and PS4”. Running on the PlayStation 4 and PC, the game (which will be powered by Unreal Engine 4) is a spiritual successor to (though not related to) the much loved SOCOM series of hardcore tactical shooters.

SOF Studios are slated to self publish the game which is being developed as a cross platform 8th generation title. The game will be launching on the PS4 and Microsoft Windows PC’s. The PC build will enter early access through Steam in March of 2015 whereas the PlayStation 4 release date is yet to be confirmed, though it is expected to arrive in Q3 or Q4 of 2015. The game will not be receiving a retail launch and will instead only be available via digital download.

H-Hour: Worlds Elite is the result of a successful Kickstarter campaign that came to a close in July of 2013.

H-Hour: Worlds Elite’s development is being handled by SOF Studios, an independent game development studio located in Southern Pines, NC. The development team numbers somewhere in the region of 11 – 50 workers and the studio was founded in 2011. Heading up the team and helping lead the development as the games Creative Director is David Sears, a well respected designer who has in the past served as the creative director for the hugely popular, and rightly so, SOCOM: US NAVY SEALs series of tactical shooters that launched on the PlayStation 2 and PSP to massive acclaim.

Because of the similarities between SOCOM and H-Hour: Worlds Elite, there are a number of gameplay design choices that are being carried over and incorporated into the game. The games first build was constructed in the Unreal Engine 3 and it was then migrated to the considerably more powerful Unreal Engine 4 at a later date. Whether or not this was a planned transition or just a worthwhile opportunity remains to be seen.

H-Hour: Worlds Elite is currently going through its development cycle on PC and as such is set to release on Microsoft Windows through Steam. It is then going to be ported to the PlayStation 4 at a later date, though information on this build of the game is scarce. 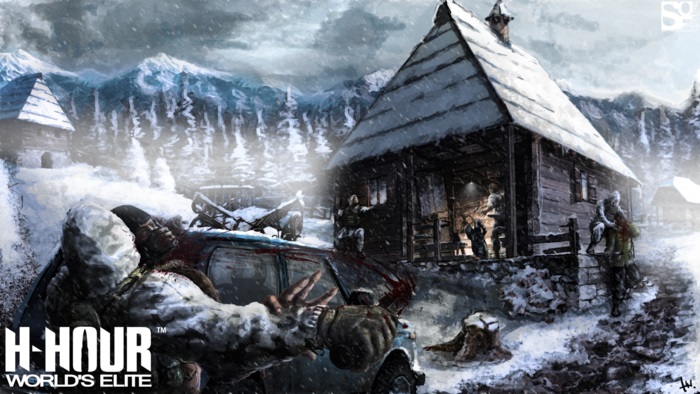 H-Hour: Worlds Elite is a first person and third person tactical shooter with quad based gameplay mechanics. It’s not quite as arcade-like as Rainbow Six, but neither is it a hardcore Mil-Sim, (military simulation) like Pandemic’s “Full Spectrum Warrior” or Codemasters “Operation Flash Point: Dragon Rising.”

Despite being advertised as a successor to the deeply loved SOCOM series, the game currently features no single player campaign and it is very much designed as being an online experience. The only playable portion of the game that is planned to be included when it’s released via early access is going to be the multiplayer suite. Even then, it will only ship with 6 maps and 4 gameplay modes. What these maps are like and which gameplay modes will be available has not yet been addressed.

This multiplayer suite will only support 8v8 teams upon release (gameplay modes might reduce this number further) but the real concern comes from the Dev’s only planning the possibility of expanding the player count and testing larger battles. The single player component of the game

Upon release the game will be multi-player only. Campaign mode is scheduled as part of semi-annual DLC releases.

Given the boom in online multiplayer since the early days of the SOCOM series, there’s little surprise that the game will have a heavy emphasis on community. The players of H-Hour: Worlds Elite will be able to form clans and teams by using a built in tool suite that allows for dedicated clan pages, logos and badges as well as a clan “constitution” where you can state your clans working philosophy (reactionary combat, slow but accurate, silent and fast gameplay styles for example).

Similar to a game like Counter Strike that rewards skilled players regardless of their weapon selection, H-Hour: Worlds Elite will not require players to unlock their weapons and equipment. Rather, the game will launch with all possible weapons and combinations instantly available to the player, this helps emphasise the reliance on skill over weaponry. A small calibre sub machine gun is just as lethal to a human as an anti material rifle if used properly. Whereas a game like call of duty will give you a stronger weapon than other players, all of the weapons in H-Hour: Worlds Elite will share a set of base stats that are augmented with attachments that best suit players. 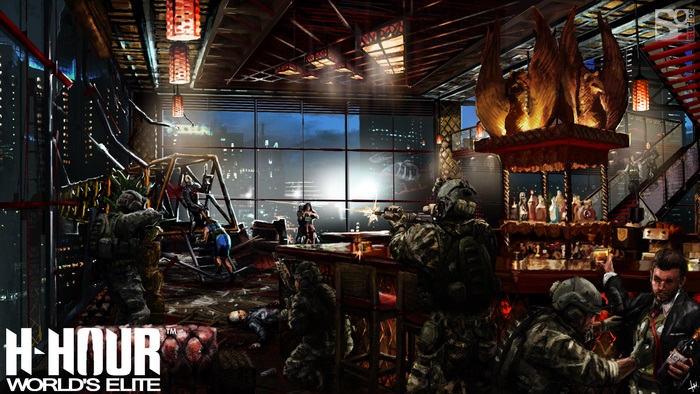 As mentioned above, the game will not make use of classes, rather each player decides upon their individual load out to best reflect their play style and to maximise their personal attributes.

Players with fast reactions for example can use something with a lower rate of fire that packs more punch because typically, if they react fast and accurate enough they will come out of the encounter on top.