Halo Infinite – 13 New Things We Learned About It

Here's everything that 343 Industries have revealed about their upcoming shooter.

A new Halo game is always a huge deal, but one that serves as a launch title for the next Xbox console, and one that claims to be a spiritual reboot of a series that has lost its way in recent years, is infinitely more exciting. Halo Infinite has been a bit of a mystery for as long as we have known about it though, but after two years of almost complete silence about the game, at the recent Xbox Games Showcase, 343 Industries dropped a proper gameplay reveal of the upcoming shooter’s campaign, following which even more details on it have also emerged. Here, we’ll be talking about the twelve biggest and most interesting things we have learned about Halo Infinite thanks to that reveal, and other information that has followed in its wake.

The rampant Cortana has gone off the radar and is nowhere to be found, while Master Chief himself is adrift in space- and has been for a while. At the beginning of the game, he is found by a character called the Pilot (whom we first saw in the E3 2019 trailer, before seeing him again in the recent demo), and it seems both are as lost about what’s going on as players will be in the beginning of the game. As the two of them find themselves on a Halo ring occupied by the Banished, they – alongside the players – begin piecing together the story bit by bit. 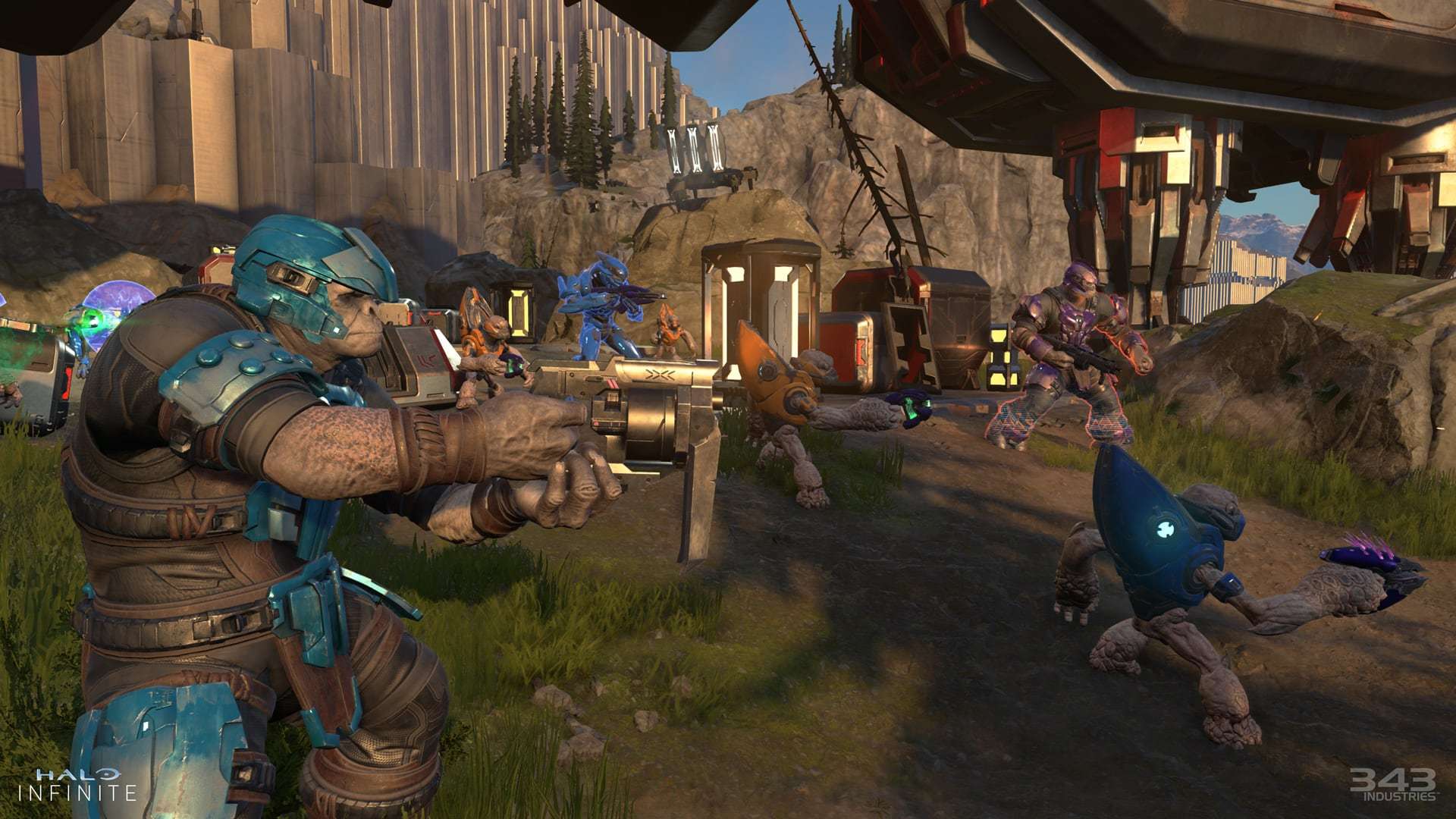 The primary antagonists in Halo Infinite are going to feel familia and fresh at the same time (on paper, at least). Those who’ve played Halo Wars 2 will be familiar with The Banished, a rogue faction that broke off from the Covenant. The Banished, being led by a War Chief named Escharum, now occupy a Halo ring, and based on his monologue at the end of the recent demo, it’s clear that he’s got a bit of a beef with Master Chief.

There’s mentions of one “Harbinger” as well, though there’s no telling who that might be referring to, while it’s also unclear exactly what happened to Atriox – the Brute warlord who led The Banished in Halo Wars 2. As far as the former is concerned, during an interview with VGC, associate creative director Paul Crocker said vaguely suggested that The Harbinger isn’t necessarily a guy, so… it’s Cortana, right? Yeah, it’s probably Cortana.

One thing that both Halo 4 and 5 have been criticized for very often is just how much required reading you need to have done in order to be able to properly understand their stories, or have any sort of investment in what’s going on. If you had those issues with Halo 4 and 5, or if you didn’t play them, or if you didn’t play Halo Wars 2, you might be worrying that Halo Infinite might fall into that same trap- but apparently, that’s a criticism of previous games that 343 Industries have tried to address in Halo Infinite. Speaking with IGN, Crocker said that though the game’s story will of course reward players who are deeply invested in the nitty-gritties of the larger Halo lore and narrative (, its story can still easily by understood by someone who’s never played Halo Wars 2 or read any of the novels or comics.

“We don’t want a game where players have to do homework to enjoy this game,” Crocker said. Studio head Chris Lee then added, “You don’t need to go through the whole franchise to learn and understand the fiction coming in, but if you do have that knowledge we want to reward that. You’ll see these [extended universe] elements and nostalgic moments. There have been a lot of goosebumps in the studio as we have [finished] different scenes and things that are in the game.”

With Halo 4, 343 Industries kicked off what’s come to be known as the Forerunners Saga. With Halo Infinite, that’s going to come to an end. 343 Industries have confirmed that the narrative that kicked off in 2011 will be wrapping up later this year- but at the same time, Halo Infinite will also be the beginning of something new. What the “something new” is remains nebulous for now, but it does lead us to our next talking point. 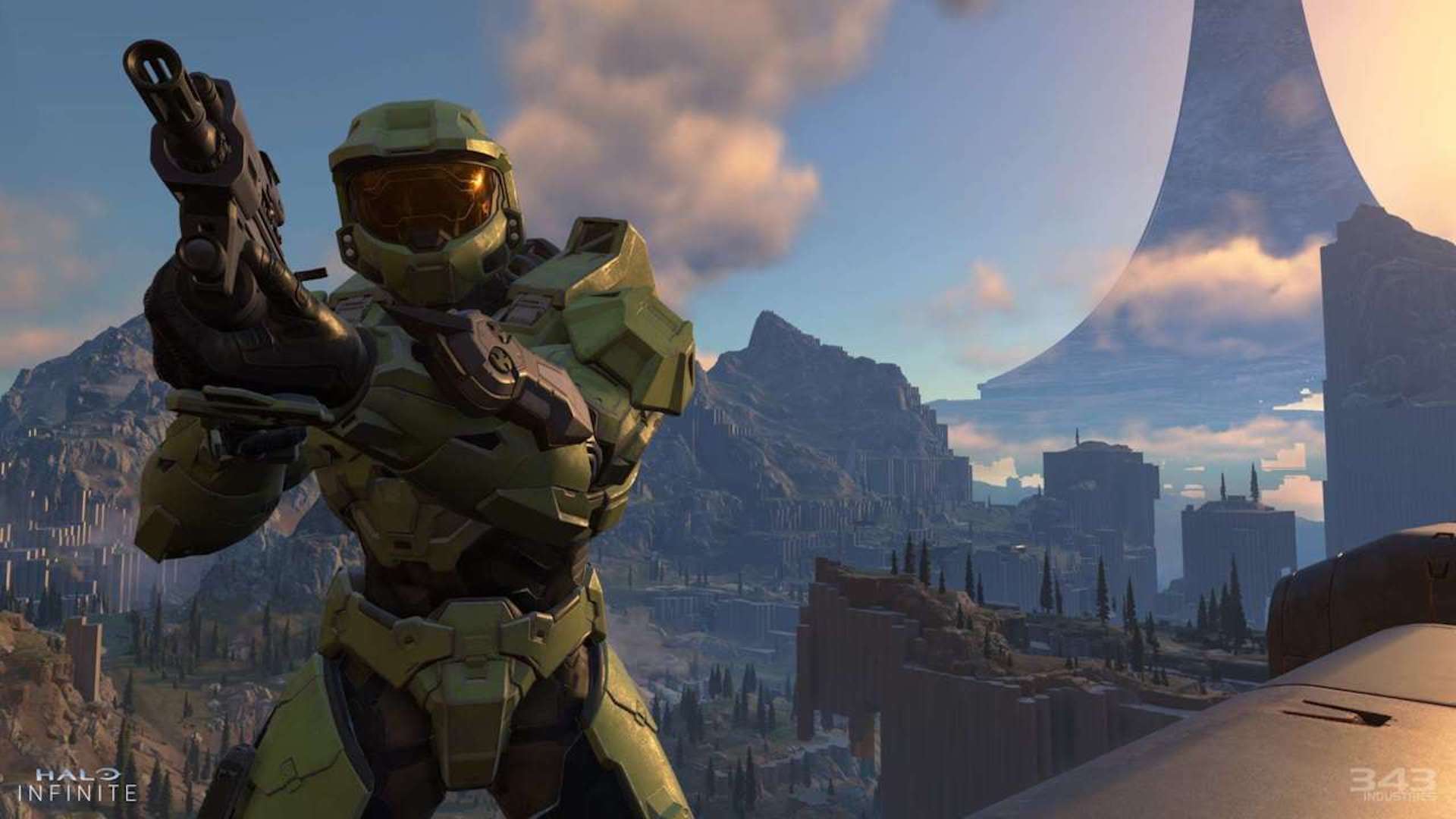 Halo Infinite is going to be the last Halo game for the foreseeable future, with 343 Industries confirming that it will serve as their platform for Halo for the next 10 years, in terms of both, multiplayer and telling new stories- which is another way of saying they’re developing it as a live service title. “It is the conclusion of events that have been set up in the past, but it is very forward-looking as well,” Crocker told IGN. “We want places to go and we want new mysteries.”

Meanwhile, speaking to VGC, Chris Lee said that more stories will be told through Halo Infinite in the future and will be added online, but details on those aren’t going to be shared for a while yet.

But we’ve said enough about the story. Let’s talk gameplay, shall we?

For a while now, leaks and rumours have suggested that Halo Infinite is going to take the series into the open world space, and that has now been confirmed. Infinite is, in 343 Industries’ words, the most expansive Halo campaign to date, to the extent that it is bigger than Halo 4 and 5 combined. Once you’re a few hours into the game, you’ll find yourself in an open world area (complete with a map and everything, which we saw in the demo), with side activities and missions to undertake, allowing Master Chief to get behind the wheel of a Warthog and explore to his heart’s content.

Speaking with VGC about the game’s open world, Crocker said, “We wanted to present an amazing ring for players to explore and bring back all those memories they had when they first played Halo all those years ago. We wanted to really focus on the wonder, mystery and the beauty of that space, and then drop in Chief as the universe’s greatest soldier going up against this dangerous enemy in the form of The Banished, and just allow that to flow over the player and give them this great experience.” 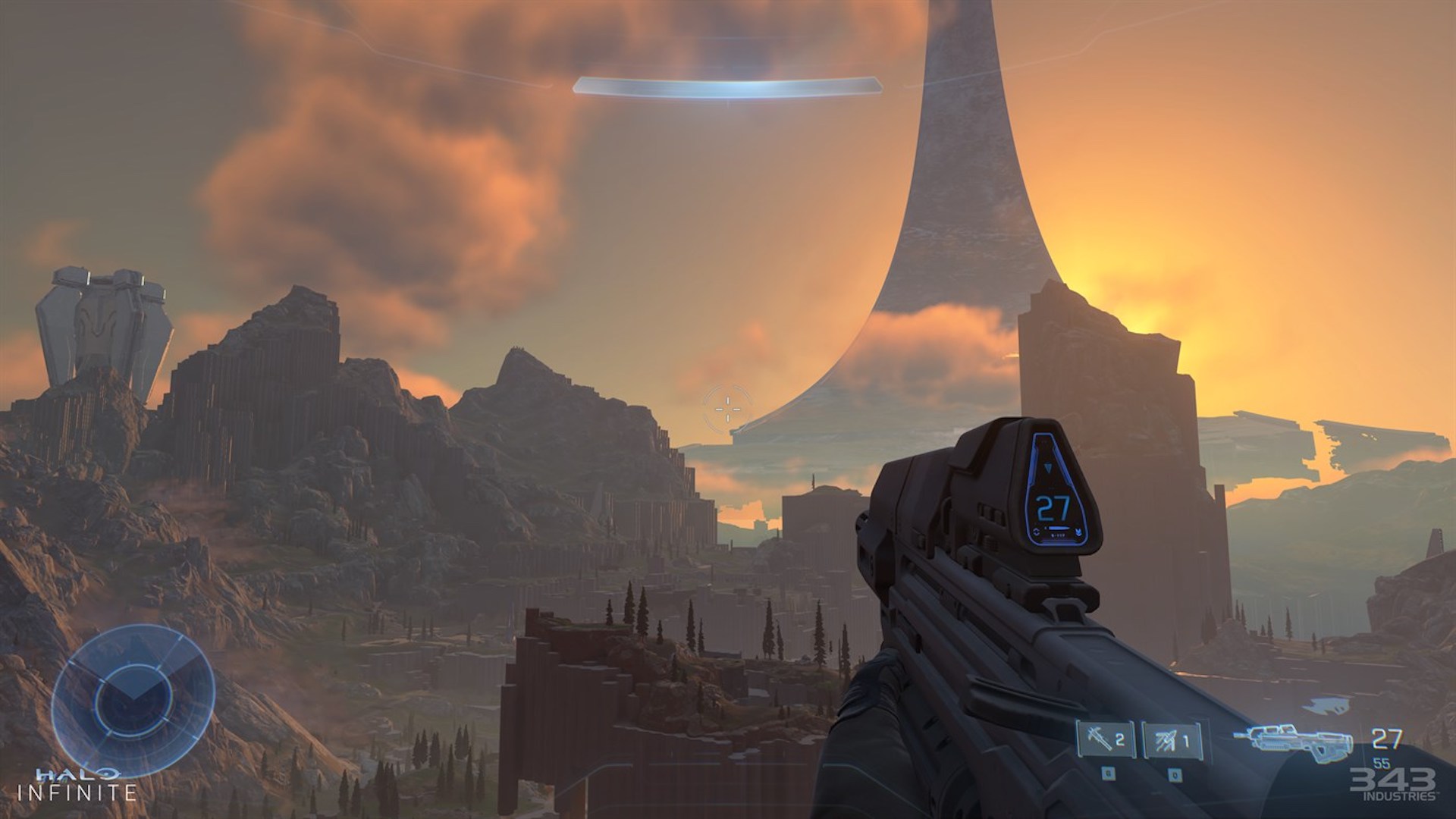 343 Industries are also adding some neat touches to Halo Infinite’s open world to help bring it to life. For starters, they’ve confirmed that the game has a full day/night cycle, which is neat- but how (or if) this will impact gameplay isn’t something they’ve commented on. Meanwhile, the Halo ring will also be populated by wildlife to help breathe more life into the environments- just don’t expect to have much interaction with the animals you come across.

You can’t pet the dog is what we’re saying. 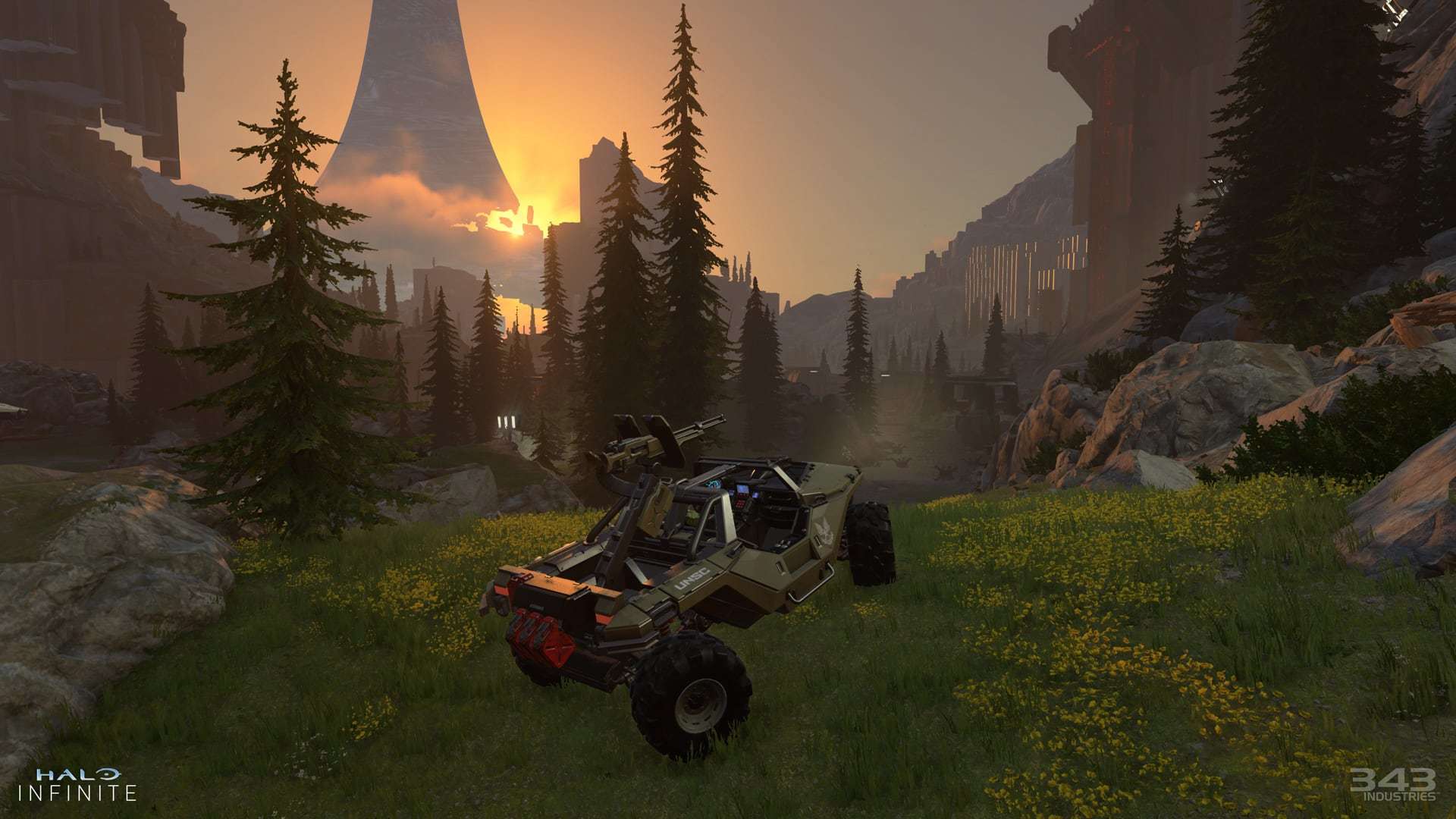 So what exactly will exploration in Halo Infinite entail? Well, the specifics remain unclear (again), and though more details on this aspect will probably be shared as we get closer to launch, the developers have shared a few tidbits about what players can expect. There’s unique equipment to hunt down, collectibles to find, and missions and side objectives to undertake. Driving the Warthog around will seemingly be your primary means of traversal, but it seems Master Chief can also use some new equipment, such as his new grappling hook, to get around areas.

Over the past few months, multiple leaks have mentioned that Halo Infinite will include a grappling hook, and that detail has now been officially confirmed. Called the Grapple Shot, it has plenty of interesting applications. You can use it to swing yourself across environments, you can target it at enemies to quickly pull yourself in their direction (and maybe even combine that with a crunching melee attack for a deadly blow, as we saw in the demo), while you can also pull explosive cannisters toward yourself and then throw them at enemies during combat.

And it’s not the only new piece of equipment being added in the game. 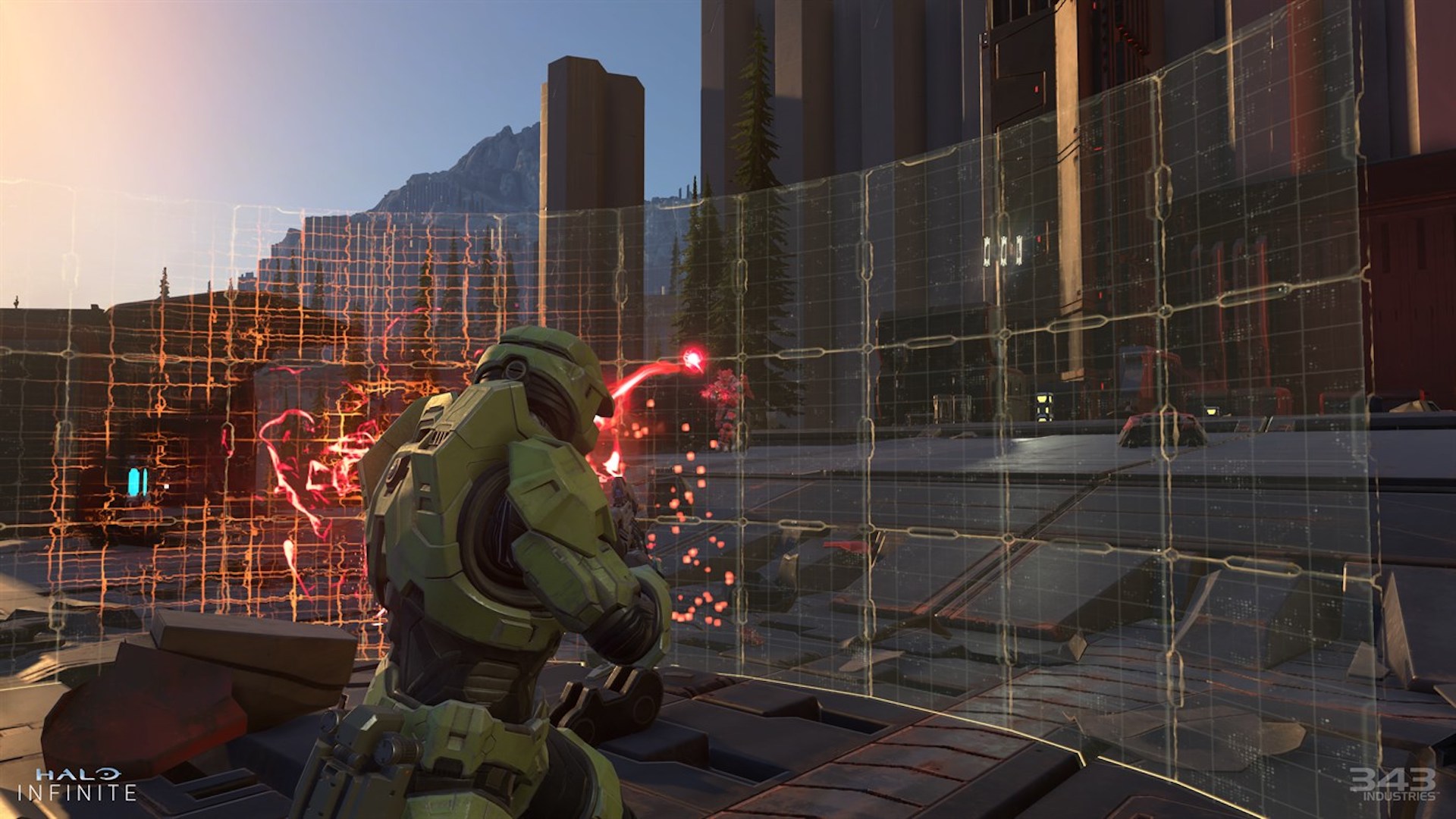 Other than the Grapple Shot, something else we saw during the recent demo that’s going to be new to the series (at least in this specific form) is the Drop Shield. That name is pretty self-explanatory- using this, Master Chief will be able to drop an energy shield in front of himself to block all incoming shots, while still being able to shoot at enemies from behind it. 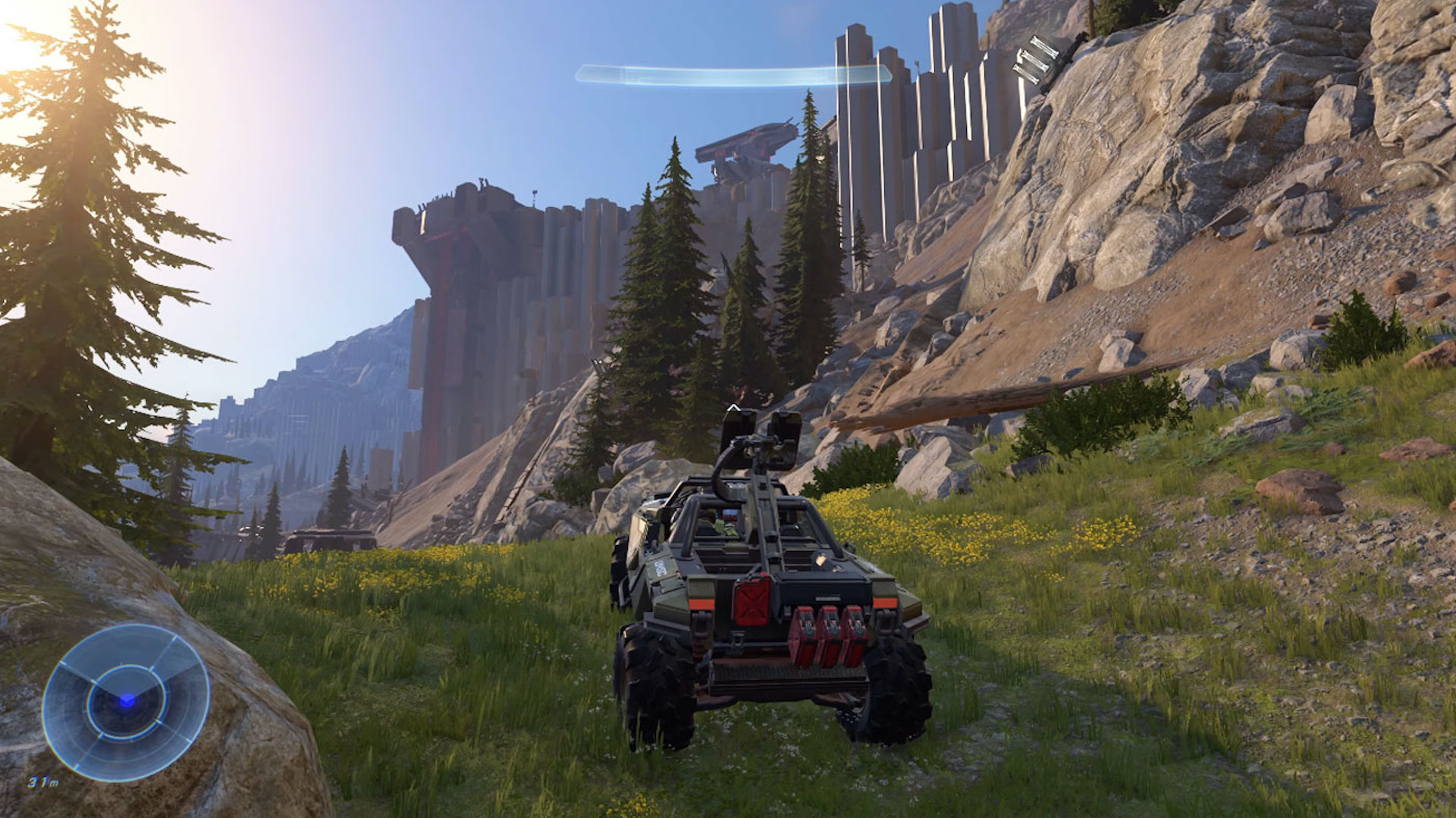 Weapon design and variety are a crucial part of any shooter, and that’s perhaps truer in Halo’s case than any other series out there. Thankfully, it’s not just new equipment that 343 Industries are introducing with Infinite. While many classic and fan-favourite weapons will, of course, be returning, there will be plenty of new ones as well.

Some of these have been revealed, courtesy of IGN. There’s a Banished three-round burst energy weapon called the Ravager; a Banished pistol that shoots kinetic projectiles to deal heavy damage, called the Mangler; a new UNSC riot shotgun called CQS48 Bulldog; a new full-auto UNSC rifle that’s good for mid-range combat, called VK78 Commando; and finally, the Pulse Carbine, which seems to be a new spin on the classic Covenant Carbine. 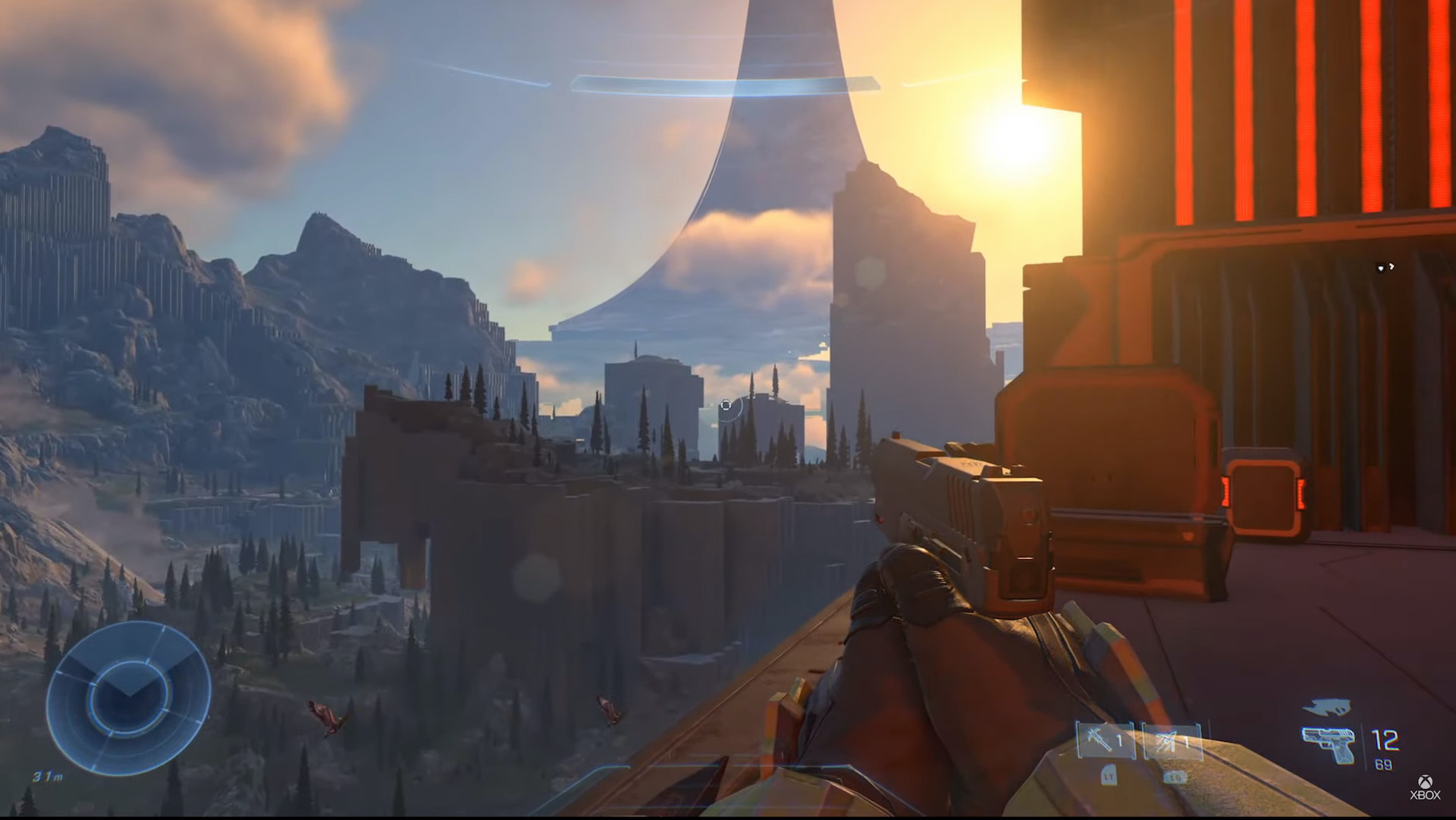 Interestingly enough, there’s also an upgrade system in Halo Infinite (we actually caught a brief glimpse of an Upgrades tab in the game’s menu during the recent demo). Don’t worry though- this doesn’t entail any RPG mechanics. There’s no upgradable gear, there are no skill trees, and given how constantly switching out, dropping, and picking up new weapons is the name of the game in Halo, there are no weapon upgrades either.

So what exactly does this entail? Well, the upgrades system ties into equipment that you’ll find by progressing in the story or by exploring the open world, such as the Grapple Shot or the Drop Shield. How extensive will the upgrades for this sort of equipment be? What will the nature of these upgrades be? How significantly will they impact gameplay? All of that remains to be seen.

NO RAY-TRACING AT LAUNCH

Given that Halo Infinite is the big flagship first party exclusive that the Xbox Series X is launching with, you’d expect it to fully leverage everything the newer console’s hardware can do- but apparently, that’s not going to be the case. For instance, at launch, the game won’t have ray-tracing, one of the many touted features of the Xbox Series X, though 343 Industries have confirmed (via IGN) that ray-tracing will be added to the game with a free update after release.

Given that Halo Infinite also has to run (and run well) on the significantly weaker Xbox One S, it’s not surprising that it’s not doing all it can with the Xbox Series X’s tech. We’re fans of the Halo art style, and always have been, but from a purely technical perspective, you shouldn’t expect this one to be a graphical showcase along the lines of other upcoming next-gen games like Resident Evil Village, Horizon Forbidden West, or Microsoft’s own Forza Motorsport.