UI Art Lead Chad Mirshak's profile might be suggesting that the upcoming shooter's Xbox One version has been cancelled.

Halo Infinite was supposed to have launched alongside the Xbox Series X/S’ launch this year as the flagship launch title of Xbox’s next generation, but Microsoft have also planned an Xbox One release for the shooter. However, it’s possible that the game’s last-gen version might no longer be part of the plan for Microsoft and 343 Industries.

Halo Infinite UI art lead Chad Mirshak at 343 Industries’ LinkedIn profile mentions that he is currently at work on the first person shooter, though interestingly enough, his profile only mentions the Xbox Series X/S and PC as the game’s platforms, with an Xbox One version missing. That does not have to mean anything, of course, and may as well just be a mistake, but with Microsoft having allowed 343 Industries another year of development, it’s possible that plans have internally changed in that time.

For what it’s worth, there were reports earlier in the year that suggested that Halo Infinite’s Xbox One version had been cancelled, which was followed promptly afterward by 343 Industries denying those reports.

In the absence of any announcements by the developer or publisher to the contrary, Halo Infinite is still scheduled for Xbox One alongside Xbox Series X/S and PC. It will release in Fall 2021. 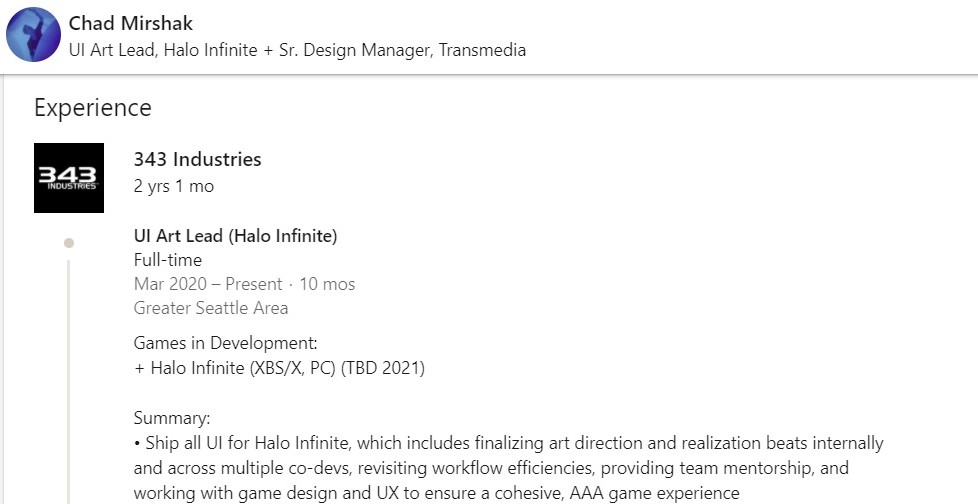