Halo Infinite is setting up a benchmark for ninth-gen graphics.

Halo is finally making a comeback. There was a period of time that the Halo franchise was the premiere console shooting experience. The first game was dubbed the “killer app” for the original Xbox, and Halo 3 remains one of the Xbox 360’s all-time bestsellers. With the advent of a whole generation of twitch shooters, the franchise lost its Xbox mascot status, at least in the public’s eye. And long-standing disputes between Bungie—the original developers—and Microsoft, saw the two part ways after the development of Halo: Reach. Halo 4, developed by 343 Industries was a surprising technical achievement on the Xbox 360, a last hurrah for the 7 year-old console in 2012.

But between the Master Chief Collection remasters, and the somewhat mediocre Halo 5: Guardians, it can feel like the franchise is a Microsoft flagship out of obligation at times. But Redmond, with the considerable amount of resources at their disposable, just won’t let it go. Next year’s Halo Infinite, scheduled to make an appearance on Xbox Scarlett, is bigger, better looking, and deeper in scale than anything we’ve seen from Halo so far. And it’s built on the all-new Slipspace engine. The new internals allow 343 Industries to deploy a whole range of next-gen tech and effects. We saw a tantalizing tech demo at E3 2018. This year’s E3 brought yet another glimpse of Halo: Infinite and Slipspace. The game’s a year from release but let’s take a deep dive and have a look at what’s going on under the hood with the new trailers.

Slipspace has been described by 343 Industries as the “biggest investment” the studio’s ever made. They were right on the mark with this statement. Every preceding Halo title was built on the creaking framework of Halo 2’s engine, with iterative improvements made to each outing. Slipspace is a big deal, not just because it’s a new engine. It’s a new engine built with Xbox Scarlett in mind. Next year’s Microsoft platforms boast better GPU performance than the Xbox One X.

But the real story’s Scarlett’s massively improved CPU prowess. It’s early days, but certain aspects of the Slipspace tech we’ve seen—such as the rhino horde—point to a deeper degree of simulation made possible by a faster CPU. Apart from this, Slipspace appears to push draw distances and LODs way out. Halo’s know for relatively linear sequences—the Infinite in the new game’s name could well hint at more open-ended level design. And we’d be amiss to ignore the massive overhaul to lighting tech. 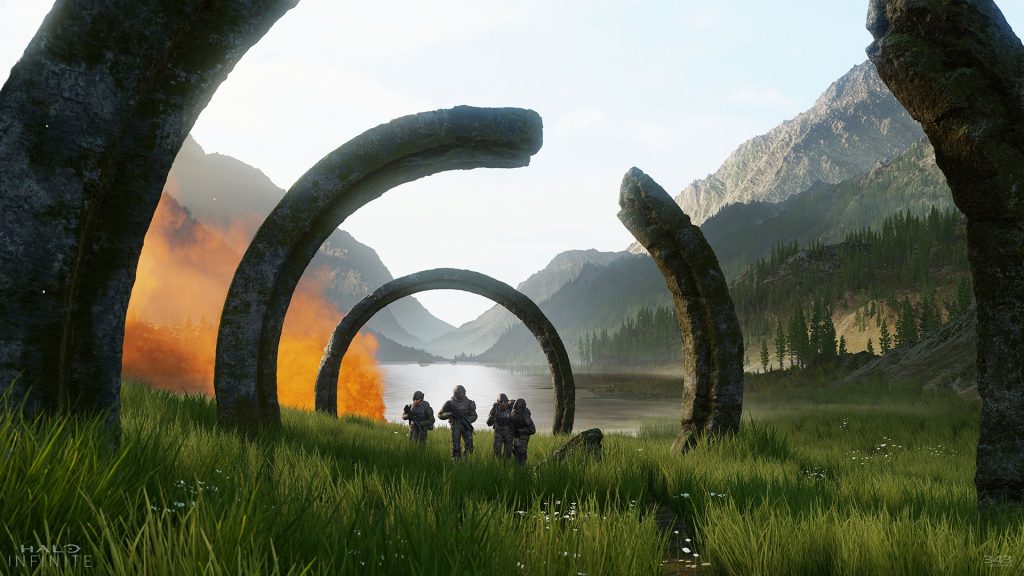 Earlier Halo titles used a hybrid deferred + forward renderer. This allowed for a reasonable number of dynamic lights—especially in the environment. But the majority of lighting remained baked and particle effects didn’t emit or receive light—making things like explosions and gunfire static. In the 2019 trailer, we see a radical overhaul to the lighting approach. Halo Infinite appears to be using a fully deferred solution, handling a large number of lights on-scene at a time. It’s particularly impressive how lighting from the alarm casts colored light on surfaces, with radiosity passing the reflected color on elsewhere. This is a huge improvement over Halo 5: Guardians. To hit a consistent 60 FPS, the latter game made a lot of visual compromises—dynamic lighting was one of these.

Physically based rendering is in full effect here. While the effect was introduced in Halo 5, 343’s artists evidently didn’t have the time to deploy a full-fledged implementation. Material rendering was of inconsistent quality, with PBR being deployed in certain areas, but not elsewhere. With Halo Infinite, we see fantastic material rendering quality across the board. 343 studios has had an entire generation to get their material rendering pipeline up to speed and the effort shows.

Everything from metals to clothing looks correct and physically accurate. Together with the very high texture resolution—4K texture assets are deployed to scale well on high-res displays—surfaces just look a whole lot more convincing than in previous games.

The per-scene polygon budget has gone up significantly. As a result, character models and environmental objects receive a steep increase to poly count. This is easily noticeable when observing the bearded marine—his face is organic, without blockiness.

And fine details, like the folds of leather on Master Chief’s gloves, are rendered as geometry and not a flat texture. Character rendering in particular benefits from the use of subsurface scattering, for more convincing, less “waxy” character skin. Model quality isn’t a massive leap ahead of what we’ve already seen this gen, but it’s of an impressive fidelity for a game that appears to be running at 60 FPS all the time.

The trailer’s frame rate deserves special mention and consideration. Even though we were shown a cinematic sequence, it appears to be running at a full, v-synced 60 frames per second, without frame drops. If the shipping game has a similar performance profile, it’d be very significant. Halo 5 managed to hit 60 FPS most of the time. But this was because it was built from the ground up to hit 60 FPS. The short 8.33 ms rendering budget per frame meant making some profound compromises, from dynamic resolution, to static lighting, to relatively low-quality materials. The need to hit 60 FPS at all times meant that Halo 5 ended up looking not much better than the 7th-gen Halo 4.

This is borne out by the fact that Halo 4 in the Master Chief Collection on Xbox One, with a boost to rendering resolution, stands on its own when set against its successor. With Scarlett, we have over twice the GPU power and several times the CPU power on tap for developers to leverage. One tantalizing possibility is the return of 60 FPS as a norm in games—Scarlett might have the resources to do 60 FPS at high resolutions, without having to make too many visual compromises. This is interesting because 60 FPS actually used to be the norm right up until the 6th-gen. Many titles on PS2 and older platforms ran at 60. For that matter, even Super Mario World on the SNES was a 60 FPS title.

From the 7th gen onwards, developers increasingly traded off framerate for rendering budgets. And no matter the quality of your motion blur, 30-FPS shooters are inherently compromised experiences. It speaks a lot to Scarlett’s hardware prowess if its able to hit 60 FPS, even in Halo Infinite’s cutscenes. It might make sense to avoid reading too much into the trailer’s framerate, though. 343’s been clear that they’re showing a target render and not actual game footage. While they’re evidently working towards making 60 FPS doable across the board, it’s quite possible that we might see compromises to either the visuals, the framerate, or both in the shipping product.

The post-process pipeline has always been an area of strength for the Halo franchise. Halo 3 infamously rendered at a sub-native resolution in order to feature more accurate 128x HDR. Looking at the latest footage, we see that Slipspace continues this tradition and deploys a wide range of high-quality post effects. Temporal anti-aliasing is being used here. There is a softness to the footage’s IQ, but this is a reasonable tradeoff for the excellent AA coverage, minimizing shimmering.

We see extensive use of Halo’s signature overwrought bloom lighting with the emergency alarm. This time, though, an enhanced lighting pipeline allows for light bouncing—this means that the overall effect isn’t as predicated on bloom itself as in earlier titles. We see a high quality bokeh depth of field effect in the closeups of the marine’s face. Dynamic DoF can be expensive to implement and it’s great to see this in place and running at 60 FPS. Halo 5 featured this effect, but it was limited to 30 FPS cutscenes. We’d be interested to see if dynamic DoF is implemented in actual gameplay conditions, too.

And lastly, the footage showcases excellent per-object motion blur, with a high sample count. Motion blur was often used in the 8th gen as a band-aid to mask the jankiness of a 30 FPS update. But here, we see a high quality implementation that’s running just fine at 60 FPS and delivering a remarkably smooth presentation. This calls into mind Marvel’s Avengers, another upcoming title where 60 FPS gameplay is combined with excellent motion blur to deliver exceptionally smooth action. 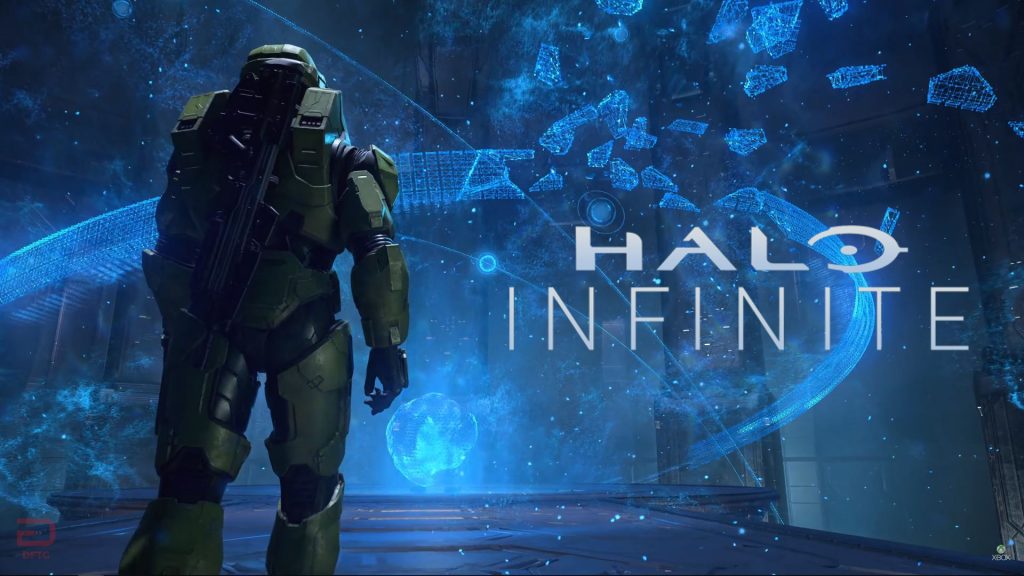 Slipspace was built from the ground up for Xbox Scarlett and this shows, from what we’ve seen so far. A massive improvement to lighting and material quality are our key takeaways from the Halo Infinite footage shown so far. But just as important is the fact that everything appears to be running at a locked 60 FPS. If this is a benchmark for 9th-gen visuals, we’ve got good times ahead of us.