Halo 3: ODST may have originally began as an expansion, but the final product in some ways surpasses its predecessor. This new take on the universe will push the escapades of the Master Chief to the back of your mind as you focus on all of the excellent content this game offers.

ODST features an entirely new storyline with all new characters and, for the first time in the franchise, an open world to explore. The game takes place in the city of New Mombosa. Most will remember the city as the location on Earth where Master Chief fought in Halo 2. You play as the rookie in a squad of ODSTs about to drop into New Mombosa to take out a covenant ship over the city. The mission goes south when the ship causes a slip space rupture in the city forcing you to be separated from your squad during the drop. You awake six hours after drop and must begin to piece together what happened to your squad mates.

The story is progressed by finding certain key items while playing as the Rookie. These items will trigger flashbacks allowing you to play as a member of your squad after the drop. The flashback sequences are usually filled with action in contrast to the Rookie’s more stealth oriented sequence. This allows the story to be told in an interesting way and does well to keep your thirst for covenant blood quenched. 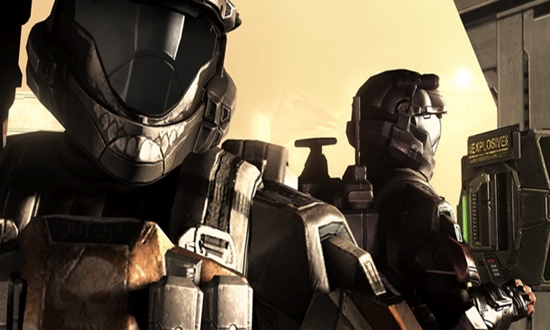 The Rookie’s nighttime sequences play out a bit differently. As stated earlier they rely more on stealth. You could easily pick a fight with a small group of covenant, but winning that fight is a different story. You must sometimes stick to the shadows to get past enemies or if nothing else to at least set yourself in the best position to attack. If used well it is an excellent new way to play the game.

The game features some other major gameplay tweaks. The most important tweak is the stamina bar. Being that you are not a Spartan you are lacking in the shield department. What you do have is a stamina bar, pretty much you can take a few hits with this then your health will begin to take damage. You’ll always want to be on the lookout for health packs during to more intense battles. Another tweak is the inclusion of the VISR (yes VISR, I guess removing the O makes it cooler and more ODST like). While it is essentially useless in the flashback missions due to the bright light, the VISR will probably always be on during the night missions. It is a low light vision mode that makes it easier to see enemies, weapons, health, scattered audio logs, and objectives. The A.I. in the game received a few improvements, but most of the time they are still as predictable as they were in Halo 3. Instead of Cortana you get to play around with New Mombasa’s superintendent. It too is an A.I. but it is not as intelligent as Cortana. It can guide you through the city by lighting up detour or keep right/left signs, but not much else. New variations of old weapons such as the silenced and scoped SMG as well as the Automag (a silenced and scoped magnum) add to the fun, however the Battle Rifle was removed from the game which may annoy those who always like to have one handy. ODSTs also lose the ability to dual wield.

Easily one of the games greatest strengths is Firefight. It is a very Halo take on the survival mode. Games are divided into Sets, rounds, and waves. Five waves make a round, three rounds make a set. Teams consist of up to two players on one Xbox or up to four through either system link or Xbox Live. You start with an SMG and Automag and seven lives, with that you must fight endless waves of covenant ranging from grunts to chieftains. At the beginning of each round a skull is activated (one of the same skulls found in Halo 3). With each progressing round a new skull is added to the mix. At the end of each round you gain lives based on how many players you have, up to four. At the end of each set you get to play a bonus round. In the bonus round you must achieve a certain score in 60 seconds by killing grunts. If you can reach that score you will gain extra lives. Easy right, well Bungie decided that during this bonus round that every skull should be activated. Essentially you will be constantly be bombarded by grenades from dozens of not so easy to kill grunts. Deaths won’t count against you, but each death means that many more grenades will be coming your way, ODSTs don’t like grenades. Firefight is tons of fun and will be the reason you keep coming back to play more ODST. You must truly work together as a squad in order to survive the later waves. If you have a good team then Firefight will be worth the game alone.

Marty O’Donnell has created what may be his best scores for ODST. The music drives the emotion of the game and really sets the mood. Playing ODST without the music would take a great deal from the game which says a great deal for his music. Unfortunately the games visuals did not fare as well as the music. While the engine shows some improvements, it is also beginning to show its age. At a time where more and more games are pushing the graphical limits of their console, ODST cannot stand out in that crowd. It’s not to say the game looks bad, but it looked better in 2007.

At the tail end of thing, but not to imply that it is unimportant is disc 2. Disc 2 features the entire Halo 3 multiplayer experience. There are three new maps, but only two of them are original. Heretic is a re-release of midship from Halo 2, while Citadel takes inspiration from the Halo 3 mission “The Covenant” and Longshore is based on a port in Old Mombasa. If you loved Halo 3’s multiplayer then you will use disc 2 quite a bit, those who didn’t won’t find anything to change their mind. Not having any sort of ODST based competitive multiplayer seems like a missed opportunity, but being that Halo 3 is still the most played online game the 360 has, it’s a lot better than nothing at all.

Of all the things Bungie did right in ODST, the most important is the characters. Sure the Master Chief is a great guy, but players who appreciate the story will come to care about the squad and its struggles. This emotional connection makes the story as strong as it is and makes it the best story they have told. ODST is the pinnacle of story telling in a Halo game. All in all ODST is a game that no Halo fan should miss.

Story is great and is told very well. Firefight is a lot of fun. Minor A.I. tweaks make enemies slightly more intelligent than past Halo games. ODSTs are awesome. Amazing music. Three new maps for Halo 3 on the second disc. Halo Reach beta with each copy of the game.

Co-op makes the game way to easy. Game engine starting to show its age. Not very challenging for the Halo elite. Recycled Multiplayer.

Final Verdict:
EDITOR’S CHOICE
ODST is a breath of fresh air for the franchise and a must have for Halo fans.
A copy of this game was provided by Developer/Publisher/Distributor/PR Agency for review purposes. Click here to know more about our Reviews Policy.