Posted By Rashid Sayed | On 24th, Mar. 2010 Under News | Follow This Author @GamingBoltTweet

It’s been exactly 5 years since Sony launched the PlayStation Portable. Since then, Sony’s hand held has seen many ups and downs.  March 24th, 2005 was the day when the PSP was launched and since then it has sold close to 60 million units worldwide. So what did Sony had to say about this achievement? Over at the official PlayStation Blog , John Koller, the Director of hardware marketing had the following to say:

“March 24, 2005 will always be known in PlayStation history as the day we debuted the PSP systemin North America. At midnight launches across the country, hundreds of you waited with great anticipation in lines at local retail stores for the PSP system. With its best-in-class, 4.3 inch high-resolution LCD display, vast library of software titles and built-in wireless communications, the PSP system was the first integrated handheld entertainment system to introduce console-quality gaming and comprehensive entertainment capabilities to the portable market. Half a decade later, PSP is still going strong and continues to provide the best portable gaming experience and offer incredible value to consumers.” 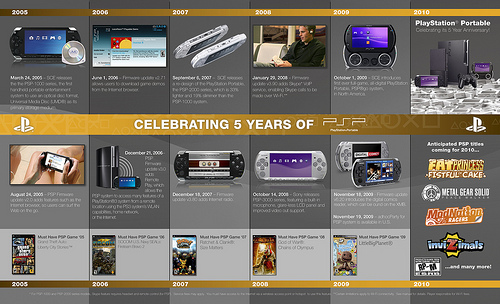 “With more than 520 PSP software titles, Gran Turismo,LittleBigPlanet, Resistance: Retribution, and SOCOM: Fireteam Bravo as well as more than 20,000 movies and TV episodes, “minis,” digital comics, original programming, and more than 300 games available on the PlayStation Network, it’s easy to understand why you have grown to love your PSP.”

“The PSP platform has seen tremendous growth in the last five years and we have you to thank. We’re extremely grateful for your enthusiasm and feedback because without it, the PSP system wouldn’t be what it is today. We look forward to providing you with more great content and many more years of portable entertainment in 2010 and beyond.”