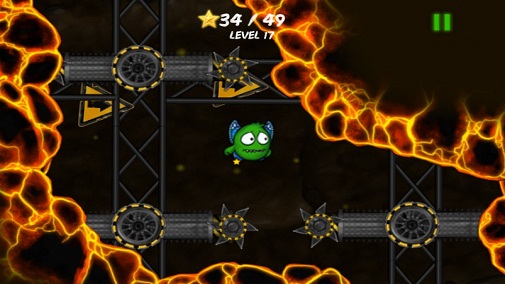 Harry the Fairy is about a fairy named Harry… ha! Go on repeat that fast, it’s a tongue twister indeed. So it’s about this fairy who needs to rescue his friends by travelling to unique looking locations, avoiding obstacles and then its upto you to score well by collecting all the stars and clearing the level fast. Why? Because its a Chillingo game, that’s why.

Visually, the game looks great, but it is also depressing in a way when you look at some of the environments and Harry’s facial expressions. As you can see in these images, he sort of makes a cute face. Most of these environments are located underground, so sometimes it can seem a little repetitive but the general art design is quite good. 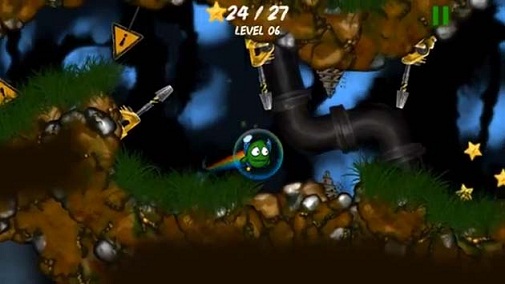 Now, when it comes to controls and that’s where I tend to dislike most of these iOS games, I have to say it’s pretty good. You have two options to control Harry – either by using the tilt function or by using the virtual buttons on your iOS device. I’d gladly take the tilt controls. After playing Temple Run for so many times, I feel that is the best way to play most iOS games.

The obstacles are provided in the game to give you some sort of a challenge, but it is pretty easy and you will clear most levels in no time. Toxicity and Drills can make short work of you, so you need to be careful. I absolutely hate the lava levels though. You can also interact with the environment and can also pull levers or push around barrels to achieve your goal. 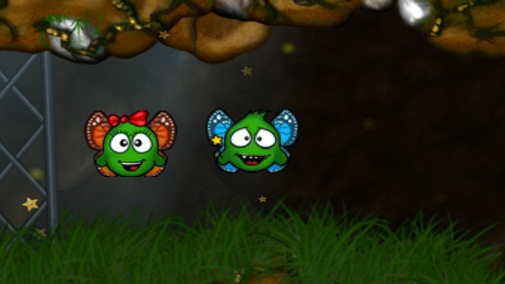 There are only four unique areas in the game, but you have the option of playing through 28 stages, which makes the game quite lengthy indeed. I would have expected this game to push the envelope a lot higher considering it was such an interesting concept, compared to the other iOS games we usually receive, but the game is quite meek and unchallenging.

Harry the Fairy is an interesting game, although, it doesn’t really ooze creativity and is quite repetitive from time to time. There are a lot of stages but the four locations is quite disappointing; I would have preferred more, but for the price charged I think its a bit decent. I can see this game being fun on occasions, but its not really something I would recommend to play for a long time.

Interesting concept. Decent price. Is fun for a while. The visuals are great. Good controls

Repetitive. Less stages. The game is too easy.

Final Verdict:
FAIR
Harry the Fairy is an interesting game, although, it doesn't really ooze creativity and is quite repetitive from time to time.
A copy of this game was provided by Developer/Publisher/Distributor/PR Agency for review purposes. Click here to know more about our Reviews Policy.