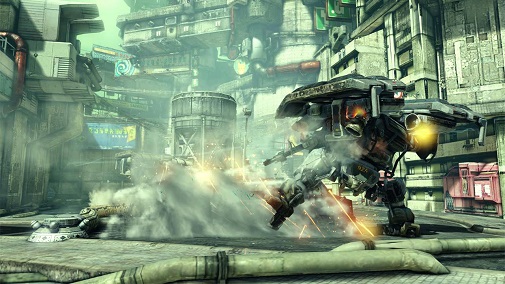 The ground trembles as giant mechs are marching across North America to spread the joy of HAWKEN. Meteor Entertainment and Adhesive Games, along with industry leaders such as ASUS, Logitech, and Machinima will be setting up HAWKEN matches at various booths at PAX East and GDC. Various merchandise will also be on sale at these venues.

Those who visit the Meteor Entertainment booth 1080 at PAX East will find themselves overwhelmed with a impressive setup that include:

Attendees will also be able to play the game at various other boots from third parties, including: Asus in booth 762, Logitech in booth 1056, Machinima in booths 613 & 712, Gunnar in booth 374, and finally NVIDIA in booth 862.

PAX East ain’t the end of the road. The mechs will be making its way to the Moscone Center in San Francisco for GDC, where the game will be playable at Kiosks 18 and 47. HAWKEN is also one of the few games to be awarded the coveted “Best in Play” award at GDC.

Mark Long, CEO of Meteor Entertainment will be discussing the topic  of launching Games in emerging markets at the Rixty Panel which will be held at at 11AM in Room 3018 in the West Hall on Thursday. So be sure to pay that panel a visit if you’re on the show floor.

If for some reason you’ve been living under a rock  for the past year and haven’t heard of Hawken, then you’ve been missing out on one of the best free to play games to ever come out of the incubator. HAWKEN is a multiplayer mech combat game which features some of the most frantic action in the multiplayer arena. It’s  developed by indie developer Adhesive Games who has done a stupendous job so far. And despite being a indie game, HAWKEN boasts visuals that put most AAA releases of today to shame. It’s currently in Open Beta and if you’re even remotely interested in the notions of giant robots beating the scrap out of each other, then you need to look it up.