Hitman Episode One: Paris Review – Return To The Roots

The first episode combines the best from Blood Money and Absolution to deliver a satisfying experience.

It’s been over three years since we’ve stepped foot into the world of Absolution — a game brimming with excellent stealth, clever fighting and shooting mechanics, breathtaking graphics, and deep story elements — and in that time IO Interactive and Square Enix have finally brought another massive installation in the original Hitman franchise. Well, “massive” if you wait for the entire season to come out; but until then we get the first, bite-sized piece of a much larger picture and very beautifully rendered episodic AAA game. A path Square Enix seems to be embracing more and more these days. However, the word “episodic” should not equate to a negative response in every scenario. Here, we have Hitman for PC, PS4, and Xbox One trying to prove just that with its big name publisher and an established franchise that is loved by millions.

Hitman establishes itself within the first hour that it is not a stereotypical episodic game from the likes of Telltale Games in which only a handful of events are established and has little to no replay value. This version is packed with replayability right from the start of the initial play through till you finish it. This is a great start for a first time episode, but let’s not get too far ahead of ourselves, the game however lacks in a few ways.

Hitman opens in a very impromptu manor. A short opening cinematic of Agent 47 joining the International Contract Agency (ICA) and then going right into training scenarios that really give the initial feel of the entire first episode. Scenarios are somewhat comical as scenes and are completely “built” for Agent 47 to take advantage of, including the wooden, nailed together helicopter for scenery. These scenarios that often play out similarly in Paris are stagnant, foreshadowing reminders of the AI that will be faced and the character’s ability to do little else than stand, sit, stare, chase, warn, and eventually shoot if the threat level gets too high. These mundane characteristics in these dull AI presentations should have felt as real as they looked. And yes, that was a compliment on the graphics within Hitman.

"Hitman establishes itself within the first hour that it is not a stereotypical episodic game from the likes of Telltale Games in which only a handful of events are established and has little to no replay value."

Moving into graphics, Hitman offers a brilliant, breathtaking game that eclipses a lot of games on a much higher budget by today’s standards in gaming. Though the AI is stiff and heavily filtered to do nothing more than what they are programmed for, environment details and image quality are amazing. There’s nothing like going into a game where the location is big and beautiful. When you see little additions such as dirty marble floors and melting candles it gives that ambient feeling of life.

The controls within Hitman work well, but are stiff, take practice and I wouldn’t consider them friendly to new users of the franchise. For those who associate specific buttons with minor variations on what functions usually go where on the controllers, Hitman sort of flips those around. However after learning the controls, they work flawlessly and feel very responsive.

Killing. You heard right. Hitman is a game of little regrets from the developers as they bring the power of killing to the forefront of the franchise over story this time around. You won’t find a ton of story and overly long cut scenes within this episodic stealth game. Killing the target is what the main focus is this time around and it never felt better. The game doesn’t just assign a character to be killed, let you run in, then shoot. The world is shaped around said targets. Mini scenarios, complex challenges, and fun path finding are very rewarding ways to get from the starting point to the end assassination. Figuring out just how to get there is the main challenge, be it several different disguises, sneaking around massive environments, grabbing specific items that will help advance your character, etc. These challenging scenarios bring out an urge that really makes you want to replay these areas and figure out different ways to go about them. 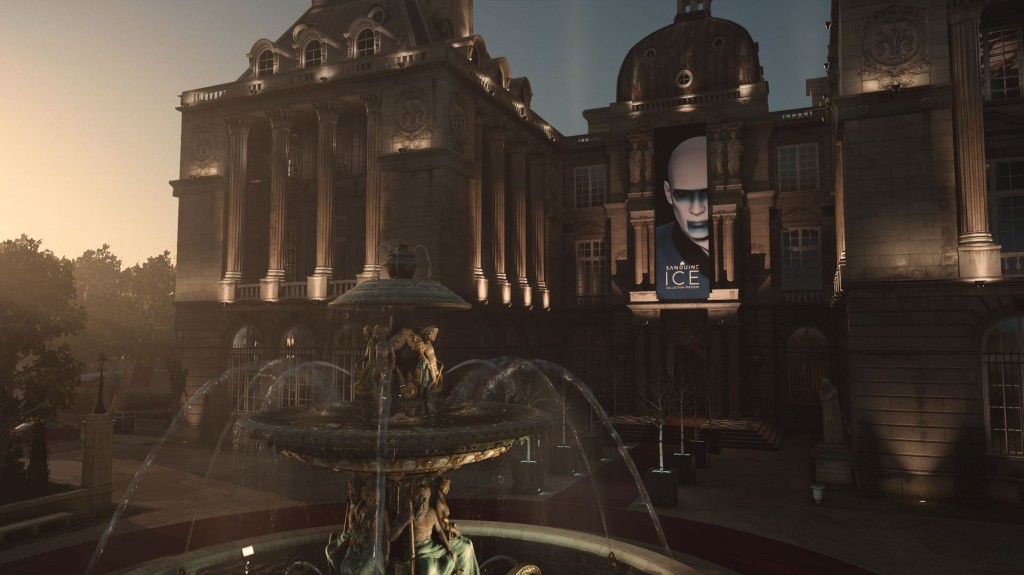 "Killing. You heard right. Hitman is a game of little regrets from the developers as they bring the power of killing to the forefront of the franchise over story this time around."

Overall, Hitman is a great start to a AAA episodic game in a very beloved franchise. The AI is stiff, it can be overly useless and lack any real depth, the controls need some real getting used to for those who often play games with the same controller layout, and it lacks any substantial story. But the realistic and larger than life world, the layout and design, the engrossing, lived in strength this game brings along with vibrant stealth mechanics is what really helps hold it together. It’s far from perfect, but as an opening chapter in what is sure to become a largely overarching and encompassing world, the next entry will hopefully impress.

Beautiful and massive level. Assassination scenarios and how to go about them are fun. Fun killing is the main focus over story.

Final Verdict:
GREAT
Hitman's season premiere is a nice opening act that's centers around a luxurious world that feels authentic. If you can overlook the stagnant, often useless AI and enjoy the real fun of figuring out how to get to the kill, you'll have a great time.
A copy of this game was provided by Developer/Publisher/Distributor/PR Agency for review purposes. Click here to know more about our Reviews Policy.