An in-depth look at Horizon Zero Dawn on the PS4 Pro.

Horizon Zero Dawn is the new in-thing from Killzone developers Guerrilla Games. As a PlayStation exclusive, Horizon: Zero Dawn is free from the technical constraints imposed by multi-plats. Guerrilla’s no stranger to PlayStation exclusives, having developed Killzone 2 and 3, among the finest-looking console games of the last generation. Likewise, Killzone: Shadowfall, the series’ first eighth-gen entry, featured the kind of revelatory visuals that gave console owners a legitimate reason to buy the PlayStation 4 at launch.

Guerrilla are experts at eking the very best out of platform exclusives. Killzone: Mercenary on the PlayStation Vita retained a remarkable amount of Killzone’s signature design, all the while running on what’s the equivalent of today’s mid-range smartphone hardware. With the PlayStation 4 Pro and massively upgraded GPU power to look forward to, just how far will Guerrilla push the visual envelope with Horizon: Zero Dawn? Let’s have a look at the game’s latest gameplay trailer and find out. We’re going in more or less chronological order, picking out key visual elements as the trailer progresses.

Check out the video above for the complete breakdown of the gameplay footage or read further with time-stamps for the video below.

The PS4 Pro version runs at a higher resolution

Well, duh. That’s kinda the point of the PS4 Pro. Peevishness aside, increased resolution is the most palpable difference between the PS4 Pro and PS4 versions of Horizon: Zero Dawn (as the trailer very obviously points out at 0:02). While creating richer 1080p experiences is certainly an option for developers to consider, it appears that Guerrilla have taken the easier route here: outside of resolution, visual quality should be a match between the PS4 and PS4 Pro version. At 1080p, the PS4 Pro will implement supersampling AA, which should clean up any stray jaggies that Horizon’s post-process AA implementation misses, but apart from that, and a “smoother framerate,” there won’t be many substantial visual differences. This is understandable, considering just how far along development on Horizon: Zero Dawn had come by the time the PS4 Pro was announced. Also note that the game won’t be rendering at native 4K, which as we’ve said earlier, is really beyond the scope of the PS4 Pro’s capabilities. How well Guerrilla’s upscaling technique pans out remains to be seen.

Much has been made about the PS4 Pro’s HDR capabilities, and Horizon: Zero Dawn is set to be a showcase for 4K HDR gaming. If you have a TV that supports HDR, that is. HDR is a technique that massively increases the dynamic range–the contrast difference between the brightest whites in an image and the deepest blacks. A greater range will more accurately simulate how we perceive the real world. With its lush, sunlit environment, featuring extensive interplay between light and shadow in the jungle, Horizon: Zero Dawn is an ideal case for HDR gaming. According to Guerrilla, HDR is particularly suited to enhancing the appeal of Horizon’s sky lighting, with the deep blue contrasting well with the lush foliage below. Fortunately, original PS4 owners won’t be left behind in this respect: Sony patched in HDR support for the older console and while Guerrilla mentioned that the specific technique used will differ, the original PS4 will also benefit from HDR in-game, assuming you’re hooked up to an HDR display. The sun-drenched opening of the trailer (particularly at 0:35) is an excellent case for the kind of impact HDR will make in Horizon: Zero Dawn.

In the past, we’ve seen hair in games becoming increasingly dynamic. Soft-body physics, for accurately representing the physical interactions of soft bodies like cloth, hair, and foliage, is notorious for being computationally expensive. It’s why most seventh-gen protagonists have their hair stuck to their scalps with Gorilla hair gel. It’s also why capes were something of a rarity, and why trees didn’t sway during storms.

Thankfully, the PlayStation 4 and the PS4 Pro offer enough headroom for Horizon: Zero Dawn to feature  a dynamic, bespoke soft-body physics implementation. (At 0:19) We see Aloy’s hair flutter in the wind. While the effect isn’t quite as arresting as Hairworks in The Witcher  3, using thick strands here for hair lessens the performance impact, as well as keeping things lore-friendly–cave-people, even the post-apocalyptic variety, tend to sport matted dreadlock. Far Cry: Primal’s a case in point. (At 0:26) Nearby foliage reacts to the wind. Unfortunately, player interactivity with foliage appears to be rather limited. At 1:41, Aloy runs rights through a leafy plant. While this is largely par for course, we’d point out that Assassin’s Creed IV featured lush greenery that interacted to player movement. Heck, even Far Cry 2 did it back in the day.

Horizon: Zero Dawn appears to make use of a deferred renderer, with nearly every object casting accurate shadows onto the ground, and onto other objects. At 0:26, observe the tree shadows cast on ground-level foliage. While there aren’t a lot of light sources apart from the sun, considering the largely outdoor environment, the upside of using a deferred renderer is accurate, per-object shadowing that can make for dramatic contrast at different times of day. Horizon also features an ambient occlusion implementation for indirect shadowing, visible at 0:38, though we see a bit of haloing around the leafy overhang in the foreground. At 2:13, we also see subtle use of screen-space reflections, with the metal platform atop the robot reflecting the jungle below.

Taking advantage of the large pool of VRAM on-board the PS4 and the PS4 Pro, Guerrilla have been able to make use of high-res textures that bring out a good deal of fine detail. This is the key area where the resolution differential between the PS4 Pro and the PS4 counts: at “4K,” the PS4 Pro will be able to resolve far finer detail from further out–for instance, the stippled mesh pattern on the robot at 1:53–than the older console. As a gameplay trailer for a third-person title, there isn’t much in the way of close-up shots here. However, foliage texture quality is exceptional at 2:51. Moreover, earlier glimpses of the game, particularly its E3 trailer, have shown remarkable texture fidelity up close. 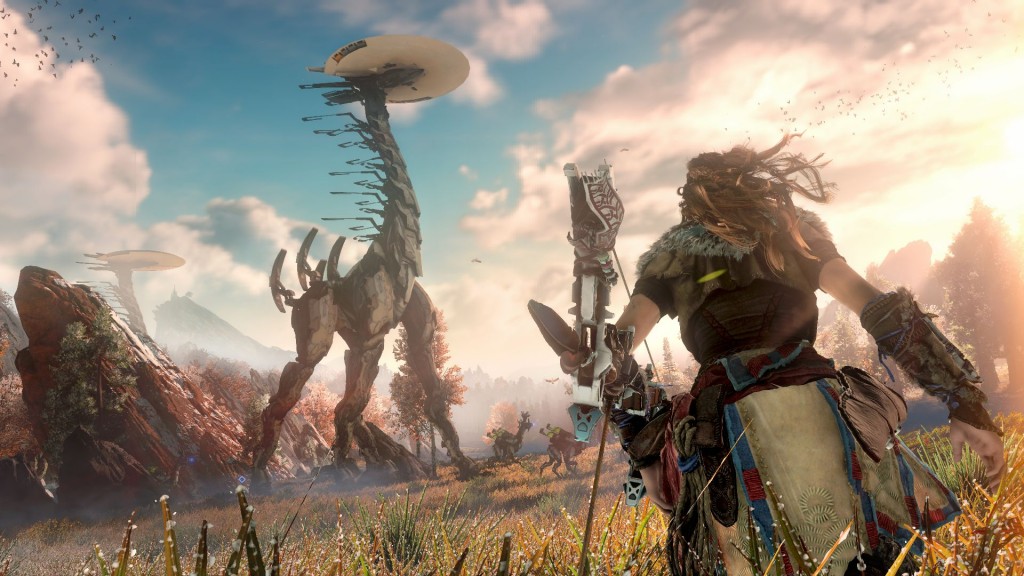 Depth of Field and Motion Blur

Whether or not you like the use of depth of field and motion blur in games is largely a matter of personal preference. Nevertheless, Horizon: Zero Dawn appears to feature a very competent per-object motion blur implementation. This is evident from Aloy’s arm at 1:20 as she sprints towards the robot. Horizon also makes use of a rather subtle depth of field implementation, which is most visible during canned sequences, as at 2:19.

Unsurprisingly for an eighth-gen exclusive, Horizon: Zero Dawn makes use of very detailed, hi-poly meshes for characters, enemies and the environment. According to Mathijs De Jonge, Horizon’s director, the Thunderjaw alone is made up of 550,000 polygons. A high poly-count allows for convincing, organic shapes: the ridges on the date-palm at 0:32 are real geometry. Tessellation also appears to be deployed here: this is especially noticeable at around 2:57. The robot leaves irregularly-shaped footprints that are elevated and receive shadowing.

All in all, Horizon: Zero Dawn is looking to be one of the most visually compelling games on PlayStation. 4K and HDR offer plenty of reason to experience the game on the PS4 Pro. What’s your take?