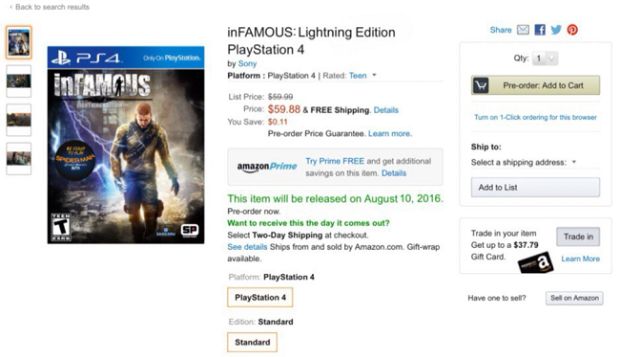 Update: According to PushSquare, this listing is false. However we have no way to verify this report so take this report with a grain of salt. It’s been long rumored that Sucker Punch is working on an open world game; in fact one of their job listing suggest that they are looking for candidates who have a “strong understanding of the history of costume design.” Although this listing may be false, a Spider-man game from Sucker Punch cannot be ruled out.

The season of remakes and remasters continues to roll on as a recent Amazon listing indicates that a PS4 remaster of the inFamous series is on its way.

Sucker Punch Productions is apparently working inFamous: Lightning Edition, which will be releasing on August 10th for the PS4. The pre-order price is $60 and it’s likely to include both inFamous games. Even more interesting is that the Lightning Edition will come with a demo for the next Spider-Man game, rumoured to be in development for the PS4 by Sucker Punch.

At this point, neither the new Spider-Man game nor inFamous: Lightning Edition has been confirmed by Sony or Sucker Punch. At this rate it seems likely that an inFamous collection of remastered PS3 titles comes to the PS4. All that’s left to do is wait.

Would you pick up remasters for the first two games on PS4? Let us know your thoughts in the comments below.