Interview With IDC Analyst Lewis Ward About The Future of VR, Next Gen, and More

IDC’s Research Director for Gaming and VR/AR, Lewis Ward, talks to GamingBolt about everything from VR to when he thinks next gen is coming.

Posted By Shubhankar Parijat | On 15th, Jan. 2019 Under Article, Interviews

With the industry moving into a time of transition, as we not only wait with bated for information on the next generation of consoles, but also to see how potential technologies like cloud gaming and virtual reality shape up, conversations about the future have become more pertinent than ever. Recently, GamingBolt sent across a few questions about everything from the future of VR to the growth of the cloud, and much more to IDC’s Research Director for Gaming and VR/AR, Lewis Ward- read our conversation below.

"I think that by 2021 several technical and business model barriers to cloud-streamed game services will have come down far enough that there will be millions of gamers around the globe accessing these services at least monthly on one screen or another to which they have access."

Given the greater push we’ve been seeing for cloud technology from the likes of Microsoft, EA, Google, and, to an extent, Sony, do you think this is something that has a large potential for the industry in the near future – maybe even as early as the coming generation – or do you think it’s more about laying down the foundation for something that is still a ways off yet?

I think that by 2021 several technical and business model barriers to cloud-streamed game services will have come down far enough that there will be millions of gamers around the globe accessing these services at least monthly on one screen or another to which they have access. Given that there will be well over two billion monthly gamers at that point, however, cloud-streamed gaming services will represent a low single-digital share of global game-related spending.

The PS4 and the Xbox One have both been selling strongly even five years intro their life cycle- is there any particular reason for that in your view? Do you think that factors such as mid-generation hardware refreshes or even extremely popular games such as Fortnite are responsible? Or is it just that traditional console life cycles are getting longer and longer- since the previous generation also lasted relatively longer than the one before that.

I think Sony and Microsoft have done a good job managing their overall console ecosystems. It’s a mixture of factors such as hardware bundle price and relative market positioning, exclusive games and specially-themed bundles, and a steady drumbeat of popular third party titles. It’s also the case that PS4 in particular has made significant headway this generation in several countries that you wouldn’t normally think of as console markets, such as China and Russia. In the U.S., we recently asked the reasons gamers were likely to buy a new console bundle before the end of this year. A slide from this deck is below and gets at what I mean. Most people have several factors that go into a new console buying decision, and these vary by platform. 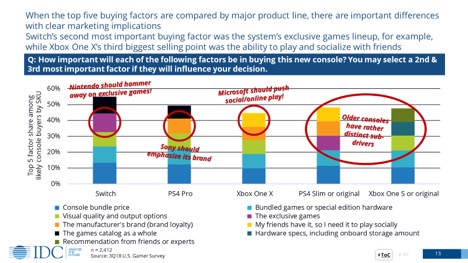 "My model currently projects both consoles will debut in 2021, a year later than many analysts seem to think. What happens to sales in 2019 will likely determine who is right, and narrow the launch window for next-gen consoles."

Speaking of hardware revisions, how likely do you think it is that Nintendo announces one for the Switch in 2019?

Yes, I think it’s clear that 2019 will see a Switch refresh.

Do you see consoles opting to go fully discless in the near future?

No, my research shows that console game-related spending will tip over 50% digital for the first time in 2019 or 2020 globally, but jettisoning discs entirely in the near-term would be a major mistake.

Do you think Microsoft will launch its next console before the PS5?

I’m not sure. My model currently projects both consoles will debut in 2021, a year later than many analysts seem to think. What happens to sales in 2019 will likely determine who is right, and narrow the launch window for next-gen consoles.

Many are saying that 2019 is too early for releasing PS5 and next Xbox. Do you think this could happen?

No, I don’t. Why would Sony skip E3 and then launch a new console shortly afterward that with little buildup? It ain’t gonna happen.

What are your views on Sony’s decision to skip E3 2019? Do you think that would have been the perfect time for them to talk about the PS5?

Not if 2019 gets a modest hardware refresh, as I expect from Microsoft and Sony, and sees a middle-of-the-road slate of AAA exclusives. If the plan is to give this assumed hardware refresh two years of runway before next-gen systems arrive, then 2020’s E3 is when Sony and Microsoft will be unveiling their new systems.

"I don’t think we’ll see a next-gen Nintendo console until 2023, and a lot things will change in five years, but at this point it hard to argue with success."

With the way VR has progressed over the last couple of years – especially this year with the likes of Astro Bot, Beat Saber, Firewall, and Tetris Effect – how much growth do you see for it in the coming years? Do you think the next generation of consoles will have an even greater focus on virtual reality?

Yes, I think Sony’s in it for the long haul. Microsoft wants to be more of enabler for other Win10-based hardware and software providers. There’s no reason Xbox One X can’t play Windows Mixed Reality games right now. I’m not sure why Microsoft hasn’t pulled that trigger on that, but they’ll very likely be in this space with their next-gen console. The bottom line is that while a lot of people are still down on VR, I expect 2018 global spending on off-the-shelf software, which is primarily games, on all platforms (consoles, PCs and mobile devices), to roughly double up 2017’s spending total, and wind up in the $1 billion range this year.

Given how successful the Switch has been for Nintendo, do you think the console-handheld concept is something that they’re going to stick with? They’re a company that has always liked to change things up with new hardware, but consolidating their handheld and console resources has worked out for them very well- so is this something that they will, in your view, continue to do, or can we expect to see separate dedicated handheld and home console systems from them in the future?

I think this is a permanent path for them. I don’t think we’ll see a next-gen Nintendo console until 2023, and a lot things will change in five years, but at this point it hard to argue with success. It also implies there will be no 3DS/2DS successor as Nintendo, and its close partners, increasingly focuses on mobile/portable gaming experiences.

And do you think there’s a chance that either Sony or Microsoft tries to do something along the same lines as well?

Right now, no. I’m thinking PS5 and the next-gen Xbox won’t have built-in screens and will have disc drives.

What are your views on Microsoft’s bid to improve its roster of first party studios? Do you think they intend to cultivate a strong and varied lineup like what Nintendo have, and what Sony have been working towards? Or are the likes of inXile, and Ninja Theory going to continue to do their thing and work on passion projects rather than worry about building up franchises?

Well, Microsoft doesn’t still have as large a game developer base as either Sony or Nintendo even after these acquisitions, as far as I can tell. This is a signal that Microsoft wants to put out more exclusives for Win10 devices moving forward and we’ll likely see more acquisitions as they continue to bolster their first party lineup by plugging “holes” in genres and subgenres they think will grow relatively quickly over time.

"The biggest growth area globally will still be mobile gaming in 2019."

Thinking of franchises that have been put “on ice” – like Mass Effect, or Deus Ex, or even Metal Gear – how much of a chance do you think some of these have of conceivably coming back successfully in the near future?

Never say never, but just like movies, they tend to stop making sequels once customer’s wallets start closing and the property in question doesn’t turn a decent profit.

What are your thoughts on the overall state of the industry, and how do you think things will pan out in 2019?

Well, you seem very console focused in your questions, but the biggest growth area globally will still be mobile gaming in 2019. It’s the largest market segment now by a wide margin and it’s growing faster. Hence Activision-Blizzard’s shift towards mobile and so on. Switch is a great rebound story but if we’re talking total revenue and total gamers, iOS and Android gaming is the new center of the gaming universe, like it or not.