Warframe is one of the bigger surprises for the PlayStation 4 this year. Ported from the PC over the next gen console within a span of months, it quickly made waves as one of the better free to play titles to watch out for when the console launches. And considering that such a line-up includes titles like PlanetSide 2, that’s no small feat.

We recently got a chance to interview creative director Steve Sinclair about the game, talking about its Dark Sector roots, cooperating with Sony and most importantly of all, the PlayStation 4 version and what we can expect come launch.

Ravi Sinha: Warframe had a rather interesting beginning – how much of the original concept for Dark Sector, which was maligned on release, made its way into Warfame?

Steve Sinclair: Hmmm…all of it? At least the parts that have fit into our crazy MMO-lite reimagining of it. The fiction, the art designs, the Warframes are the roots of what has been growing into Warframe. Now it has taken on a life of its own – we have so many passionate players that have supported us. We have our dreams and crazy ideas but now we work for them. 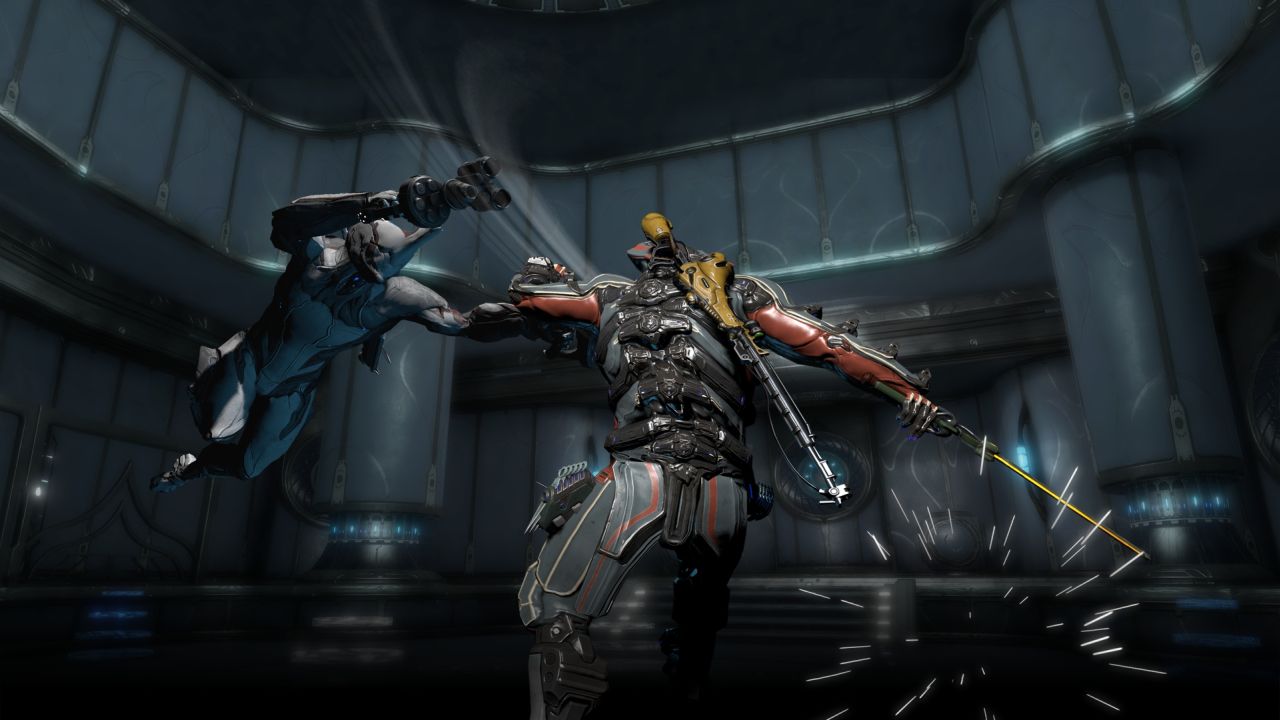 Ravi Sinha: What prompted you to make the game a co-op, free to play experience?

Steve Sinclair: Independence! When we pitched the original idea it was too risky for the people we talked to. When we had freed up a few people (almost a decade later!) to work on what was next, we found ourselves coming back to those ideas we had to shelve. Free-to-play was a way we could start small and build something without taking a publishing contract and without losing creative control.

"We update our game at a staggering pace, which combined with our procedural level generations, keeps the game fresh on a weekly basis. I don't think it hurts that we're free either."

Ravi Sinha: Compared to the previous generation, more console games are going online, primarily in removing the barriers between single-player and multiplayer. What are your thoughts on this trend, and how will it influence a title like Warframe?

Steve Sinclair: Fundamental shift for us – we’re bringing Warframe to PS4 for launch. Without Sony’s openness to a game that is taking advantage of that connectivity (multiplayer with constant updates, free and supported by player’s buying items) we’d have no future on console platforms.

Ravi Sinha: What are your thoughts on TitanFall? Also known as “that other game with mechs that will be available for next gen”. It’s even more interesting considering TitanFall also implements parkour techniques like wall-running and leaping around, but will be exclusive to Xbox One while Warframe is exclusive to PS4.

Steve Sinclair: Huh? What’s TitanFall? Kidding. Saw TitanFall at E3 and it looks amazing and we saw a lot of the parkour stuff we have for our Space Ninjas in there… I expect TitanFall to just raise the competitive bar and push us further to keep our fans engaged. That said, without knowing a lot of about the game, Warframe is focused on PvE and Coop.

It’s a shooter/MMO blend with crafting and dojo building. We update our game at a staggering pace, which combined with our procedural level generations, keeps the game fresh on a weekly basis. I don’t think it hurts that we’re free either. 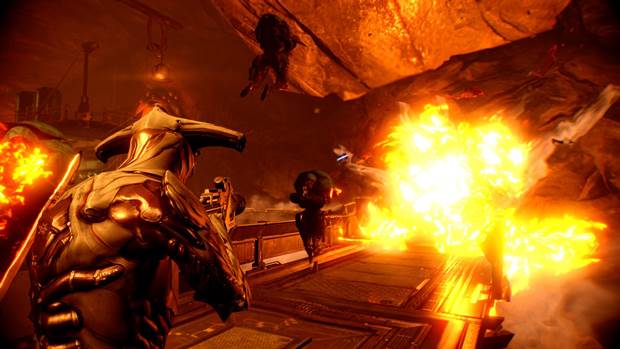 Ravi Sinha: Warfame recently made the news after it was announced to be in development for the PlayStation 4. Given that Sony Computer Entertainment is a publisher on the project, how far does its input go in influencing the final product?

Steve Sinclair: We are the publisher this time (the dev!), not Sony. Warframe is independently funded, with our players and Founders, and published by Digital Extremes. Sony has been great to us and has input on our game when it comes to integration with the platform but it stops there. This is our gig. Yes, it feels great to say that.

"We are growing the game continually and we feel that is a crucial part of our success so far. PS4 will bring new players into the fold as the universe expands, which means new factions, new mission types, new events and new Warframes to play as!"

Ravi Sinha: What will Warframe on the PlayStation 4 feature over the PC version? What kind of improvements or changes can we expect?

Steve Sinclair: I often feel like apologizing for this but the answer is pretty boring: none (at least if I get my way, that is). Our goal is cross-platform play. Our goal is updating the PS4 version in sync with the PC version with all the same content, features and events. For those things to happen–for the eco-system to be shared–we cannot diverge.

Of course we have amazing PS4 features for things that don’t split the player base – the Dual Shock 4 is the best controller I’ve ever touched. The Share features are perfect for our audience. The GPU is a beast and the game looks stellar running on the PS4! But we want there to be one ‘Warframe’ version that all players participate in.

Ravi Sinha: Will there be any new mission types or an expansion of the co-op gameplay in the PS4 version? Maybe a new faction?

Steve Sinclair: As above – the answer is YES – but at the same time it comes to the PC. We are growing the game continually and we feel that is a crucial part of our success so far. PS4 will bring new players into the fold as the universe expands, which means new factions, new mission types, new events and new Warframes to play as! 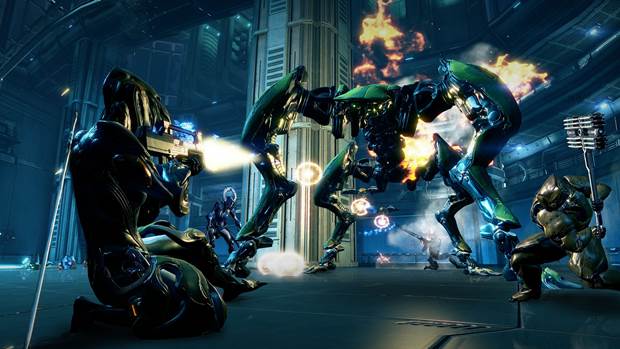 Ravi Sinha: Does the PS4 present any benefits over development for PC? Are there any features on the console such as Cloud computing or the DualShock 4 touchpad that you will be looking to implement into the gameplay? Will these changes help provide an incentive for players on PC to cross over to the PS4, or at least spur an interest in checking out what the PS4 version has to offer?

Steve Sinclair: Yes and no. I love the hardware, and it definitely eliminates compatibility issues. As I said, I love the controller and at E3 we showed ‘flick’ gestures on the touchpad for activating Warframe powers that people seemed to love.

I think if PC players have lower-end PCs, the PS4 will be a great option for them to switch. Hopefully both sides just enjoy the growth of the game and PC players get tons more content from the success on PS4 we hope to get (fingers crossed, looking for wood to knock on).

"We are using a lot of the memory, but because of texture streaming, we have plenty to spare! That's a good thing, it gives us options that we never thought we'd have before, and it opens up possibilities for extra detail and video streaming. "

Ravi Sinha: How are you using the extra GDDR5 memory on the PS4 and what benefits does the unified architecture give while developing Warframe on it?

Steve Sinclair: We are using a lot of the memory, but because of texture streaming, we have plenty to spare! That’s a good thing, it gives us options that we never thought we’d have before, and it opens up possibilities for extra detail and video streaming.

The unified memory is part of what makes the console so great to develop on.

You can use threads to generate textures and graphics assets. You can use the GPU to process physics and effects data.

It’s key in shipping a console that is great early in the cycle while leaving the ceiling quite high for hybrid computing techniques in the future.

Ravi Sinha: What is about the PS4, over the PS3, that motivated you to develop Warframe for it?

Steve Sinclair: PS4 is a powerful console with great connectivity and online features. It lets us bring over our high-end visuals without compromise, with the promise of pushing it even further in the future. The PS3 was a great machine and the SPUs were insanely fast if you customized your code for them – with the PS4 the power increases yet at the same time being more generalized.

We got our Warframe engine up and running in just three months on PS4 – it was such a pleasant experience… with Warframe being a ‘new’ franchise, I guess it just made more sense from an intuitive level to look to future platforms.

Ravi Sinha: Given how free to play gaming isn’t as big on consoles as it is on PC, does the current situation present a market just waiting to be tapped or a bigger challenge in terms of captivating consumers?

Steve Sinclair: Can I say both? We think this is a cool opportunity for us as an independent developer to try this out while it’s still a relatively new concept on the console… but yes, it will eventually lead to a bigger challenge attracting players because their choices will increase while their spare time will not.