Awesome art galore to be had. 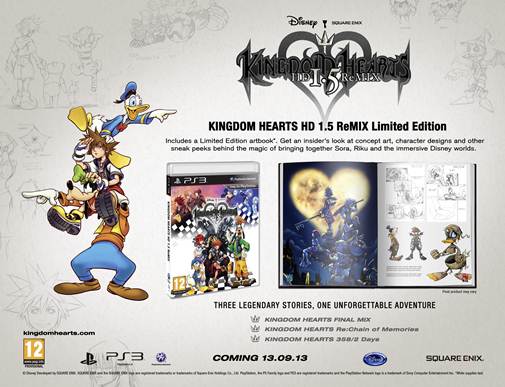 Kingdom Hearts HD 1.5 ReMIX will be releasing in Europe and other PAL territories on September 13th, and pre-orders have already opened up for the same. Of course, with pre-orders come incentives and Square Enix has announced a decent array of the same.

Those who pre-order the game can receive a special limited run art book, which contains art from each of the titles features in ReMIX.

Kingdom Hearts HD 1.5 ReMIX is essentially an update of Kingdom Hearts Final Mix and Re:Chain of Memories, along with a cinematics retelling the events of the Nintendo DS spin-off, Kingdom Hearts 358/2 Days. However, along with several gameplay changes to the first game to better suit Kingdom Hearts 2 veterans, the graphics have also been completely reworked in lovely HD.

The collection also has support for PlayStation 3 trophies for the completists out there. It may not be Kingdom Hearts 3 but it’s still a damn fun experience overall.