Kingdoms of Amalur: Re-Reckoning – 10 Features You Need To Know

Of all the games to see a revival this year, Kingdoms of Amalur: Reckoning was probably one of the least likely. Originally developed by Big Huge Games and 38 Studios and released in 2012, messy circumstances left it in limbo. Even with THQ Nordic purchasing the rights in September 2018, Electronic Arts still had the publishing rights and it was unclear whether the game would ever return. Fortunately, things worked and the somewhat ridiculously named Kingdoms of Amalur: Re-Reckoning was announced this past June. It’s out on September 8th for Xbox One, PS4 and PC.

What can you expect from the remaster or, for that matter, from the original game? Let’s take a look at 10 things you should know before picking it up.

Kingdoms of Amalur: Re-Reckoning will have “improved graphical fidelity” according to all the listings thus far. While developer Kaiko and publisher THQ Nordic haven’t given too many details, this seemingly translates to better textures, more detailed character models, and improved effects and environments (going by screenshots at least). A more technical breakdown will likely be provided before launch so stay tuned for that. 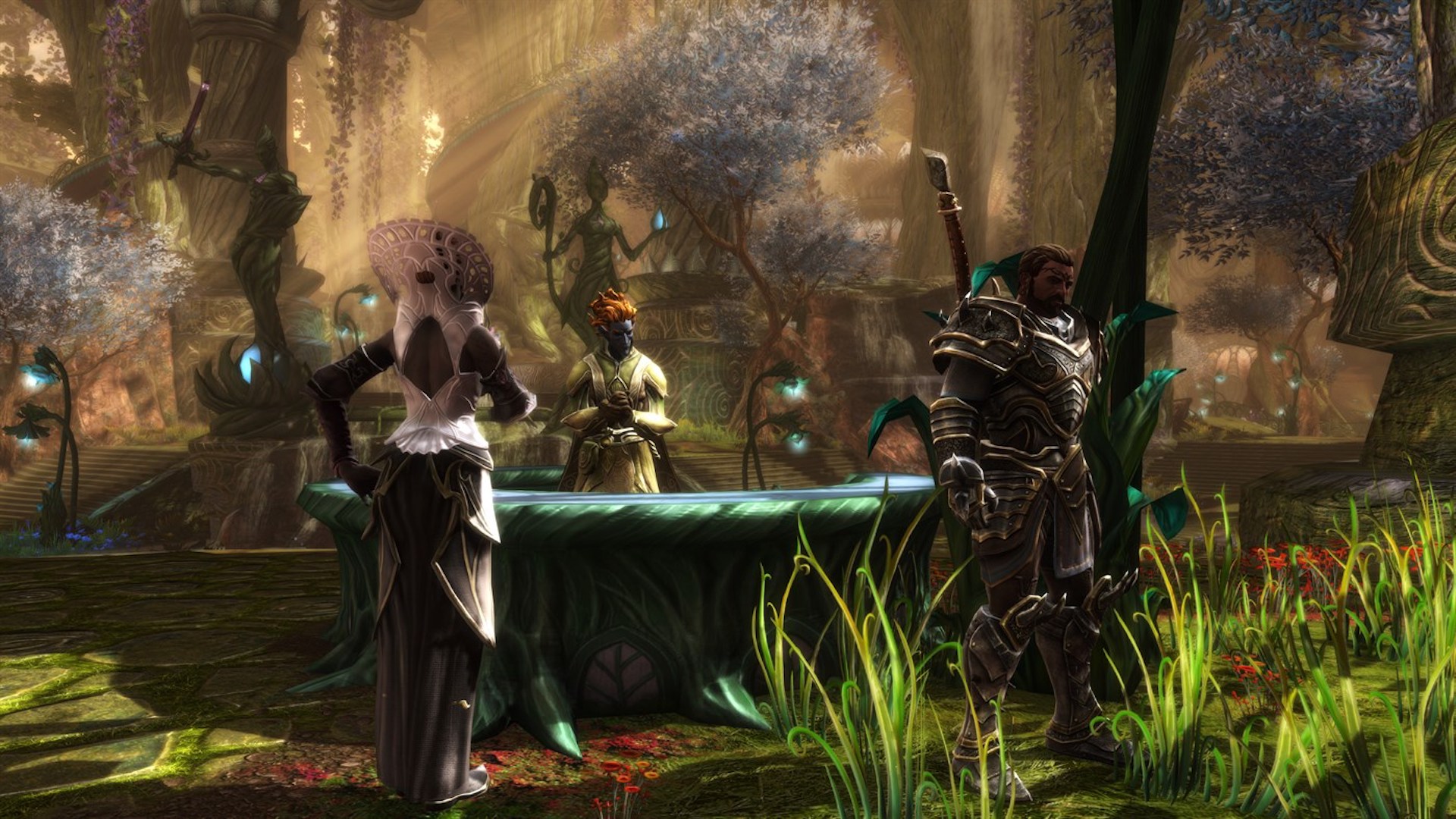 One thing that has been outright confirmed is that the remaster has native 4K resolution support. This seems a given for PC, Xbox One X and PS4 Pro, though the question remains as to how it will look on the upgraded current-gen consoles. Will it even run at 4K/60 frames per second? Will there be different modes for players to choose? The latter seems unlikely but it would be nice to have the option. 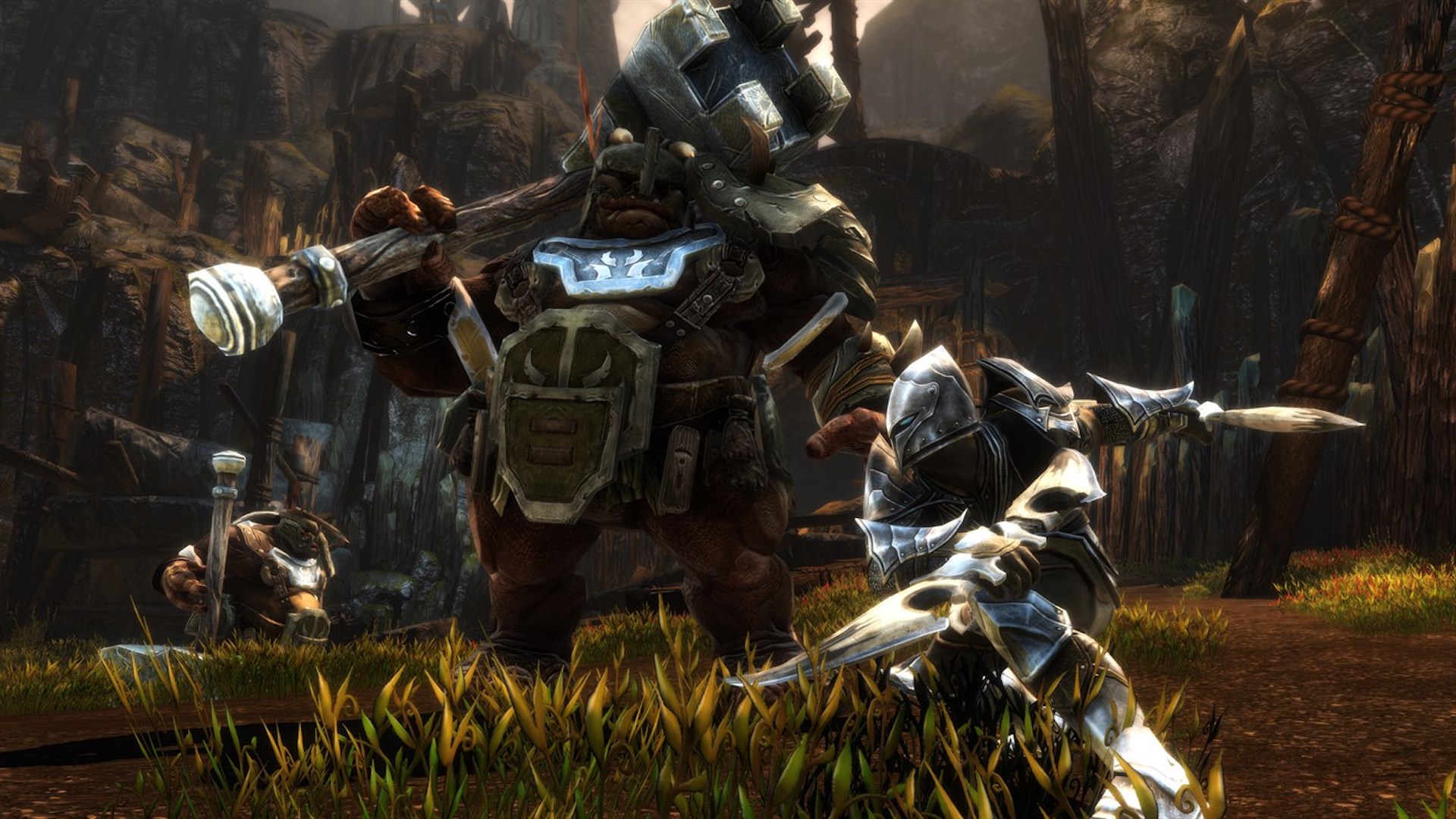 For anyone who’s never heard of, much less engaged with the original, just what is going on? Let’s start with the story and setting created by fantasy writer R.A. Salvatore. It takes place in the Faelands which is comprised of a number of regions and serves as home to the Fae. The Fae are unique in that they’re immortal. However, that actually means they can be reborn in a new body after dying. There are also the standard humans with the Almain and Varani along with the gnomes and light and dark elves (known as the Ljosalfar and Dokkalfar respectively).

The story sees you playing as someone named the “Fateless One” who’s resurrected in the Well of Souls as part of an experiment. When Tuatha Deohn, the corrupted Fae who’s going around killing all the other races, attacks the Well, the Fateless One escapes and meets with Agarth, a Fateweaver. Thus do they journey to learn more about their past and perhaps alter fate.

Kingdoms of Amalur’s combat is real-time and reminiscent of a hack and slash RPG. There are three main stats to invest in – Might, Sorcery and Finesse – and new abilities can be unlocked via their skill trees. The combat itself is straightforward enough with two interesting additions – the Fate system and Reckoning mode. The Fate system manifests in the form of Fateshifting which is essentially a finisher. However, when it’s activated, a button will appear that can be pressed continuously for additional experience before ending a foe.

Reckoning Mode is your standard super mode which slows everything down and allows for quickly defeating enemies. It’s possible to use Fateshifting while in Reckoning Mode, bringing enemies down quicker while gaining more experience in the process. 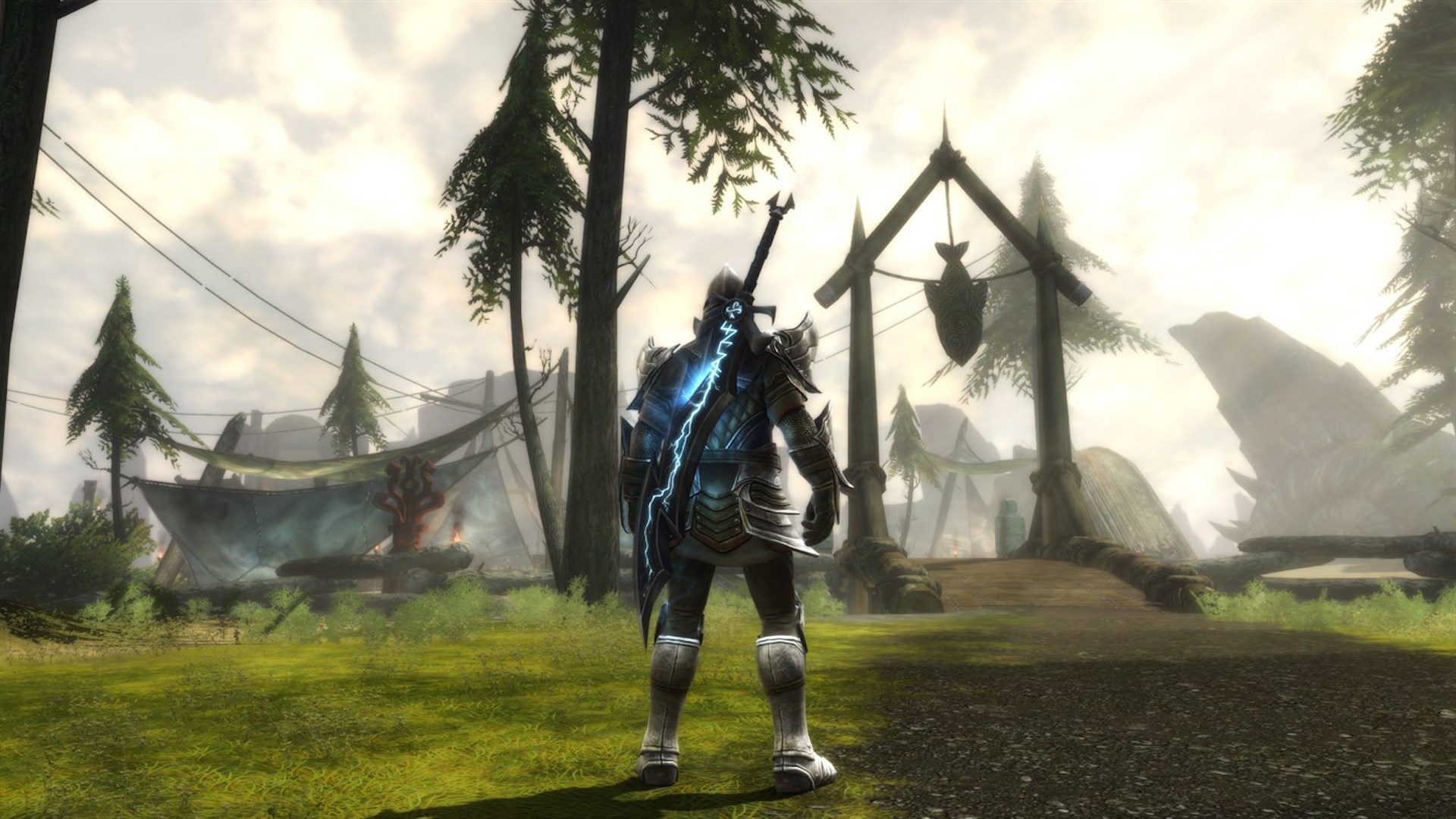 Fate plays a pretty strong role in the story, right up to how you treat different NPCs. However, Destinies are more gameplay-oriented and facilitate the different sub-classes you can change to. As you invest more points into Might, Sorcery and Finesse, you’ll unlock new Destinies. For example, when investing in Might, the Brawler will be your first class and has melee attack damage and block efficiency bonuses. Invest more points and eventually, you’ll unlock the Soldier who has both of those along with a stun duration bonus. In the same way, investing in Finesse will allow for more ranger and rogue-like classes while Sorcery offers mage-like classes.

But wait, there’s more. Invest points into two stats and you’ll unlock hybrid classes like the Warden who specializes in melee and ranged damage along with having a critical hit chance bonus. Or the Arcanist who can blink around while dealing increased piercing damage and guaranteed critical hits to panicked foes. You can even invest in all three stats for Jack of All Trades Destinies. 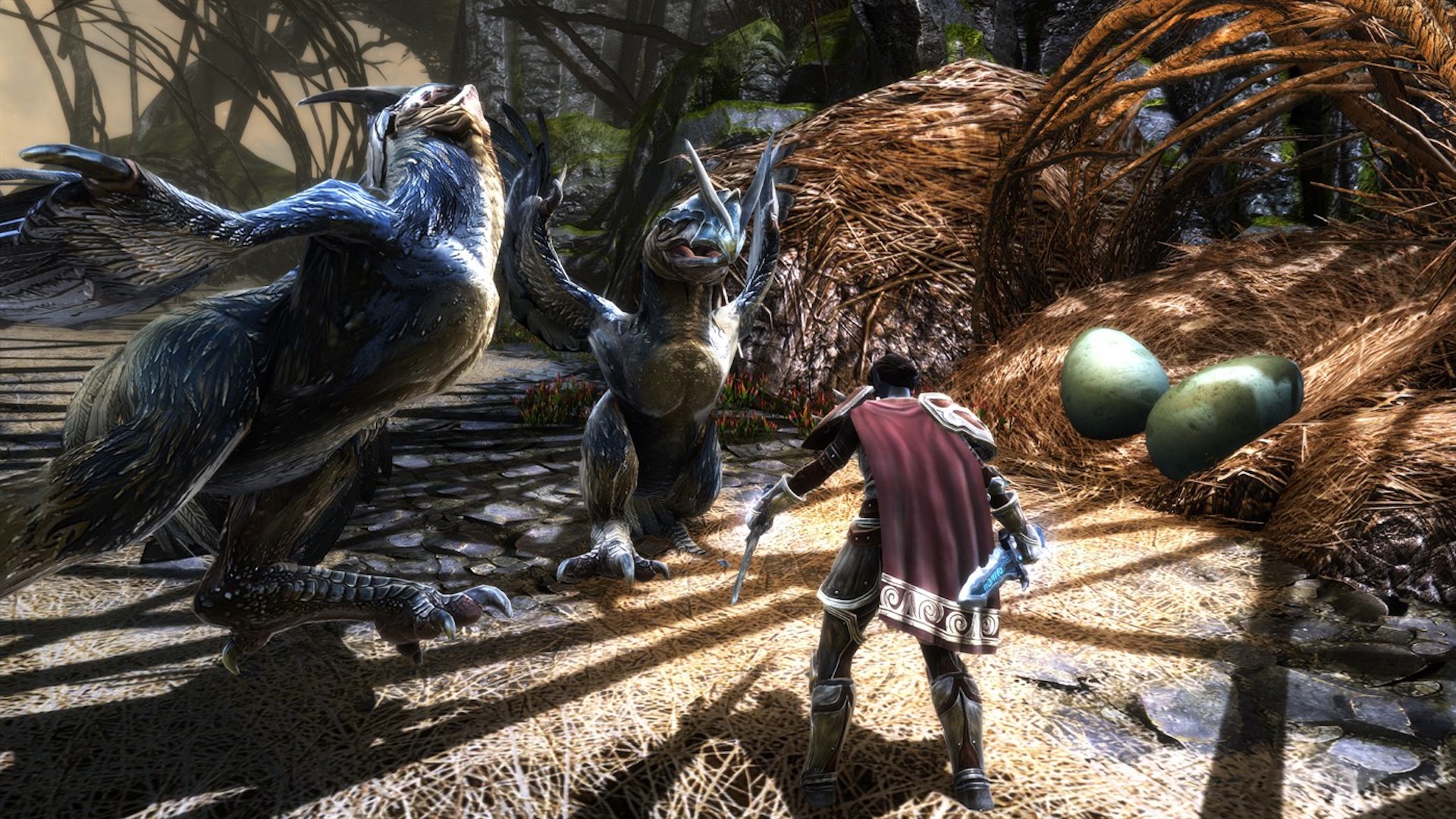 Among the many things that Kingdoms of Amalur is known for is its extensive content. Not counting the DLC, it’ll take over 100 hours to experience the story and side quests. The side quests can vary from regular fetch quests and kill missions to faction quests, which is good for developing one’s character and playing around with the combat. Overall, you can expect over 200 side quests, an extensive main quest and numerous other tasks to keep you busy. 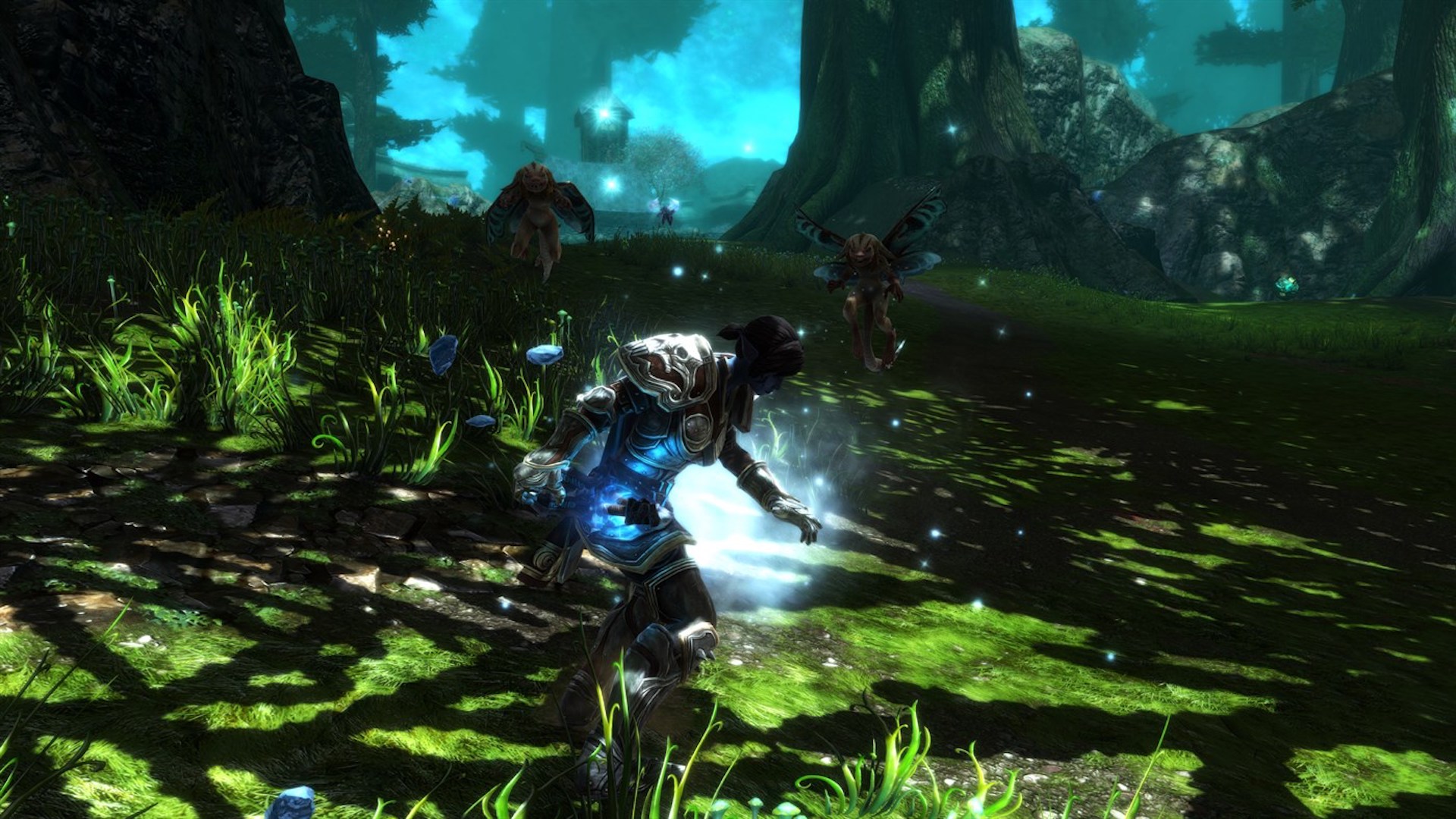 Of course, Kingdoms of Amalur: Re-Reckoning has more to offer, packing all of the DLC with it. This includes the Teeth of Naros, which features a new region and city along with new weapons and armor, a new damage type and a new race, the Kollossae. There’s also The Legend of Dead Kel which adds a new island, new enemies, a new type of dungeon, new items and an estate for players to keep their stuff. Each of the above DLCs has their own main quest and side quests as well, and together adds about 20 hours of playtime to the experience. Finally, there’s the Weapons and Armor Bundle which offers new weapons and three armor sets befitting each main stat.

According to the game’s Microsoft Store listing, the overall size will be 29.97 GB. Though it doesn’t seem all that big, especially considering current-gen titles that can easily surpass 100 GB, the original game was less than 7 GB in size. Even factoring in all of the DLC, the remaster being roughly 30 GB could indicate how much work has gone into improving the assets and environments. 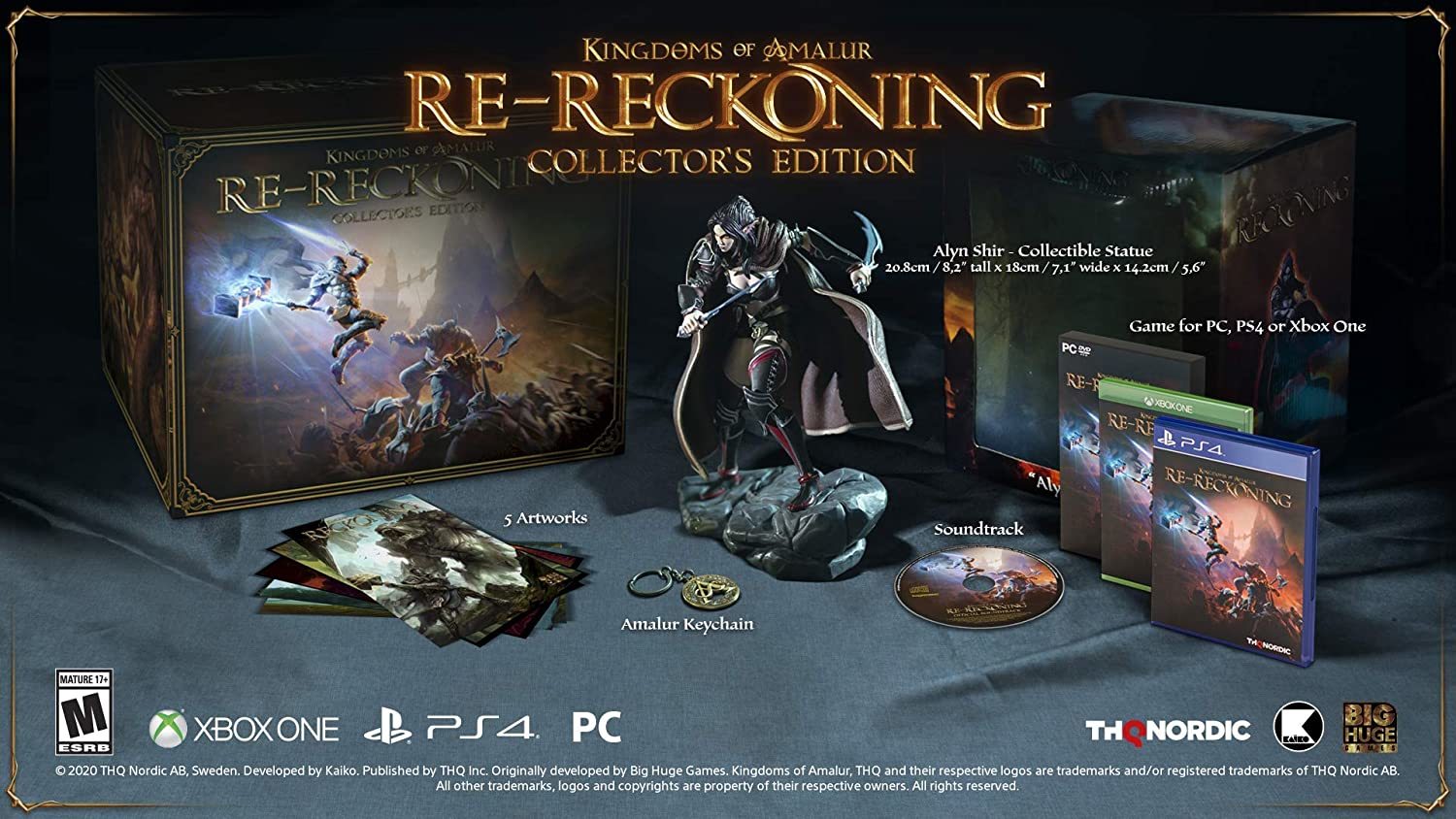 Kingdoms of Amalur: Re-Reckoning has three separate editions on offer – Standard, Fate and Collector’s Edition. The Standard Edition, costing $40, provides just the game. The Fate Edition contains the base game along with a new expansion (which we’ll get to in a bit) for $55. For the die-hard fans, the Collector’s Edition provides the base game and new expansion, five artworks, the original soundtrack, a key-chain and a statue of Alyn Shir along, all packed in a large box. It’s $110 on PS4 and Xbox One while costing $100 on PC. 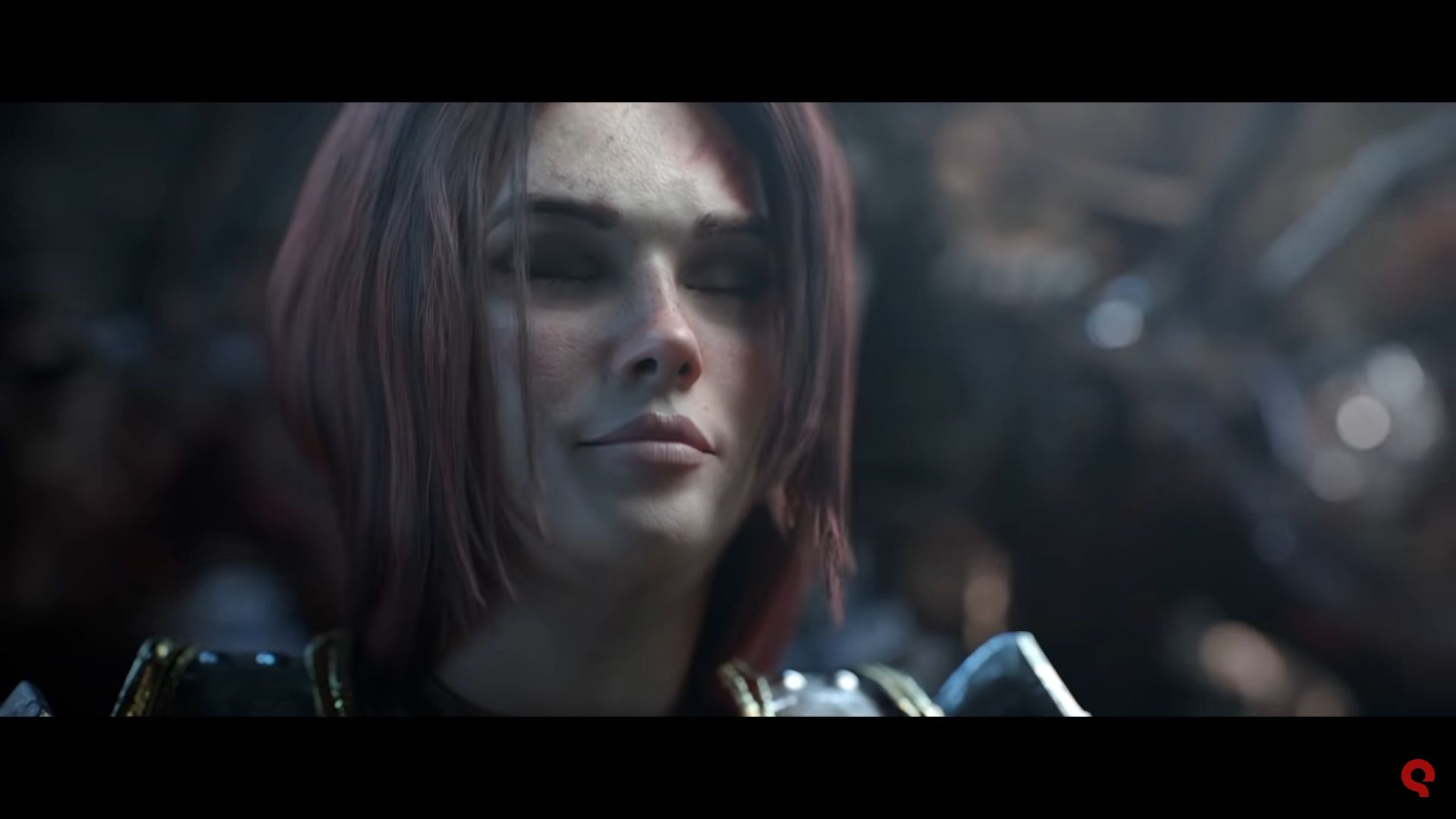 As noted before, a brand new expansion will be coming to Kingdoms of Amalur: Re-Reckoning with Fatesworn. It’s out in 2021 and according to its Microsoft Store listing, there will be +5 hours of gameplay. The story sees the Fateless One visited by Agarth who informs them that their resurrection in the Well of Souls has caused wide-spread consequences to the Weave. How things progress from there remains to be seen but it’ll probably be a while before more details are revealed.