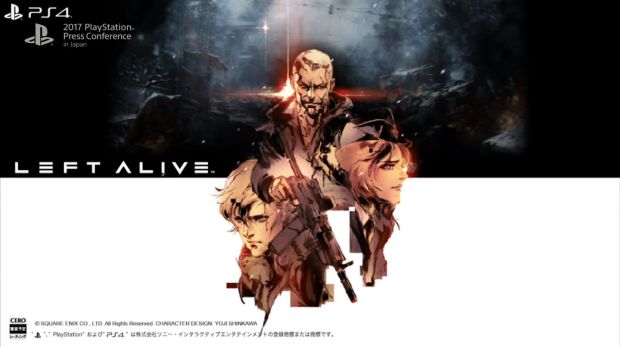 Update: Left Alive has been described as a “survival action shooter” that will also be coming to PC.

A strange new game was announced by Square Enix at Sony’s TGS presser – it’s called Left Alive and judging by the teaser released, it seems to take place in a post-apocalyptic setting with huge mechs.

It actually reminds us of the company’s vaunted Front Mission series. So when you hear that the director is Toshifumi Nabeshima, who produced the Armored Core games for From Software along with directing the first game and writing the script for Dark Souls 2, things get interesting. Producer Shinji Hashimoto is also on board as is Yoji Shinkawa, the man known for his legendary character designs in the Metal Gear and Zones of the Enders franchises.

Left Alive doesn’t have any more information apart from this but it will be exclusive to the PS4 and release sometime in 2018 for Japan. Details on a Western release are still pending. Perhaps more updates and gameplay could be offered on September 21st when the Tokyo Game Show begins? Here’s hoping.