Life is Strange Visuals Analysis: PS4 vs. Xbox One vs. PC

Dontnod Entertainment’s Life is Strange is, well, strange but in a good way. Ever since Telltale’s The Walking Dead, episodic adventure games have been the “In” thing. This genre is being pushed forward the most by Telltale with series like The Wolf Among Us and Tales From the Borderlands but there are also examples like Dreamfall: Chapters and to some extent, Resident Evil: Revelations 2. What sets Life is Strange apart, besides coming from the minds that delivered the beautiful but under-polished Remember Me?

It’s hard to pin-point just what the elusive X factor could be. The art style and presentation suggest a dreamy, slice of life style drama that’s not all different from The Longest Journey and Dreamfall: The Longest Journey. While not pushing the boundaries of what today’s consoles are capable of, it’s strangely attuned to today’s top PC hardware. Truth is stranger than fiction and whatnot aside, let’s take a look at the PS4, Xbox One and PC versions of Episode 1: Chrysalis.

Keeping in mind the atmosphere it’s going for, Life is Strange puts a lot of emphasis on light rays which breathe life into just about every scene. Colours are employed liberally but intelligently and despite lacking a big budget, Episode 1: Chrysalis comes off as more than just an indie effort. Screen space reflections have been used on a small scale and a custom ambient occlusion solution is employed to further flesh out environments and characters. The effect is actually quite to screen space ambient occlusion at times.

The restrictive budget for Life is Strange does rear its head occasionally though. Unreal Engine 3 is powering the proceedings and considering its place as the leading engine for the last generation of consoles, it’s not even coming close to what the PS4 and Xbox One are capable of. This is especially funny when one considers that Remember Me looked pretty good on the PC, Xbox 360 and PS3. Animations also feel somewhat toned down. They’re not bad and they won’t take you out of the game – they just feel limited at times.

Head to head comparison between the PS4, Xbox One and PC versions. Select the 1080p option for best possible video quality.

The PS4 and Xbox One versions of Life is Strange both run at 1080p resolution. The frame rate is 30 frames per second and it wavers between locked and unlocked at times. For the most part it’s locked with brief stutters at times but they’re hardly noticeable. A premium anti-aliasing solution is missing on the consoles with both versions employing a custom post process AA. Compared to the PC, the console versions have gotten the short end of the stick with regards to AA solutions. At least the custom AO is similar across all versions.

Thankfully, Dontnod didn’t skimp on the quality of shadows, detail or textures for the PS4 and Xbox One. Everything is in line with the High settings for the PC version and that’s good news. Now if only the frame rate would follow suit. There aren’t any noticeable differences when comparing both versions side by side.

Life is Strange on PC feels like a significantly different visual experience for a number of reasons. Though the textures and such are similar to the consoles, Dontnod has provided a plethora of different graphical options. A plethora probably doesn’t do the variety justice. In the anti-aliasing department, you can choose from EQAA 16x, MSAA 2x, MSAA 4x, EQAA 4x, EQAA 8x and so on. The MSAA anti-aliasing helps bestow a significant measure of crispness to the game’s visuals. It should be noted that EQAA 16x provides a noticeable difference from the lower settings though. 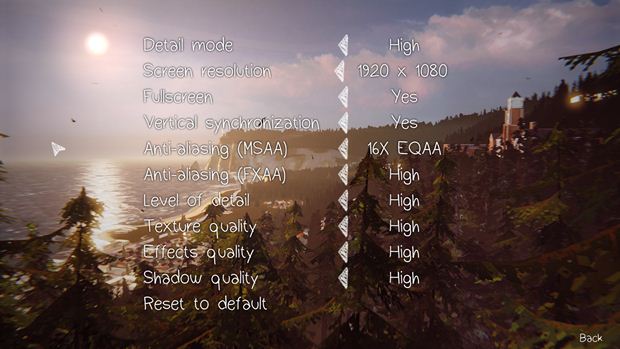 The PC version is packed with various graphical settings.

Nonetheless, having so many different options feels liberating. Life is Strange focuses more on story-telling than it does on wowing players with environmental effects or geometry but it features more freedom in its graphical options than, say, Dying Light and Evolve.

Given the nature of the title, we tested out the game on a single PC configuration which included an AMD FX 8350 and Radeon R290, which was capable of achieving a frame rate of +70 frames per second. Suffice to say, most modern PCs won’t have a problem with running Life is Strange at the highest settings. Dontnod took the effort to make the game scalable across a variety of hardware so even those with a GeForce GTX 660 should see a strong performance.

Life is Strange isn’t the blow-away graphical masterpiece any one was expecting because no one was expecting it to be so. The game takes a considerably different approach to its art-style compared to Remember Me, eschewing large open world environments and detailed architecture for a more personal, down to Earth adventure. It’s still beautiful but in its own right, no matter which platform you experience it on.

That being said, the PC version is our top recommendation. Not only is it capable of running at 1080p resolution and 60 frames per second but it features a wider variety of AA solutions and a more stable frame rate. It’s also scalable across different configurations thus ensuring most users won’t be left out. The PS4 and Xbox One versions still look pretty good and at least have the same level of detail as PC version’s high settings.

The game’s lack of overtly snazzy visuals is obvious regardless of the version you play so it comes down to the one that performs best. Both current gen versions simply fall behind due to the lower frame rate, post process anti-aliasing and variations in said frame rate which cause slight stutters. Opt for the PC version without any regrets.