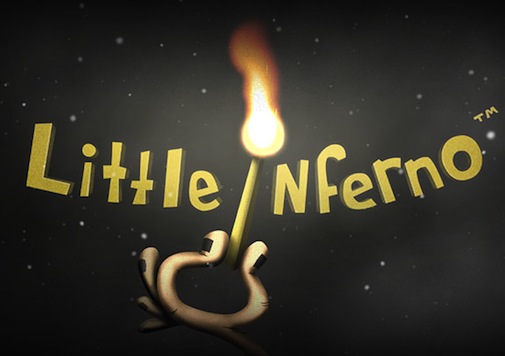 World of Goo developer 2D Boy went a bit AWOL after it’s first premier release. Which is odd, considering how fun and memorable their physics-based puzzler was but it’s finally come out of curiosity to announce it’s upcoming opus Little Inferno, scheduled for release this Winter.

We’ve just overhauled and updated this site to become our work-in-progress dev ‘log from here on out, to track the progress of our new game Little Inferno, leading up to a release by this winter on multiple platforms.

Until now, we’ve intentionally not mentioned anything about the game, to hopefully avoid being another indie game that appears to be stuck in development limbo for billions of years.

But now that we’re almost done, we’re gathering some first bits of info on the new game to post in a few days. So keep an eye on this space if you’re curious to track/participate in the development of Little Inferno, with RSS or something. Does anyone use RSS anymore? Ham radio? Or is it social face places now? Can my Netscape Navigator do that?

Important survey question: What would you most like to set on fire?

Is “everything” a valid choice?