We go hands on with Capcom's Lost Planet 3.

Lost Planet 3 is a Western, it just so happens that your horse is a giant mechanised tank – called a Rig – and the Wild West is an alien planet, perpetually blanketed in snow. Even the game’s music evokes images of cowboys and saloons, with the missions essentially being bounty hunts. But instead of chasing down wanted men, you’re hunting after – and performing tasks to seek payment of – Thermal Energy.

We were shown the first portion of the single-player campaign in our hands-on. It started as a slow crawl through an icy cavern. It attempted a slow burning build up to the action, but wasn’t completely successful, with the quiet of the cavern pierced by the sound of you shooting sentient tulips in the face after a mere twenty seconds of exposition. A minute later and you’re taking part in a QTE. 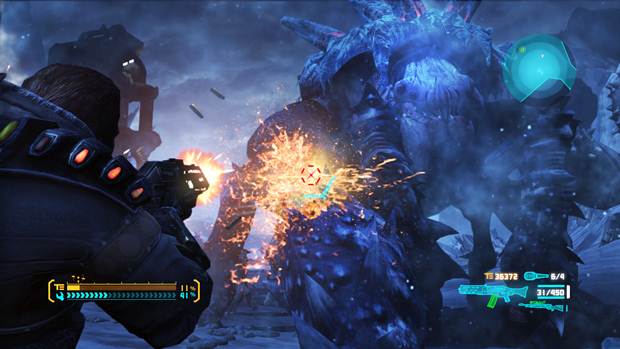 The game isn’t ashamed of what it is, never shying away from its nature, it’s all about shooting indigenous alien creatures in the face, sometimes while on foot, and sometimes crushing them underfoot from the relative safety of your Rig.

Since you will be doing a lot of shooting, it’s worth mentioning that – in the Xbox 360 build I played at least – the aiming feels a bit erratic. Slight inputs on the stick seem to hardly move at all, whereas a medium input leads to you spinning around like a meaty planet.

The Rig combat wasn’t really shown, just a short stomp from the hub area – where you can buy weapons and upgrade your Rig – and then a staircase, forcing you to eject and proceed on foot. Upon returning to the mech, the player is assaulted by the tulips, but walking over them seems to work just as well as swinging the Rig’s limbs around. 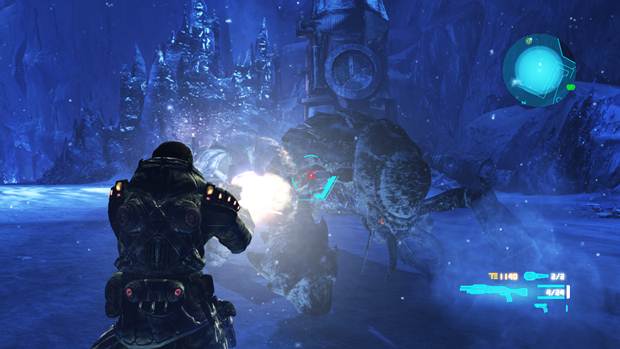 Inside the Rig, it feels satisfyingly weighty, with the screen shaking as you stomp around. You can even listen to music inside the machine, and listen to video logs sent from Earth by your friends and family. I can’t tell you if the music was any good, because it was drowned out by the game’s orchestral soundtrack, and the sound of bullets squelching against alien hide.

The characterisation seems good – especially between the protagonist, Jim, and his Rig mechanic, Gale – and you can feel the Western influence permeate in the cutscenes. On top of the short single-player hands-on that was shown, we also witnessed a developer playing and additional activity called ‘Platform Mode’. In this mode you must protect your Rig, as you turn it into a drilling platform to acquire additional Thermal Energy. 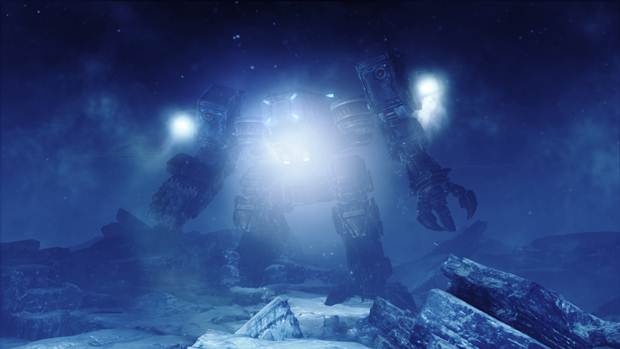 Platform Mode is basically just wave defence, where spindly alien legs penetrate metal more than a misplaced grenade by the player. The creatures filter in, attacking your machine, presumably because they don’t like vibrations, whilst you defend and repair it, with a stick-twiddling mini-game.

There are even sniper tulips.

Again, it’s nothing new, and like with everything else that was shown, it’s hard not to feel a little underwhelmed. Inside the context of the main game, it might all form together to make a satisfying whole. Upgrading your Rig, and completing side quests could be completely intoxicating in the boxed release, but the separate sections of gameplay don’t stand up very well on their own.

After the short single-player, we were taken into another room where we got a chance to try out the game’s multiplayer component. The mode we got to try is called ‘Scenario Mode’, which is different depending on map choice. 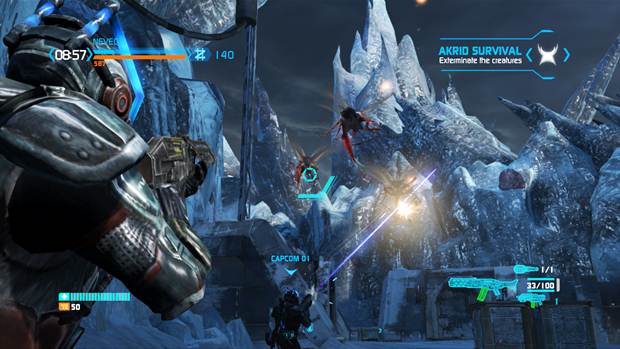 In one map you may be defending bombs whilst the enemy sets them. In another you might be defending a drill whilst the opposing team shoots the drill. Again, it’s nothing groundbreaking, but I had much more fun than I did in my short time with the single-player.

You can grapple up to vantage points to get the drop on your enemies. Rigs also appear near the spawn, allowing lucky players to get a few easy kills.

There are your usual selection of guns and perks, with some interesting and one in particular being potentially game breaking. A journalist who was sat next to me kept using ‘Noxious Gas’ a perk that’s activated after death, killing anybody nearby with the toxic fumes. He came second in his team, and nearly all his kills were from dying – presumably in retaliation for his cowardice, the game later locked his character into an animation with his arms outstretched, unable to shoot.

At one point my gun also disappeared, which put me at a slight disadvantage. 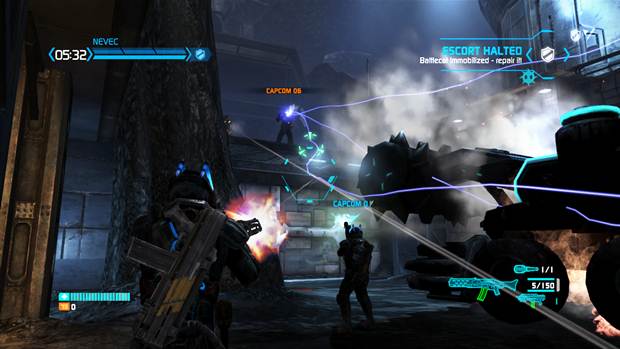 It’s hard to judge a multiplayer game fairly after half an hour, but from what we played it seemed fun and functional, just don’t play it before the single-player. The reason I say this is because after looking at the character selection screen, with characters from  the main game split by faction, it didn’t take a neurologist to guess where the story was going.

The game seems to be ambitious in scope, and I felt like I barely scratched the surface of the hostile planet, so don’t base your purchase decision on this preview. But I would suggest you wait for our review, to see if it makes us hot under the collar with Thermal Energy, or it leaves us feeling cold.