Check out the contents of the $150 Collector’s Edition. 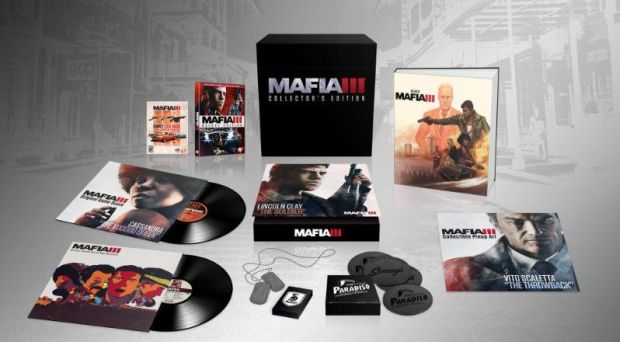 2K Games has revealed new information on Mafia 3’s Collector’s Edition along with an image of what it contains.

Said contents include faux leather drink coasters, Lincoln Clay’s dog tags, the official soundtrack on vinyl, a 56 page art book, the base game and the Season Pass. All of this will retail for $150 though some information – like what content can be expected with the Season Pass – has to be revealed.

It was also announced that Mafia 2 has been re-released on Steam and you can pick it up along wit its DLC at an 80 percent discount. This deal will be valid till June 8th so act quickly.

Mafia 3 will be releasing later this year for Xbox One, PS4 and PC on October 7th. It takes place in New Bordeaux, inspired by New Orlaans, in 1968 and features protagonist Lincoln Clay seeking revenge against the mob for his fallen comrades. Stay tuned for more information on the game as E3 2016 rounds the corner.