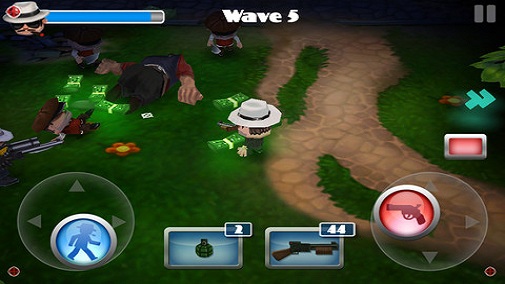 Mafia Rush is a free game for the iOS, and is pretty bad. The main reason is obviously the controls. It’s a dual-stick shooter, and you know how much accurate they are. There are four main gameplay modes here – robbing a place and bringing back the cash to your car, bomb an armoured car with C4, defend your car which contains the cash, and basically a survival mode.

All of them aren’t fun at all, but I sort of liked robbing missions. It isn’t that complicated at all, but when you try to bring back the cash to your car, and you will obviously have to fight a bunch of bad guys. Getting hit by a bullet means, the character you are “controlling” will drop the bag down. And before you clumsily try to go back, thanks to the controls – you will be gunned down. These moments are infuriating, and I don’t have to mention again how much I hate these dual-stick shooters. Especially the badly implemented ones like these. 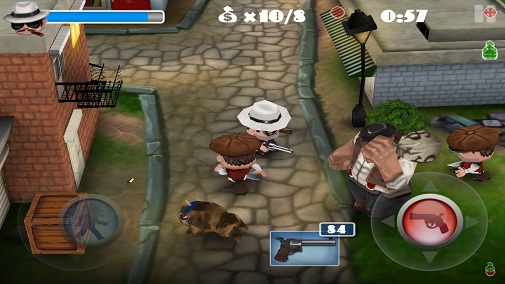 Of course, this is just subjective. People who are adept at using these sort of controls will find less problems, but that doesn’t change the fact that it’s a major pain, and unresponsive. Once you complete a level, you earn money. You can buy a lot of things to supplement you in the game – like turrets and stuff. The visuals are okay for an iOS game, it could have been worse. Of course, considering it’s free like some other games out there, you have the option of purchasing things in-game.

I’ve been way too negative here, but that’s mainly because the controls are so damn frustrating, and it’s a real pain to aim at people. There’s not much content here, or any sort of story to keep you busy, although, they should have done that. My main problem here was fighting a bunch of enemies, and why that was a problem because I was struggling with the controls. The game is way too short, and it just didn’t engage me like some of the other dual-stick games out there on the platform.

You are free to try out the game though, it’s free! (d’uh). But I can’t really see this game helping people pass their time as they wait for a train, or a bus, or something. The shoddy controls kills the entire experience, at least for me.

It's an interesting idea which isn't explored much on the iOS platform. Free.

Final Verdict:
MEDIOCRE
You are free to try out the game though, it's free! (d'uh). But I can't really see this game helping people pass their time as they wait for a train, or a bus, or something. The shoddy controls kills the entire experience, at least for me.
A copy of this game was provided by Developer/Publisher/Distributor/PR Agency for review purposes. Click here to know more about our Reviews Policy.