Assassin’s Creed 3 was officially announced a few weeks back. It will be releasing in October. Along with the announcement, Ubisoft also hailed AC3 as the true next generation of both the Assassin’s Creed brand and interactive entertainment/storytelling in general.”

According to recent rumours, Assassin’s Creed 3 is set during the American Revolution. However, many other locations are also on the cards, if the reports are anything to go by. 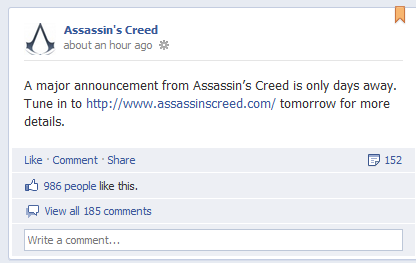 Recently, Ubisoft CEO Yves Guillemot said that he believes that AC3 will be the biggest game in the Creed franchise. “Assassin’s Creed is an incredible franchise and there are a lot of expectations that it will continue to grow,” he said. “

“We are pleased with our continued success so far: in the US, Assassin’s Creed: Revelations was a Top Ten title for the entire calendar year, which shows that the demand is definitely there. We think that delivering regular instalments and expanding the brand to other platforms will continue to satisfy the demand, while at the same time attracting new fans. And we’re confident that the next instalment of Assassin’s Creed will be the biggest to date.”

Stay tuned to GB, we’ll have more updates for you soon.