An anonomous source has granted information on a F.E.A.R 3 promotional viral to VG247,com.

The auditions for the promotional video took place on the 14th and 15th of January in a Los Angeles studio. Marcus Nispel, the director of the Friday the 13th and The Texas Chainsaw Massacre remakes, has been chosen to direct it, so we can assume something gory this way comes.

F.E.A.R has long been rumored but never confirmed, but now avid fans can rest easy as they await the web-only promo film. Monolith, the developer behind the F.E.A.R franchise was hiring for a ‘next generation console title’ last year, but no further details were released. But does this mean the third game in the series will not have a PC component? 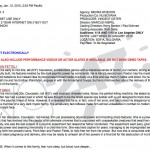 Click on the image to see them full screen. It contains the casting call, and other details.