Marvel Heroes tries hard, but winds up being more of a villain.

Licensed games based on comic book heroes have always had a hard graft, one that has been lessened in the recent cultural consciousness by excellent titles such as Rocksteady’s Arkham series.

"In a sea of predictable gameplay ideas, the mixture of spandex and nostalgia is the most appealing element of Marvel Heroes' opening sections."

Usually relying on the quality of its cameos over gameplay excellence, it is understandable that so many licensed titles are discriminated against and, whilst I do wish Marvel Heroes was another gem like Arkham Asylum, it just isn’t. A free to play Diablo clone, Marvel Heroes manages to spend so much time cramming Marvel characters down your throat that it totally forgets to innovate within the ARPG genre in any meaningful way.

The game starts off with Dr. Doom obtaining the Cosmic Cube, a device of untold power. The main scenario revolves around several Marvel Heroes uniting to prevent Dr. Doom from committing heinous acts with the cube. It has enough charm and cheesy one-liners to crack a smile, but I won’t be expecting it to win a Bafta any time soon.

Regardless, it does a good job of running the player through an unseemly array of Marvel universe locations and characters in a short span of time. The word fangasm comes to mind. 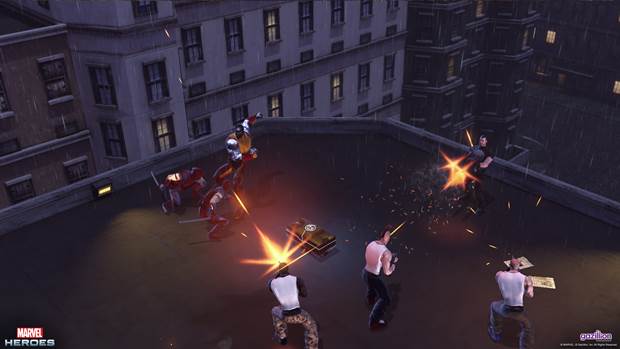 It’s a good thing the references to other heroes come thick and fast as, in a sea of predictable gameplay ideas, the mixture of spandex and nostalgia is the most appealing element of Marvel Heroes’ opening sections. That’s not to say that Marvel Heroes is lacking in fun or functionality, far from it. That said, if you’ve ever played Diablo or Torchlight, you’ll have a strong and foreboding sense of deja vu as you click click click to maim, kill and loot. It’s an ARPG by the book and, until you unlock a greater variety of skills, one that is fairly average. That isn’t to deny the addictive quality of the genre though. Most action role playing games are inherently moreish, a trait that MH espouses in spades.

"You can play the whole game with the single free hero you get at the beginning, but this isn't hugely recommended, if only because the free characters are just a bit boring."

Things only get better as you level up and acquire more skills for your selected hero. Though all skills offer unique powers, there are comparatively few separate skills for each hero in MH than for your average class in Diablo or Torchlight. The reason for this is due to Marvel Heroe’s free to play business model, a payment method that relies on you purchasing new heroes in order to keep the game afloat. Though this is a decent and uncynical implementation of microtransactions, it is not without its flaws.

It’s safe to say that nobody likes it when free to plays lock lots of content out for those who don’t pay, a sin that Marvel Heroes never commits. You can play the whole game with the single free hero you get at the beginning, but this isn’t hugely recommended, if only because the free characters are just a bit boring. Daredevil, Hawkeye, Storm, Scarlet Witch and The Thing are your choices and, whilst they are perfectly playable, the more inspired hero designs require a bit of up front spending. Here’s where things get sloppy, as the prices for some heroes are steep. 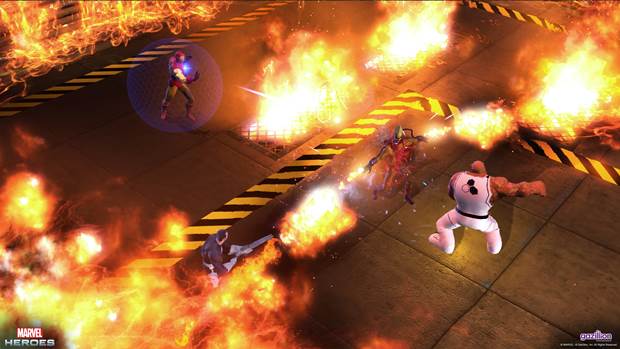 I was kindly supplied with a stash of in-game credits I used to buy myself a few fun characters. Spiderman and Wolverine were my favourites, and I didn’t think too much of my purchase until I realised that the credits I was given would cost me over £60 to purchase. £60?! I could buy both Torchlight 2 and the entire Diablo series for that kind of money. With some of the more famous heroes costing upwards of a tenner each, this is only free to play in the most liberal of senses. This issue is furthered by how similar each hero is, with characters in the same class playing in an all too similar fashion.

" It never really makes sense when you just find quests getting ticked off without your input, so try your best not get hung up on individual missions."

Things get worse when you consider the game’s MMO structure. It’s one of the more interesting elements of Marvel Heroes’ design, merging the ARPG genre with the huge player counts and instances of a massively multiplayer online title. The problem comes in the confusion caused by character repeats. With only five free heroes on offer, you’re bound to encounter areas with fifteen Storms and a small army of Hawkeyes hunting down a single quest.

Far from dropping the suspension of disbelief, I’d argue this just annoys in a practical sense, regularly obscuring your view of the action. New characters and costumes can drop as rare items as you play but, more often than not, an expensive trip to the in-game store is the only way to stand out from the crowd. Even worse is how quests get jumbled up with so many people competing. It never really makes sense when you just find quests getting ticked off without your input, so try your best not get hung up on individual missions. 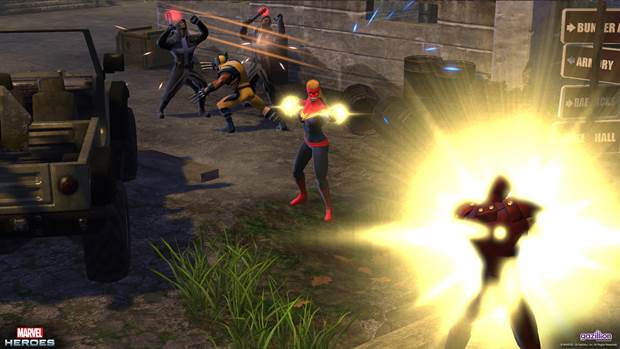 If you can get over these F2P pricing issues, there’s a lot of game to love in Marvel Heroes. The selection of characters adds huge variety to an already lengthy campaign, and the inclusion of several post-game challenges further lengthens the content on offer. My problem is in how hero levels are handled across your account, with all characters having a separate XP pool. There is a rested XP stash that is assigned when you aren’t logged on to the game, but it still means you can’t just swap heroes in and out as you please. With each new purchase starting off at level 1, you either tough out a tricky grind or have to repeat earlier levels you’ve already finished. It’s a shame such little thought was put in here, as trading out heroes on the fly could really have been a string to Marvel Heroes’ bow.

"Outside of a bountiful license though, Marvel Heroes is too boring and far too reliant on an unrewarding grind to warrant much fanfare."

At no point did I hate my time with Marvel Heroes but, especially when you consider how much money must be spent to truly avoid the confusion inherent in the game’s MMO elements, there isn’t enough here to take your attention away from competing entries in the genre. Diablo 2, Diablo 3, Either of the Torchlights and even the recently launched Van Helsing offer at least something worth investigating.

Outside of a bountiful license though, Marvel Heroes is too boring and far too reliant on an unrewarding grind to warrant much fanfare. You can’t really argue too much with a free game, but when the heroes, enemies and item drops are as repetitive as they are in Marvel Heroes, you won’t want to invest too much of your precious time.

Fast paced, Addictive gameplay, An all star cast, Lots to do, MMO hubs

Not especially pretty, Can get expensive, Little innovation, MMO elements can get messy, Repetitive characters and loot

A fast and fun attempt at a free to play Diablo clone, Marvel Heroes is demoted by excessive store prices alongside a lack of innovation and quality design

A copy of this game was provided by developer/publisher for review purposes. Click here to know more about our Reviews Policy.
Tagged With: free to play, Marvel Heroes, pc, Steam