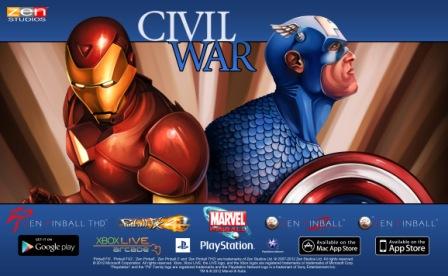 Marvel Pinball gets a new table which has a civil war theme. We have reviewed a lot of tables for the game and most of them have been fantastic, and this one is shaping up to be great as well. It will be available as a standalone DLC on November 21st.

“Join forces with Iron Man or Captain America in the newest Marvel Pinball table, Civil War! The Superhuman Registration act has stirred up controversy within the Marvel universe,” reads the press release.

“If passed, this act would force those with super powers to register with the federal government and reveal their true identities. Iron Man is in favor of this act, while Captain America leads the charge against it. Choose a side and rally the support of other superheroes!”

Here are the pricing and other details.