Which side of the draft will you be on? 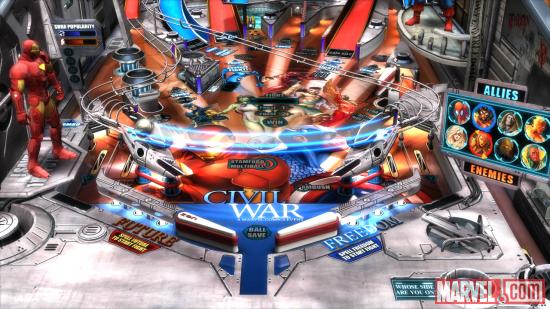 Zen Studios has announced the release of Marvel Pinball: Civil War, as part of their largest simultaneous release in history. The game will release for a variety of different platforms, as listed below:

If that weren’t enough, you can also download the soundtrack for the Civil War table here.

For those whose knowledge of the Avengers is limited to the big-screen release, Civil War was a cross-promotional comic book event for Marvel Comics wherein it’s heroes were sharply divided by the Superhuman Registration Act that was required to be signed in light of tragedies that occurred in the universe. It had many special moments including the death of Captain America, the formation of several Avengers teams, Spider-Man revealing his true identity to the public for the first time, Tony Stark leading S.H.I.E.L.D. and much more.