We take a look at Capcom's fighting game.

In the early 1990s, the fighting games genre exploded in popularity, thanks in no small part due to Capcom’s Street Fighter II, and of course, Mortal Kombat. As the gaming audience expanded with the onset of the Playstation, fighting games underwent multiple shifts to accommodate newer audiences that were perhaps not used to the brutality of the older SNES and Genesis games. So there were new kinds of fighting games made, games that tweaked with convention in order to appeal to a broader audience- sort of like a mid 1990s version of all games today aspiring to be like Call of Duty, but with fighting games. And while the games released then were definitely easier and more moderate than what had come before them, by today’s standards, they are often outright insane and unfair. As is evidenced by the re-release of Capcom’s original Marvel crossover fighters, Marvel Super Heroes, and Marvel vs Capcom: Clash of Superheroes, both re-released in a single package as Marvel vs Capcom: Origins.

Let’s be very clear, just because they are unfairly stacked against you- and they would be, don’t forget that these games come from the arcade era, designed to keep sucking away your quarters- doesn’t mean they aren’t fun. On the contrary, the sheer demanding nature of this game should have you returning to at least the single player portion again and again, as you make it a matter of pride and ego, unable to accept that an ancient game from the 90s could have defeated you. 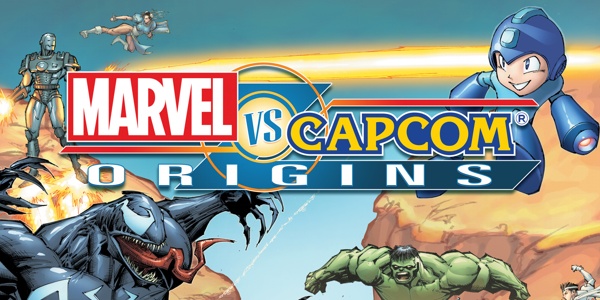 Of course, the character balance isn’t perfect, and Wolverine is still as overpowered now as he was back then. No, they didn’t address the balance issues. They didn’t even touch up the graphics at all, outside of adding some filters (which you can optionally select), and the games are pretty much here in their original forms, unaltered, exactly as they were in arcades back in the day.

So yes, the same hand drawn graphics from before are back. The beautiful pixel art holds up wonderfully well, and you’d be hard pressed to tell the age of these games visually at all. Mechanically, of course, the game demands precision and technique, as it pits you against one of the harder single player modes in a fighting game in recent memory. All the old cries and taunts, grunts, flashy attacks, the game breaking elements like Red Venom and regenerating health, the Infinity Gems and the secret characters, everything is back here, exactly as you remembered it. It’s all untouched, outside of a few visual options to make sure that the game looks how you remember it looking, not how it actually looked. 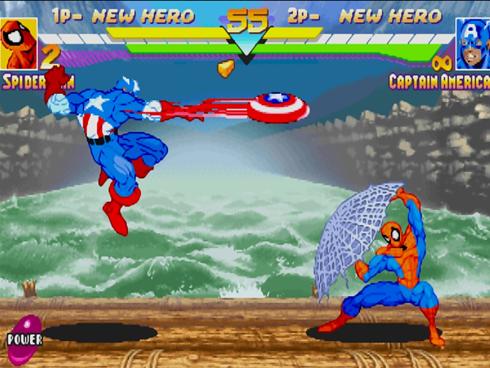 That isn’t to say that there are no changes, of course. No, a fighting game released in today’s day and age without an online mode would be crippled and useless, so, as with many re-releases, this one has been altered to include an online versus mode. Of course, as with the rest of the game, and possibly out of reverence for the source material, the changes are minimal: it’s a basic online matchmaking mode, allowing for 1v1 fights only, and battling online disables the option to choose between Turbo and Normal, relegating fight speed instead to the internet connection. The netcode seems to work fine, and there was rarely much lag.

So outside of some cautious additions to visual options and the multiplayer side of the game, nothing has changed much. Everything is exactly as you remember it, of course.

But what if you don’t remember it? That’s the killer question, see. What if you never had a chance to play these games when they first released?

Well, then it all depends on one factor: did you ever get a chance to play the other 90s era fighters, and just happened to miss out on these two by some unlucky circumstance? Because if that’s the case, then go for it. You’re in for an incredible treat, a blast from the past, the kind of game that you so lovingly remember from your childhood, even as you realize that they just don’t make them like that anymore. However, if you never played any 90s era fighters- and Super Smash Bros. does not count- then stay away from this game. Run away in the opposite direction. This game will reduce you to a heap of sobbing flesh. It’s insane, unbalanced, broken, unfair, hard, stacked against you, too demanding and technical. And you will never be able to appreciate that that is exactly what makes it so wonderful in the first place.

Over time, fighting games got easy. Easier even than these two, which were among the easiest fighting games at the time of their release. But veterans of a bygone era who fondly look back upon a time when games didn’t coddle you, and threw you into the deep end to fend for yourself, those people will find something incredible worth having here. People who remember the golden age of fighters, those people will go starry eyed for Marvel vs Capcom: Origins. People who don’t, because the fighters of that era turned them off, or because they were just too young for games back then, should stay the heck away. The games included in this package are incredible; they are also brutal, and they will hurt if you’ve been too softened by modern games.

Everything from the original games exactly as you remember, untouched, barring the addition of rudimentary online multiplayer, and some visual filters

Everything from the original games exactly as you remember, untouched: by today's standards, the games are broken, unbalanced, unfair

Final Verdict:
GOOD
There are two kinds of people as far as this game is concerned: those who will appreciate it and therefore love it, and those who won't. Know which side you fall on, then decide whether you want this or not.
A copy of this game was provided by Developer/Publisher/Distributor/PR Agency for review purposes. Click here to know more about our Reviews Policy.