The War for Wakanda expansion is a great piece of content for fans of the game, but falls flat in alleviating core issues with the game.

It’s no secret that Crystal Dynamics and Square Enix’s Marvel’s Avengers failed to meet fan expectations. That’s been talked about in length by a number of fans, but what it really boils down to is the disconnect between what Marvel’s Avengers wanted to be and what became of it with its live-service tropes. Thankfully though, Crystal Dynamics and Square Enix are putting in the work to get things right, and that’s quite apparent with the recent release of the latest operation War for Wakanda. It doesn’t rewrite the playbook, but will probably leave some interested fans hopeful for the future.

War for Wakanda sees you taking control of the Wakandan king T’Challa, who is, of course, Black Panther as well. The short-but-still chunky campaign sees the nation battle the army of Ullyses Klaue who wants to exploit the exotic Vibranium for AIM’s purposes. Obviously enough, the Avengers come to Wakanda to help T’Challa against this battle, and the group must work together to overcome all trials and tribulations. 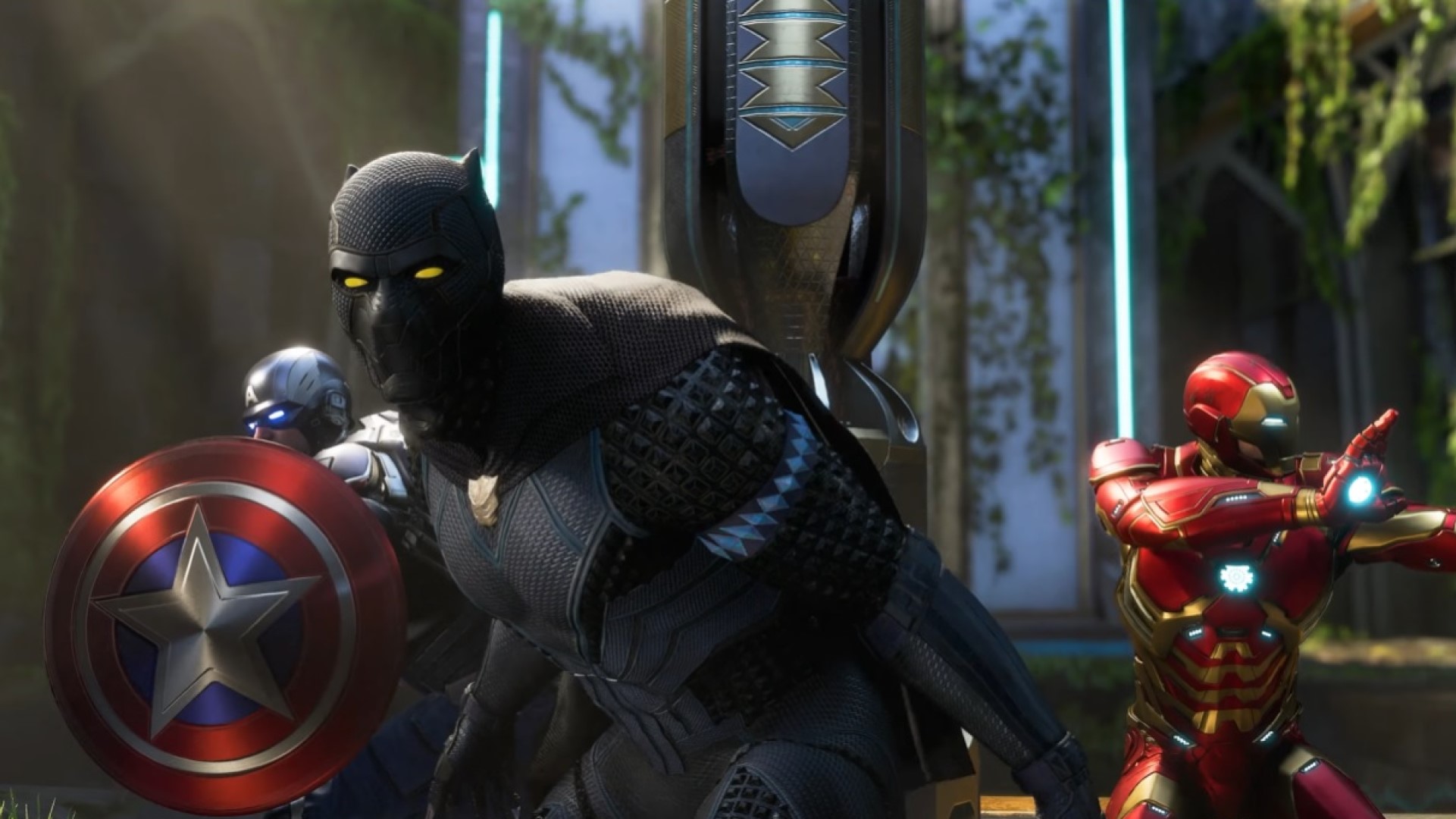 "The short-but-still chunky campaign sees the nation battle the army of Ullyses Klaue who wants to exploit the exotic Vibranium for AIM’s purposes. "

T’Challa and Ullyses go way back, and the plot is well, respectable enough to remain engaged with. T’Challa is quite one-tone in his motivations and ambitions, and is offset by the occasionally hilarious Princess Shura who shares a lot of funny banter with the King. This provides a lot of levity to the otherwise mostly bland plot that feels very self-contained due to the fact that the Avengers don’t have much say or contribution to the proceedings of the narrative. The voice-acting is inconsistent, flipping between convincing and embarrassing at moments unnoticed.

War for Wakanda adds the biome of Wakanda to the game, which looks great on the surface level. While the base of operations that house T’Challa’s throne show a technologically advanced city, the explorable space is the lush and overgrown jungles. While it looks beautiful with great environmental detail, there isn’t much in the name of variety here – as one place mostly blends in with the other. The finale takes place in an automated mining facility, which gives off much of the same vibes as the numerous AIM facilities that players have visited in previous operations.

Playing as Black Panther feels great. The Wakandan king is a careful mix of agility and strength, which results in a character that’s a joy to roll with. Black Panther uses his claws to shred his enemies – and his signature moves include a Vibranium spear that knocks down and stuns enemies for a short while as well as a flurry of Kimoyo beads that unleash a flurry of blows to opponents. His ultimate summons the spirit of the Panther and gives buffs to Black Panther’s damage and resistance stats for a few seconds. T’Challa can also use throwing knives to deal damage from afar, which is a powerful action executed in a great fashion with the use of adaptive triggers on the PlayStation 5. Black Panther’s skill tree is great too, featuring a plethora of combos and new attacks – some of which can be genuinely useful in battles. 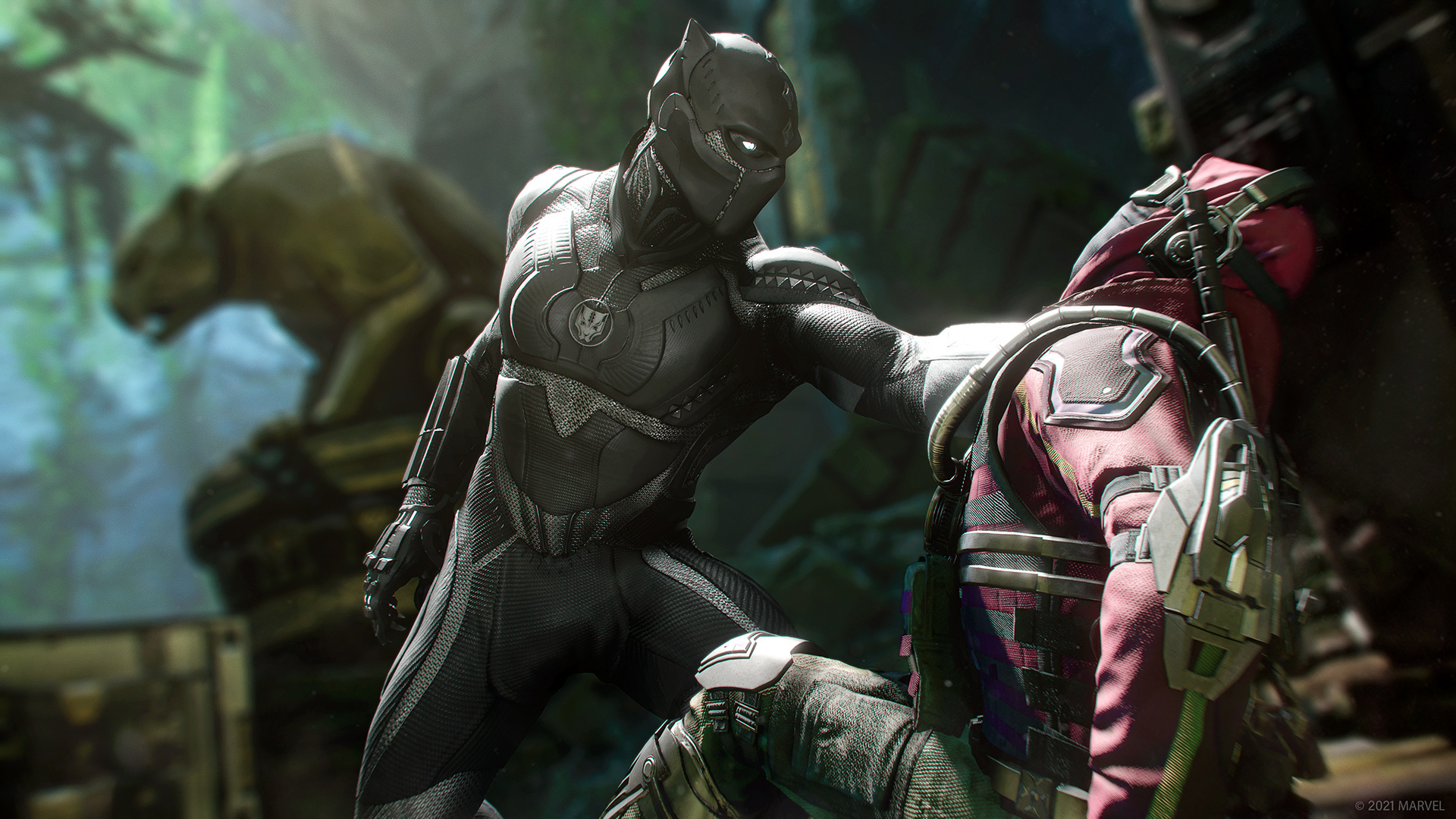 "The Wakandan king is a careful mix of agility and strength, which results in a character that’s a joy to roll with. "

The core combat has always been Marvel’s Avengers strongest suit, so it isn’t entirely surprising that Black Panther feels great to play. But much like what’s been done in the past, a lot of this thoughtful combat design goes to the wayside in favor of enemies that are best defeated by continually spamming the attack button. Executing combos can deal some added damage that can be pretty useful in certain situations, but the game will often task you with defeating large waves of enemies that get too cramped up for certain interiors and the best course of action seems to resort to spamming. Enemies in a similar way, start off great that require some thoughtful thinking and use of the moveset to defeat, but later parts of the campaign feature damage sponge enemies that just aren’t interesting to fight. A gargantuan robotic spider certainly seems daunting and intriguing at the same time, until you realize that defeating it is a matter of attacking for minutes on end until it succumbs to your punches.

The two boss fights in the War for Wakanda expansion are well, fine enough. In true Marvel’s Avengers fashion, they are mostly based around a central gimmick of sorts, and bosses aren’t exactly tricky to take down. A new boss puzzle introduced in the game are the FUSEs, which are gargantuan devices that require multiple steps in order to take down. The FUSE structure is surrounded by a plethora of high-level enemies which can become a slog to go through. The fight in the conclusive mission of the expansion is so cluttered that it’s really easy to get cornered by these high-level enemies and be beaten down to a pulp in mere moments. This can be especially annoying and might require a bit of rebalancing updates to iron these issues out. 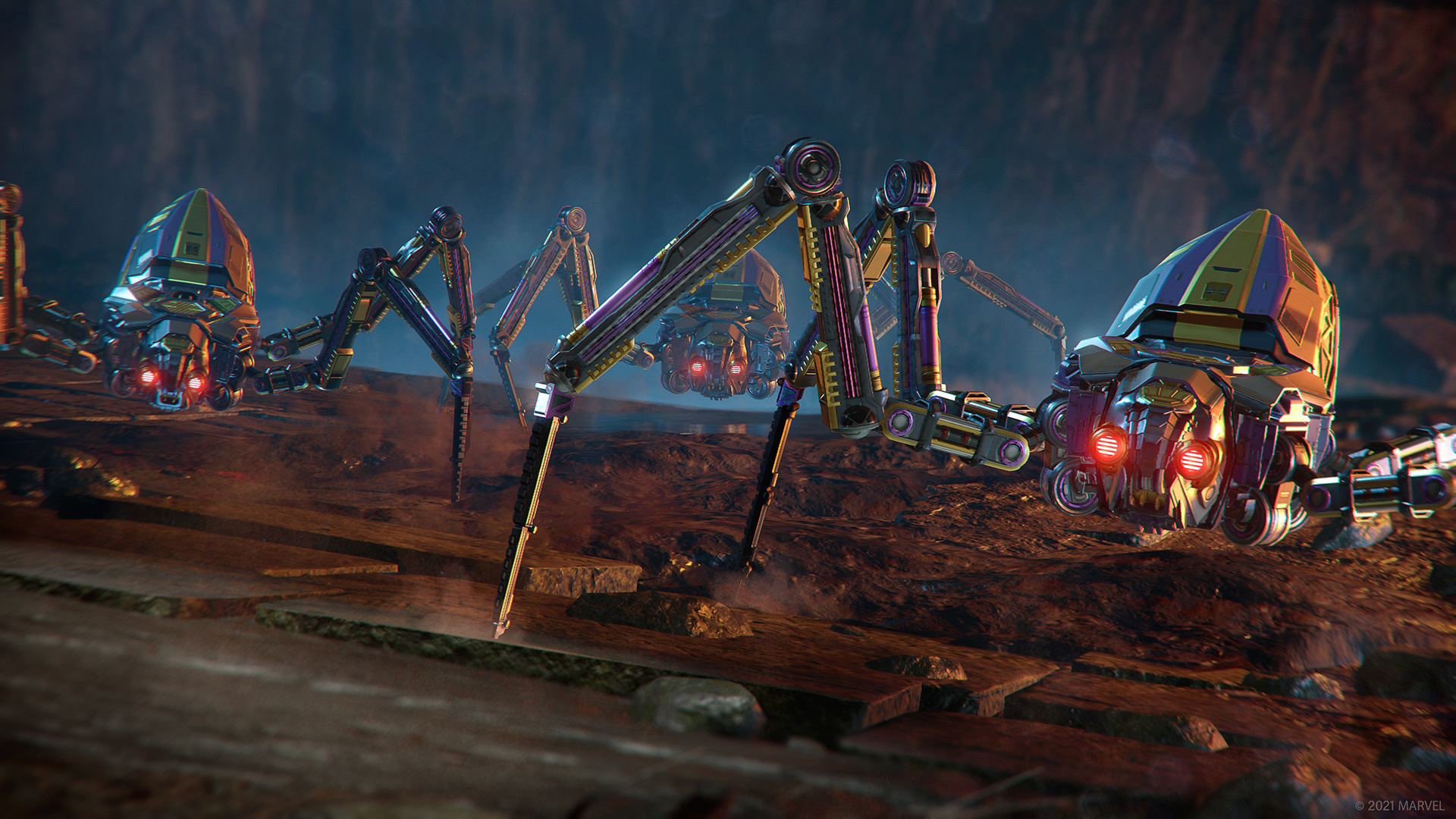 "A gargantuan robotic spider certainly seems daunting and intriguing at the same time, until you realize that defeating it is a matter of attacking for minutes on end until it succumbs to your punches."

Aside from the added content with the story missions, War for Wakanda does little to nothing to alleviate the issues that still plague Avengers to this date. It’s honestly baffling that a game so reliant on looting and building out gear sets has such bland loot. The loot is doled out very frequently, and the stark level gaps between them give little incentive to hold onto a particular piece of loot and keep upgrading it constantly. The challenge missions are still the same – defending objectives, defeating enemies…you get the gist.

An ace-up War for Wakanda’s sleeve is the fact that it is still a relatively meaty chunk of DLC. There are a handful of story missions – each of which takes anywhere from 30 to 45 minutes to complete. There are a number of chests and enemy encounters hidden throughout each level, tracking which can extend the completion time marginally higher. It took me around 5 hours to reach the story’s conclusion, which is respectable enough for a free update.

Despite offering more of what came before, Marvel’s Avengers Operation: Black Panther – War for Wakanda is a solid chunk of story content that’s enjoyable for its short run time. The story is simplistic but has some charm that makes you want to root for these characters. Black Panther is a great addition to the playable roster, ripe for downing enemies with carefully chained combos. As mentioned before, many of the annoying oversights present with the core experience are still there, and War for Wakanda doesn’t magically change the game in any way whatsoever. Given the fact that War for Wakanda was touted to be Marvel’s Avengers first proper expansion, Crystal Dynamics and Square Enix have decided the game’s future direction – which is to focus more on story content and less on actual fixes to the problems with the game’s live-service nature.

Final Verdict:
FAIR
The War for Wakanda expansion falls flat in alleviating core issues with the game.
A copy of this game was provided by Developer/Publisher/Distributor/PR Agency for review purposes. Click here to know more about our Reviews Policy.