Marvel’s Spider-Man: Miles Morales launching so soon after Spider-Man released for the PS4 is a welcome surprise, to say the least. And while we’re going to have to wait for the full numbered sequel and for Peter’s story to take its next big step forward, the upcoming standalone sequel still looks like an exciting instalment in the series. The 2018 PS4 game was, in many ways, Miles’ origins story, so seeing him properly take on the role of Spider-Man in a story that will put the spotlight on him is certainly going to be interesting.

And so, before we do that less than a month from now, here, we’ll be taking a look back at the events of Marvel’s Spider-Man, focusing specifically on Miles, and tracking his entire journey to refresh our memories before his own new game comes along.

This goes without saying, but let’s say it anyway- there are major spoilers ahead for Marvel’s Spider-Man.

While Peter Parker is very much the most prominent character in Marvel’s Spider-Man, the game features a pretty big and solid cast of supporting characters- of them, the fifteen year old Miles Morales is perhaps one of the most crucial. His first appearance in the game is a brief one- Miles, who’s a diehard Spidey fan, is seen recording a video on his phone of Spider-Man going up against Demons and stopping a helicopter from crashing in the city.

Miles’ real introduction into the actual narrative, however, comes through his father, Jefferson Davis, who’s a cop in the NYPD. In the early hours of the game, Davis helps Spider-Man with an investigation of one of Wilson Fisk’s shipyards, which leads to a fight with the Demons, which, in turn, leads to the apprehension of said Demons. Davis is injured in the process, but lauded as a hero. 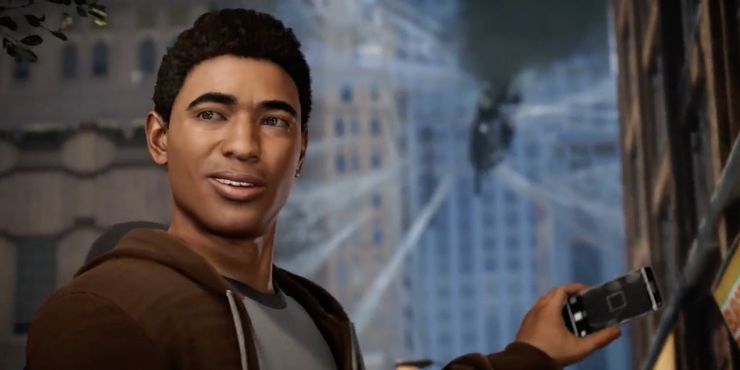 Good old Norman Osborn, New York’s Mayor who’s up for re-election, uses this event to further his campaign, and holds a ceremony in front of City Hall to honour Davis with a medal, with his wife and their son, Miles, both in attendance to witness it. The ceremony, however, is attacked by a group of Demons, led by Mister Negative himself.

Davis attempts to shield other police officers from bomb explosions, and ends up sacrificing his life in the process. Miles, as you can imagine, is shaken up (to say the least) by the incident and the loss of his father, but Peter, who knows all too well how it feels to lose a father figure, wants to help. He tries reaching out to Miles, and though he initially fails, with the help of Aunt May and Miles’ mother, he successfully persuades him in agreeing to volunteer at the F.E.A.S.T. shelter where Aunt May works (and which is operated by none other than Martin Li, incidentally), where Peter hopes that through his work, Miles will be better able to process and deal with his grief.

Things quickly go wrong in New York, however, as they often do in Spider-Man stories. With Mister Negative’s help and under Doctor Octopus’ leadership, several of Spider-Man’s fiercest enemies – Scorpion, Vulture, Rhino, and Electro – break out of the Raft, and Doc Ock also uses this opportunity to steal Devil’s Breath- a lethal, virulent bioweapon that Oscorp accidentally created while trying to create cures for genetic diseases (later, it is revealed that the cure was being developed for Harry Osborn).

Doctor Octopus releases Devil’s Breath in Times Square, the Sinister Six are set loose on New York, and convicts from the Raft are running amok as well. Spider-Man fights an uphill battle as he retakes the city bit by bit, but has support from both Miles and MJ along the way. From helping out the influx of people coming to F.E.A.S.T. for help, to saving Peter during an attack on the shelter, to even having his own stealth section involving Scorpion and Rhino, Miles helps out Peter throughout the course of the story in various ways. 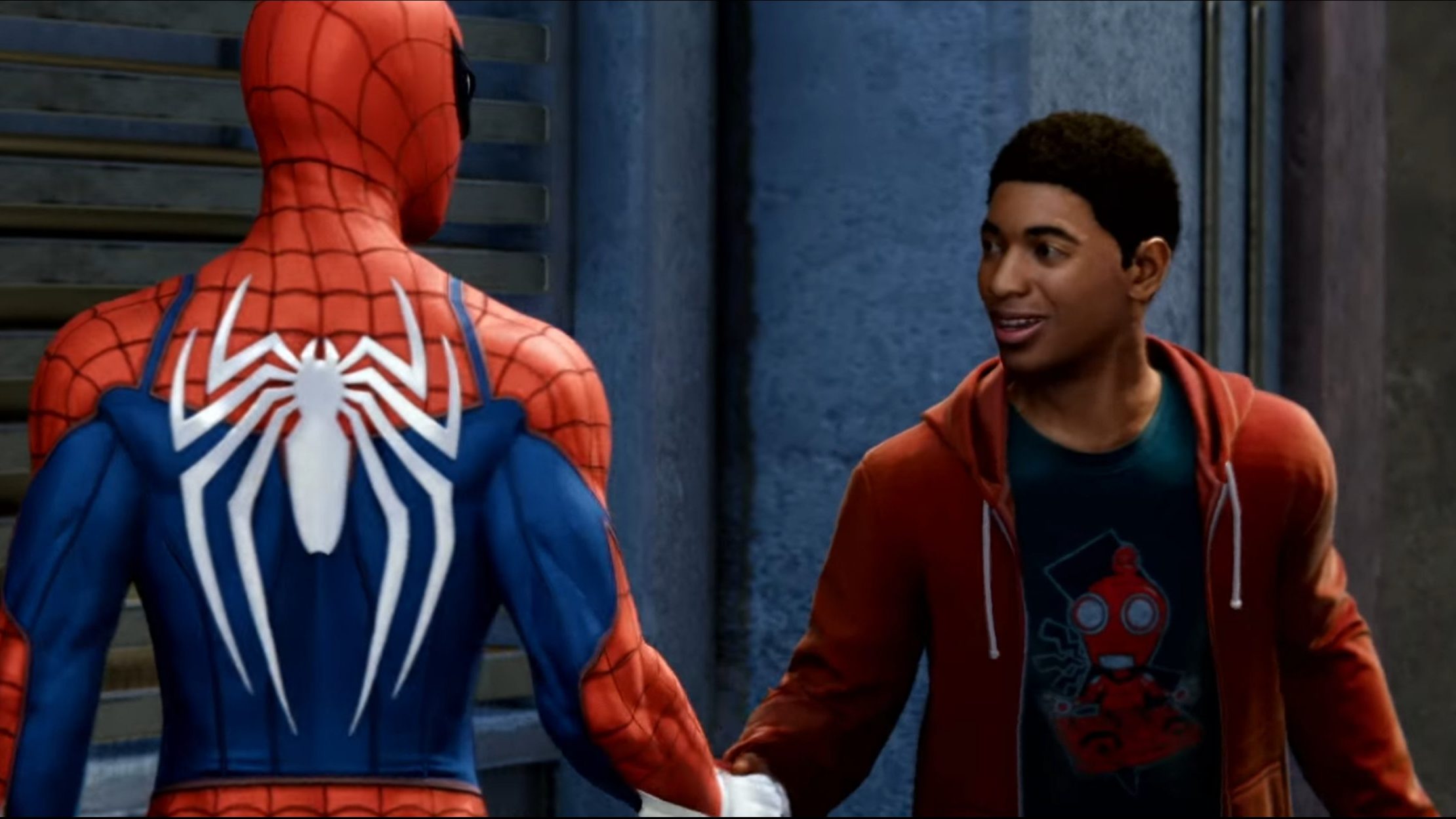 But other, far more crucial things happen with him along the way as well. At one point in the game, MJ infiltrates Norman Osborn’s penthouse to dig up information on Devil’s Breath, and though she manages to make it out with the needed info (with an assist from Spidey at the end), she unknowingly also brings back a genetically modified Oscorp spider that escapes from Osborn’s secret lab. That spider eventually crawls its way onto Miles when MJ returns to the F.E.A.S.T. shelter, and bites him.

And that, of course, is how Miles gets his powers. At the end of the game, some months after Peter has dealt with the Sinister Six, Doctor Octopus, and Devil’s Breath, Miles tells Peter about these powers, revealing them to him by jumping up to the roof and sticking from it upside down. Peter responds by revealing his own powers to Miles in similar fashion.

Following that, Miles doesn’t physically appear all that much in the three expansions in The City That Never Sleeps, but his story does see some interesting progress. Throughout the three DLCs, we learn that Miles is beginning to explore with his powers, and that eventually, he begins training with Peter in how to use them. Initially, Peter is reluctant to do so, and he warns Miles that his powers come with a lot of responsibility (which I’m sure are words Spider-Man fans are sick of at this point), but does eventually agree to start training him. 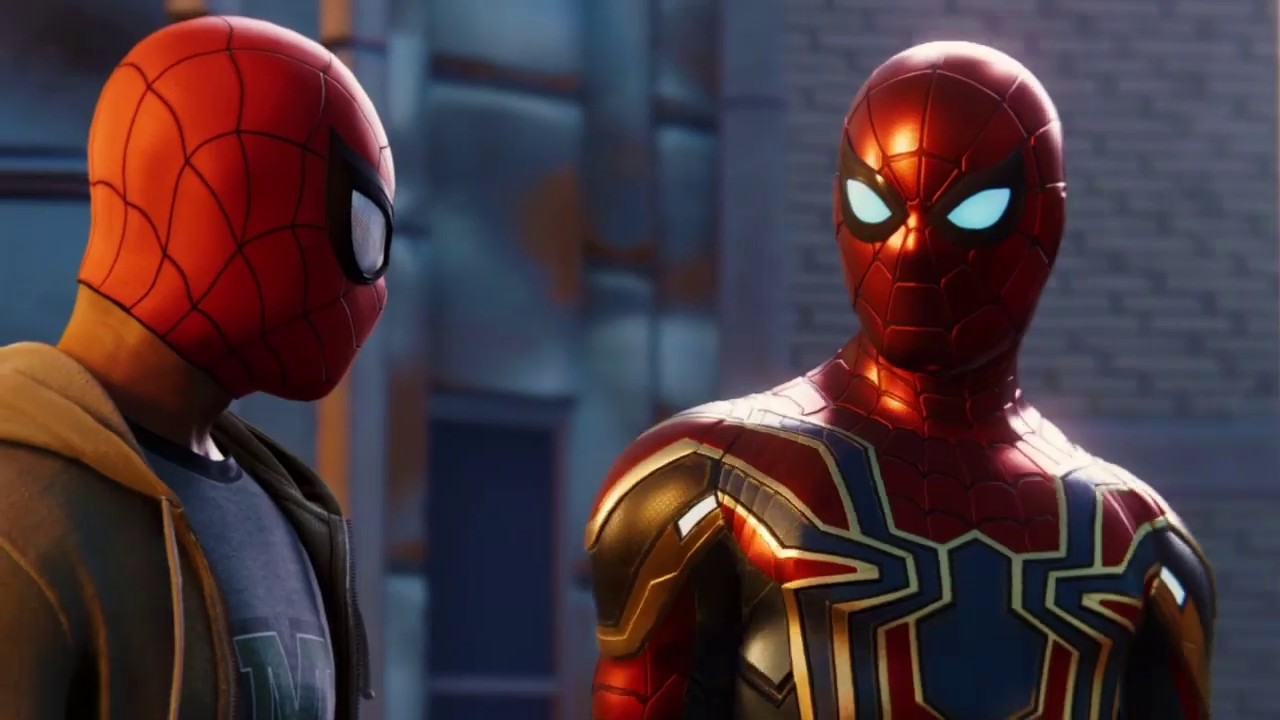 Marvel’s Spider-Man: Miles Morales is going to pick up a year after the events of the final DLC, Silver Lining. By now, Miles has been training with Peter for a year, and his fully stepped into the role of another one of New York’s protectors as another Spider-Man. We know that as the game begins, Miles’ mom is campaigning for City Council, and we also know that Roxxon Corporation and the Tinkerer-led Underground are going to be the main antagonists in the story. Beyond that, there’s quite a bit we don’t know. How will Miles’ story progress? How crucial to the series’ larger story is this game going to be? How prominent will characters like Peter, Norman Osborn, or MJ be in the story?

Clearly, we have a lot of questions, and we can’t wait to learn the answers. Marvel’s Spider-Man: Miles Morales is out for PS5 and PS4 on November 12.